What is Turkish army really doing in Iraq?

It is not clear who will take control if Mosul is liberated from the Islamic State, but Turkey and its allies want nothing more than to prevent the Kurds from declaring a semi-autonomous state in the region. 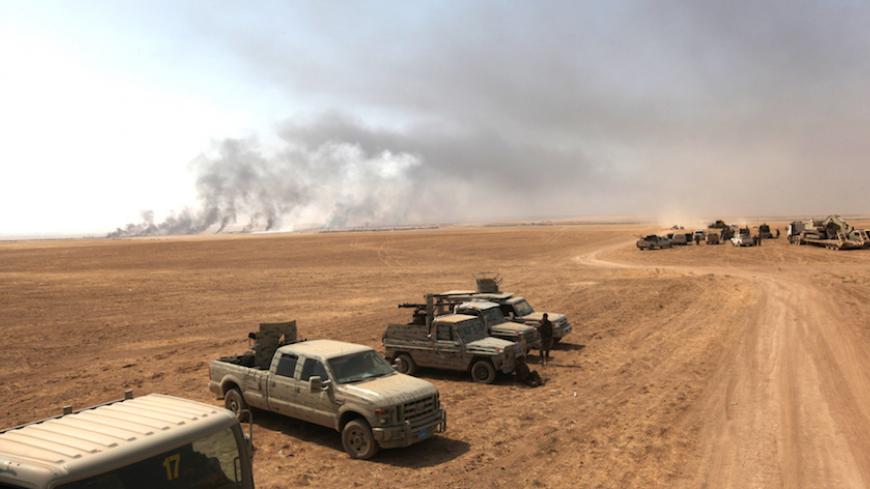 Military vehicles of the Kurdish peshmerga forces are seen on the southeast of Mosul, Iraq, Aug. 14, 2016. The Turkish-backed Hashd al-Watani, a predominantly Arab Sunni militia, is working in cooperation with the peshmerga as they advance on Mosul. - REUTERS/Azad Lashkari

A cannon shot roared into the night. The target was in the town of Bashiqa in northern Iraq, seized by the Islamic State (IS) in 2014. Seconds after the explosion, the clatter of a collapsing building echoed in the mountain.

For months now, the Turkish army has repeatedly targeted IS from positions they hold 15 kilometers (9 miles) northeast of Mosul.

“The main goal of this base is to fight against Daesh [Arabic acronym for IS],” one Turkish soldier told Al-Monitor on condition of anonymity. “We deployed some fire-support vehicles, artillery, tanks and mortars, among other things, to destroy them,” he added.

According to the soldier who was reading from a statement, Turkish troops deployed in northern Iraq have eliminated numerous targets, including 602 fighters, 416 buildings used by the Sunni hard-line group, 83 armored vehicles and 17 artillery positions.

Beyond its direct engagement against IS, the Turkish army is also training and arming Hashd al-Watani, a predominantly Arab Sunni militia created by Atheel al-Nujaifi, the former governor of Ninevah province and, along with his highly influential family, a close Turkish ally.

“We train them for close quarter combat, which will take place in Mosul in the near future,” the Turkish soldier said, adding that local fighters were all provided with AK-74s and ammunition.

In a country where the number of militiamen fighting for a religion, an ethnic group or a region seems to be growing by the day, Hashd al-Watani’s leaders do not shy away from voicing their ultimate prize: capturing the IS de-facto capital in Iraq. “Mosul is ours. If we get inside, all of it will be for us,” Brig. Gen. Mohamed Tahma Talib, who is commanding Hashd al-Watani, told al-Monitor.

To be able to reach the outskirts of the city, Hashd al-Watani is working in cooperation with the Kurdish peshmerga, the army of the Kurdistan Regional Government (KRG).

According to peshmerga Gen. Bahram Arif Yassin, stationed at Bashiqa Mountain, the Kurdish forces will seize the town of Bashiqa and advance toward Mosul, paving the way for the Ankara-backed fighters.

“We will recapture the area around Mosul. We will [stop] 2 kilometers [1 mile] from the city. And then,” Yassin said, “we will open a way for Hashd al-Watani to go inside Mosul.”

Dismissed by Iraqi parliament members for corruption and alleged complicity with IS, Nujaifi has since found exile in Erbil, the capital of the autonomous Kurdish region. Like most Sunni leaders, Nujaifi initially opposed Kurdish autonomy, which he saw as a first step toward total independence.

“Our relation with the KRG is not like before. We have a positive relationship now,” Nujaifi told Al-Monitor, referring to the peshmerga and Kurdish de-facto President Massoud Barzani as “allies.”

“We wait for the peshmerga to do their part, and then our role will start,” he said. Now, Nujaifi argues that the Ninevah region should follow the lead of its Kurdish neighbors and transform itself into a semi-autonomous region as well.

Turkey, the KRG and Nujaifi’s partially colluding interests have led to a “marriage of convenience” to better secure their interests at the moment and eventually during the political vacuum that could follow Mosul’s liberation, according to Renad Mansour, an El-Erian fellow at the Carnegie Middle East Center.

“He [Nujaifi] still considers himself as someone who will return, who will have a big homecoming in Mosul. … He seems to be sort of trying to fight a military war, a political war, and obviously he is getting a lot of support. So you have this really odd sort of triangle of Nujaifi, Barzani and Turkey working together,” Mansour said.

“Turkey wants to maintain some form of regional power in these parts. Particularly now, it will have to start using proxies even more. … Turkey needs to rely on allies, and typical allies Turkey has had in northern Iraq have been the Barzanis and also the Nujaifis,” he added.

In 1994, a civil war erupted between the two main Kurdish factions in the north: the Kurdistan Democratic Party (KDP), which is the political party of the Barzani clan, and the Patriotic Union of Kurdistan, which was aligned with Iran and Ankara’s long-time enemy, the Kurdistan Workers Party (PKK). That war paved the way “for an open-ended Turkish presence at several Iraqi bases with the KDP's tacit and gradually open cooperation,” an analysis published by the Washington Institute stated.

Last December, when Turkey deployed an additional 150 troops and 25 tanks to positions close to IS-held Bashiqa without asking Baghdad for permission, Iraqi Prime Minister Haider al-Abadi’s office called the action a “serious breach of Iraqi sovereignty,” and later threated to take the matter to the UN Security Council. It was Erbil that had reportedly leased Ankara the rights to the Bashiqa military camp.

While Ankara has been nurturing over the years an economically and politically profitable relationship with the KRG, it has been repeatedly pounding Kurdish groups in Turkey and Syria, including the People's Protection Units, one of the main ground forces battling IS.

Ankara’s viewing a Kurdish state as a bigger threat than IS has led to numerous accusations of its tacit support for the self-styled caliphate.

On Sept. 4, the rebels — mainly Syrian Arabs and Turkmens fighting under the banner of the Free Syrian Army (FSA) — took control of the frontier between Azaz and Jarablus after seizing 20 villages from IS, the Turkish military said in a statement. But Turkey’s perceived inability — or unwillingness — to clear until now its border to prevent the stream of foreign jihadists pouring into Syria from Turkey has been a cause of concern.

“They have actually, some would argue, helped facilitate [IS] in Syria at a certain point — maybe not directly, but indirectly through porous border management. In any case, it seems like now the No. 1 priority for Turkey would be to limit the PKK,” Mansour said.

While the Turkish-backed FSA aim at Syrian Kurdish fighters, Turkish-backed Hashd al-Watani is working in cooperation with Kurdish peshmerga as they advance toward Mosul. But the militia still needs to prove its military capability, said Gen. Sirwan Barzani, a nephew of Massoud Barzani and the commander of a 120-kilometer-long (75-mile-long) front line east of Mosul. “They are not good fighters for an offensive,” he told Al-Monitor, “but they are from the region; they are good for holding [recaptured] ground.”

With the support of Turkey, Nujaifi’s private army could soon demonstrate what it is capable of as the eventual battle for Mosul draws closer. But for Lt. Gen. Najim al-Jibouri, leading the Iraqi army offensive to retake IS' last stronghold in the country, Hashd al-Watani will have to follow his command.

“The prime minister told us about Hashd al-Watani. He wants them to fight with us under the Iraqi flag,” Jibouri said, “not under any other flag.”