The dispute between Turkey and Iraq over the presence of Turkish troops near Mosul is threatening to derail the impending offensive to free the city from the Islamic State. 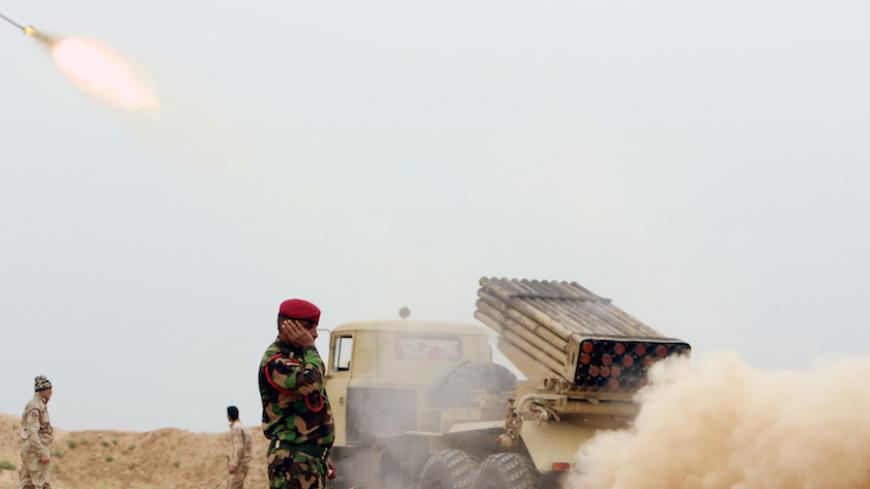 Iraqi soldiers fire a rocket toward Islamic State militants on the outskirts of Makhmour, south of Mosul, July 20, 2016. - REUTERS/Azad Lashkaril

Escalating tensions between Turkey and Iraq are threatening to further disrupt the long-awaited campaign against the Islamic State in Mosul, as Iraqi Prime Minister Haider al-Abadi warned of “regional conflict” over the continued presence of Turkish troops in Northern Iraq.

Turkey’s parliament voted Oct. 1 to extend the mandate of thousands of Turkish troops inside Iraq and Syria, sparking an outcry in Baghdad. “We have asked the Turkish side more than once not to intervene in Iraqi matters and I fear the Turkish adventure could turn into a regional war,” Abadi told Iraqi state television.

Ankara insists that its troops are deployed in its former Ottoman dominions to combat “terrorist organizations,” meaning the Islamic State and the Kurdistan Workers Party (PKK). There is mounting concern over a possible confrontation between Turkish forces and the Iraqi Popular Mobilization Units (PMU), the predominantly Shiite paramilitary militias that are likely to seek credit for liberating Mosul.

Turkish Prime Minister Binali Yildirim told the Turkish Parliament on Oct. 4 that the operation to wrest Mosul from IS could spark Shiite-Sunni fighting if the city were placed under Shiite control. Turkey’s president, Recep Tayyip Erdogan, had earlier inflamed Iraqi sensibilities when he told an Emirati news channel that once Mosul, the capital of Ninevah province, is liberated, “only Sunni Arabs, Turkomens, and Sunni Kurds” should be permitted to remain in the city.

Iraq’s parliament responded by demanding that Turkish troops quit their country immediately. The United States is also as firmly opposed to Turkish as it is to Shiite PMU participation in the Mosul campaign.

Turkey has deployed several thousand troops in northern Iraq since the 1990s in a bid to hem in the PKK. The group’s top commanders are ensconced in the Qandil Mountains separating Iraq from Iran. Turkish fighter jets regularly pound PKK bases in Qandil to little effect, and Iraq has rarely made much of a fuss. Baghdad went beserk, however, when Turkey deployed a fresh batch of special forces backed by around 20 tanks to Bashiqa, a town north of Mosul, in December.

Abadi's government complained to the United Nations and secured unanimous support from the Arab League for an immediate Turkish withdrawal. Ankara has refused to budge, however, leaving the embattled Abadi looking even weaker.

Turkey’s official explanation is that its special forces are in Bashiqa to protect Turkish military personnel who are training Sunni Arab forces loyal to Atheel al-Nujaifi, the former governor of Ninevah. The Arab fighters are expected to help “hold” Mosul once it is freed. The immediate reason for the Turkish buildup is to deter the PMU militias from entering Mosul. Turkey also wants to counter any moves by the PMU to avenge Shiites in Tuz Khormato, a mainly Turkmen town from which Shiites were chased by Sunnis when IS seized control.

Turkey is equally wary of PKK designs on neighboring Sinjar. The group muscled into the area to help rescue thousands of Yazidis from imminent slaughter by IS in August 2014. The PKK has since been helping the Yazidis form their own military units and local councils there, all part of an effort to expand its influence in Northern Iraq. Baghdad is allegedly encouraging such moves in a bid to steer the Yazidis away from the Iraqi Kurds, who claim Sinjar for their own.

All of this leaves Washington stuck between the competing interests of Iraqis, Turks and Kurds — all allies in the battle against IS. Its efforts to reconcile Turkey and Iraq seemed to be yielding fruit this summer after a series of meetings between Turkey’s spy chief, Hakan Fidan, Iraq’s national security adviser, Faleh al-Fayadh, and President Barack Obama’s envoy to the anti-IS coalition, Brett McGurk. The sides struck a tentative deal whereby Turkey would withdraw its troops from Bashiqa after Mosul is “stabilized.” After the latest flare up, that deal appears destined for the dustbin.