Abadi says 'we are ready' if Turkey wants war

As Turkey's behavior grows more erratic and aggressive by the day, the United States is scrambling to head off a dust-up among its anti-Islamic State coalition partners. 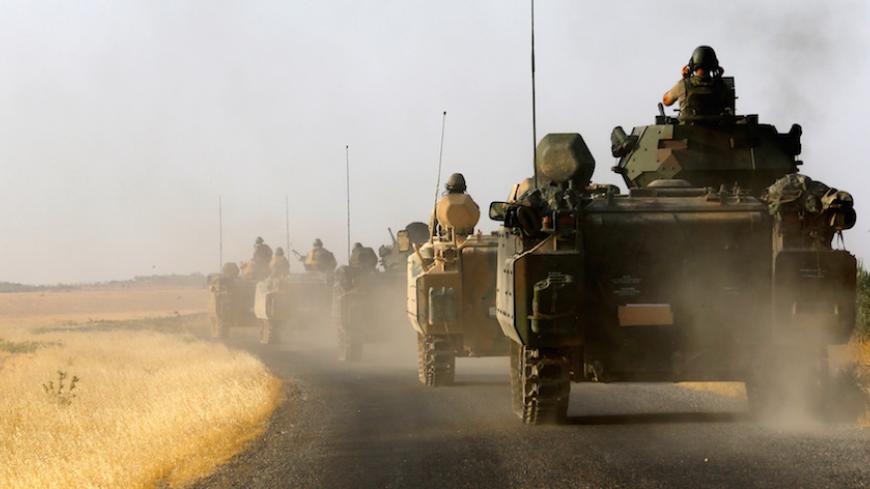 Turkish armored personnel carriers drive toward the border in Karkamis on the Turkish-Syrian border in the southeastern Gaziantep province, Turkey, Aug. 27, 2016. - REUTERS/Umit Bektas

What is Turkey up to? The question gained fresh urgency today as Turkish Defense Minister Fikri Isik and Land Forces Commander Gen. Zeki Colak inspected troops in Hatay near the Syrian border a day after Turkish forces backed by tanks and other combat vehicles massed near the town of Silopi on Turkey’s border with Iraq. In a related development, Turkey’s chief of general staff, Hulusi Akar, flanked by the country’s powerful spy chief, Hakan Fidan, met with his Russian counterpart, Valery Gerasimov, in Moscow to talk about Syria.

“Turkey may start a series of shocking interventions,” predicted Ibrahim Karagul, the editor-in-chief of the pro-government Yeni Safak, in a column today.

"Turkey is preparing itself for all contingencies” with regard to the developments in the region, said Isik Nov. 2. “Turkey respects Iraq’s territorial integrity, but [Ankara] is determined to ward off any terror threats arising from Iraq,” he added.

Iraqi Prime Minister Haider al-Abadi reacted harshly to the Turkish moves. “We do not want war with Turkey," he said Nov. 1. “But if a confrontation happens we are ready for it. We will consider [Turkey] an enemy and we will deal with it as an enemy.”

Pouring oil on the flames, Turkish Foreign Minister Mevlut Cavusoglu addressed Abadi, saying, "If you have the strength, why did you surrender Mosul to terror organizations? If you are so strong, why has the [Kurdistan Workers Party] occupied your lands for years?”

A Western official told Al-Monitor on strict condition of anonymity that the possibility of a military confrontation between the members of the anti-IS coalition was being treated seriously. “While we still view it as unlikely, Turkey’s increasingly erratic and unpredictable behavior means that we cannot rule it out,” the official said. All of this conflict is draining energy away from what should be the anti-IS coalition’s main focus, the battle for Mosul.

Abadi is said to be urging Washington to flex its military muscles to deter a Turkish incursion. But doing so would thrust the United States into the awkward position of treating a critical NATO ally as a hostile force. It would also add to existing tensions with Ankara over Washington’s support for the Syrian Kurdish militia known as the People’s Protection Units (YPG). Turkey denounces the group as “terrorists” over its tight links with the Kurdistan Workers Party (PKK).

Turkey already has several hundred elite troops stationed in Mosul and insists that it must take part in the ongoing campaign to retake the city. Abadi rejects Turkey’s participation and wants its troops to leave immediately.

Turkey refuses to budge on several counts. It believes its military presence gives it leverage over future governance plans for Mosul. More immediately, though, Turkey frets that the Shiite Popular Mobilization Units (PMU) may target Sunni Turkmens in neighboring Tal Afar over their role in expelling — and killing — thousands of Shiite Turkmens when IS took Tal Afar in 2014.

Turkey also believes that several hundred PKK fighters based in the nearby Yazidi stronghold of Sinjar may collude with the PMU to further entrench itself in the area, creating a strategic bridgehead from Iraq to YPG-controlled territories in Syria. Echoing the prevailing view in Ankara, Karagul argued that this is all part of a broader Iranian scheme to cement its own influence along Turkey’s borders.

In an editorial for the Woodrow Wilson Center, British academic Gareth Stansfield agreed that the PKK would wade into Tal Afar “because they could be encouraged by the [Shiite] militias’ leadership to further antagonize Turkey,” and that “there is no better way of challenging the Turkish state than with the PKK.”

Turkey’s hawkish President Recep Tayyip Erdogan has repeatedly vowed to resort to military means to prevent such a thing from happening if need be. Turkey’s incursion into northern Syria in August was as much to uproot IS from its borders as to prove that when it comes to the PKK, Turkey is willing to put its boots where its mouth is.

Washington is scrambling to head off a dust-up in Iraq. But its efforts to get the PKK to move out of Sinjar have met with stiff resistance from the PKK leadership. It remains unclear whether Washington would be prepared to use its leverage over the YPG to get the PKK to be more cooperative at a time when it needs the Syrian Kurds' participation in a planned offensive against IS’ Syrian stronghold, Raqqa. Stansfield concluded that with the PMU now pushing toward Tal Afar, “the scene is set for an extremely dangerous episode to unfold.”