Tal Afar wary and wedged between Iran, Turkey and PKK

The Turkmen-majority city of Tal Afar remains sparsely populated and wary of outsiders a year and a half after being taken from the Islamic State. Geopolitical considerations and the nearby presence of the PKK, the Syrian border, the desert and mountains mean that operations continue in the area despite apparent calm. 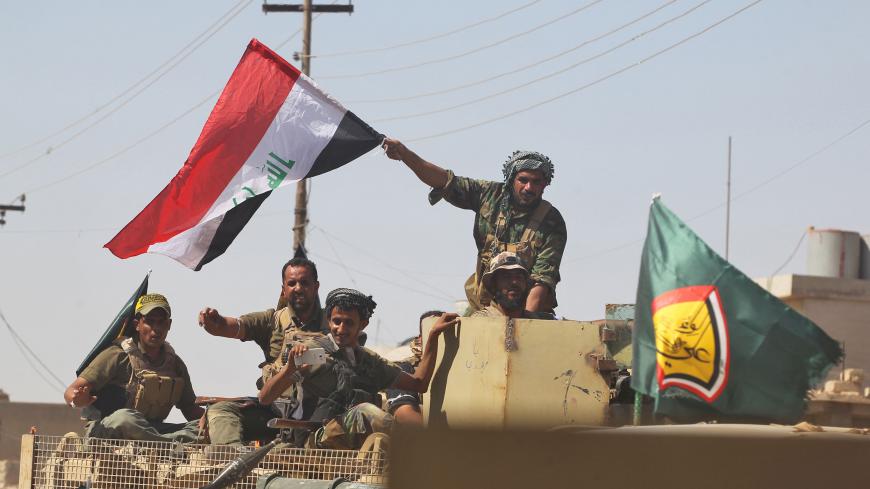 A fighter of Hashid Shaabi (Popular Mobilization Units) waves an Iraqi flag from an armored vehicle during the advance on the town of Tal Afar, Iraq, Aug. 26, 2017. - AHMAD AL-RUBAYE/AFP/Getty Images

TAL AFAR, Iraq — Along a strategic road linking Mosul to Syria and near Sinjar in northern Iraq, the predominantly Turkmen city of Tal Afar has seen relatively few of its inhabitants return over a year and a half after liberation from the Islamic State (IS).

The former Ottoman stronghold — with an estimated pre-war population of 300,000 and near both a vast desert and mountains containing IS tunnels upon which airstrikes continue to be conducted — has for years been a source of tension between Iran and Turkey.

Turkey was staunchly against any involvement in the city of the Shiite-led Popular Mobilization Units (PMU) during the anti-IS campaign, with Turkish President Recep Tayyip Erdogan warning, "Tal Afar is a very sensitive issue for us."

Many of the PMU have close ties to Iran.

When it became clear that the PMU would, in fact, be the main forces involved in retaking the city in mid-2017, some Turkish media claimed the city would become a corridor for the Kurdistan Workers Party (PKK), which is listed as a terrorist organization in Turkey, the United States and the European Union.

Turkey has recently said Iran will collaborate in joint operations against the PKK. Whether Iran, which has also conducted operations against a PKK affiliate in its northwest, will actually do so has been questioned. Similar announcements have been made several times in previous years.

On March 17, the Iraqi military reportedly suffered casualties and clashed with PKK fighters after refusing to let them through a checkpoint without security clearances near Sinjar, where there are local armed groups trained by the PKK. The PKK is also closely allied with the People's Protection Units, which leads the US-backed Syrian Democratic Forces on the other side of the border.

Tal Afar was an al-Qaeda stronghold in the post-2003 period and is the native area of many IS fighters and judges.

The city had a Sunni Turkmen majority prior to 2014 but a significant number of Shiite Turkmens as well, with Turkmens being the primary language of both. Tal Afar enjoys "very good security" now, Mayor Qassem Mohammed al-Sayyid Wahab told Al-Monitor in an interview at his office Feb. 20.

But only about "22% of the approximately 300,000 inhabitants have returned," he noted, for "various reasons."

Al-Monitor was required to get express permission from the Ninevah Operations Command, contact a PMU in the city and spend a significant amount of time at an army checkpoint while waiting for additional permissions before being allowed to enter the city.

Sheikh Mohammad Nasser al-Bayati, a Tal Afar native working with al-Abbas Combat Division of the PMU, stridently railed against "external meddling" in the region in an interview in Tal Afar with Al-Monitor on Feb. 20.

"We need support, not outside interference," he repeatedly stressed.

On a major joint anti-IS operation in nearby mountains two days before that included coalition airstrikes and ground troops, Bayati said they were part of "ongoing operations." He added, "We are keeping our activities out of the media. It's better. The media doesn't help against IS."

Bayati said that in addition to in Tal Afar, al-Abbas Combat Division had forces in Nukhaib, Samarra, Karbala, Diyala, Bashir and Sinjar.

He had been studying in a Shiite seminary in the south when Grand Ayatollah Ali al-Sistani issued the 2014 fatwa calling on citizens to fight IS. At that point, he joined al-Abbas Combat Division, he said.

Roughly a month and a half after Mosul was retaken by Iraqi forces, the PMU — which had meanwhile surrounded IS-held Tal Afar — were at the forefront of liberating it on Aug. 31 after only a few days of fighting.

They have remained in and around the city ever since. They claim their bases are outside the center with only the police bearing responsibility for security inside it. Offices with PMU logos can be seen throughout the city, however.

PMU flags, posters extolling the "martyrs" of the Shiite-led PMU and "Ya Hussein" banners adorn the entrance to Tal Afar.

The relatively limited destruction wrought by the fighting has been credited to an escape corridor reportedly planned by the military so as to allow IS fighters to flee to the desert. Peshmerga forces later arrested hundreds.

Damage seen in the city is mostly from IS, locals noted, such as an enormous destroyed minaret of a Shiite mosque that lies on the ground — now being climbed over by children going to the market — and a small cemetery of a Shiite-majority tribe that had headstones knocked over and blown up.

Down the road is a damaged Sunni mosque that is closed now, Bayati told Al-Monitor, with a black flag flying from its soaring minaret. It has been padlocked and bears a large hole in it from the fighting.

Mayor Sayyid Wahab, a Shiite Turkmen, told Al-Monitor he had been an officer under Saddam Hussein until 1992. Then he turned his energies toward other pursuits until the post-2003 period, when initially he was part of the anti-US resistance — which was a "duty at that time for everyone" — until he saw that ''targeting US vehicles ended up resulting in civilian deaths." The anti-US resistance shortly thereafter became a part of al-Qaeda in Iraq, he noted.

Bayati, the mayor and other locals spoke about the importance of rebuilding the city's citadel, which was "the pride of the city," as well as repairing the road to Mosul, which was damaged by the fighting.

Meanwhile, the mayor said that officials have gone to camps occupied by internally displaced persons to encourage Tal Afar natives to return to their homes.

Bayati warned, however, that it was "better if IS relatives don't return."

He claimed that there was an agreement with the central government that the "fathers, brothers and sons of IS members cannot return."

"If we let [male relatives] come back," he said angrily, ''they will get instructions from Turkey [implying that IS members are hiding in Turkey] to plant bombs and [other improvised explosive devices], and they will be "threatened if they don't" due to strong family ties.

In the lead-up to its liberation from IS, many analysts warned that Tal Afar could be at significant risk of sectarian violence in the post-war period. For the time being, this does not seem to have ensued.

But it does remain a strategically located city with a checkered past and with less than a quarter of its population back home.