As the predominantly Shiite Popular Mobilization Units (PMU), with the support of Iran, expand their control over the recently liberated area of Tal Afar, which has a Turkmen majority, the tension between the PMU and Turkey has increased. 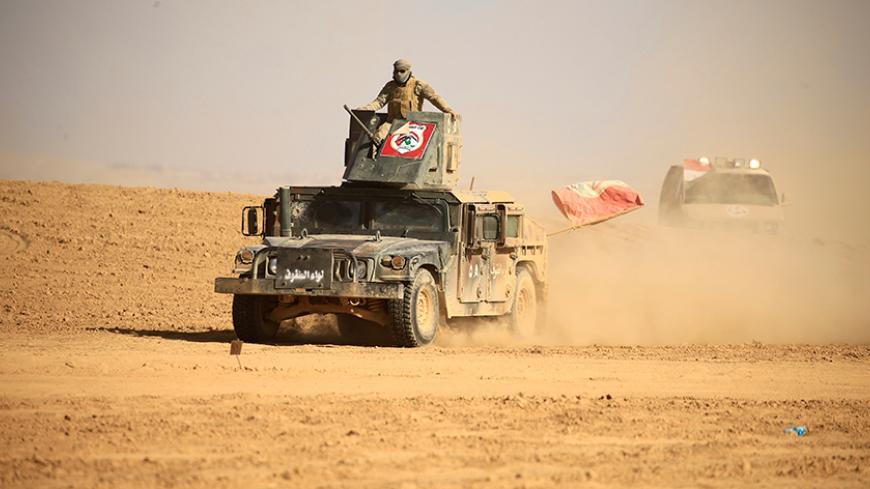 BAGHDAD — “Tal Afar will be the cemetery of Turkish soldiers should Turkey attempt to take part in the battle,” Hadi al-Amiri, the head of the Badr Organization and a leader in the Popular Mobilization Units (PMU), said Nov. 9 in a message to Iraq’s northern neighbor, in the event Turkish troops deployed in the Bashiqa camp attempt to take part in the liberation of Tal Afar.

On Nov. 16, Tal Afar was liberated. It is a strategic area for the PMU, as it gives them access to the Syrian border and enables them to cut off the routes for Islamic State (IS) fighters to escape to Syria. Following the liberation of Tal Afar, Amiri said that the Syrian president has invited the PMU to fight the Syrian opposition inside Syrian territory.

Amiri's statement against Turkey, which is close to Iran, came in response to the earlier statements of Turkish President Recep Tayyip Erdogan in regard to the city of Tal Afar, whereby he warned the PMU not to commit any “violations” against the city’s civilians.

During a press statement Oct. 29, Erdogan said, “The Turkmen city of Tal Afar is a matter of great sensitivity to us. Should the PMU commit terrorist acts in the city, our response will be different.”

Erdogan added that he received information that confirms the PMU terrorist acts in the city, without giving further details on the number of reinforcements or how Turkey’s retaliation will be different.

In the same vein, Iraqi Prime Minister Haider al-Abadi responded to the Turkish president Nov. 1, saying that the Iraqi government is keener than any other party on Tal Afar. Abadi did not hide his concerns about any Turkish threats, stating, “The threat of a Turkish intervention still exists.”

Tal Afar is a district administratively affiliated with Ninevah governorate and located 63 kilometers (39 miles) west of Mosul, close to the Iraqi-Syrian border, with an area of approximately 28 square kilometers (11 square miles).

IS' No. 2 man, Abu Alaa al-Afri, who was Abu Bakr al-Baghdadi's deputy, hails from Tal Afar and was killed in the city in an Iraqi raid last year.

The city of Tal Afar, with its diverse population, has become a controversial battlefield for parties beyond Iraqi borders, which is what confirms its geographic importance — especially for Iran seeking to reach Syria through the Iraqi land channel, and for Turkey seeking to revive the glory of the Ottoman expansion.

The city is home to different ethnicities and has a Shiite Turkmen majority, which is at the base of the Iranian-Turkish conflict (Iran supports the Shiites, while Turkey supports the Turkmens).

It is important to note the Shiite-Sunni conflict among the Turkmen population, which could spark a raging war within the district, making it easier for Iran and Turkey to gain a foothold in the city that might involve military presence.

To add fuel to the fire, there has been talk that the liberation of Tal Afar, which is still under IS control, will be under the supervision of the head of Iran’s Quds Force, Qasem Soleimani. This would be a major provocation for the Sunnis there.

The PMU involvement in Tal Afar is also controversial and is seen as a reaction to the Turkish presence in Bashiqa.

Faleh al-Fayad, the head of the PMU and the national security adviser in Iraq, said, “The PMU’s goal is to liberate the city of Tal Afar and reach the outskirts of Mosul, without entering the city unless by an order from the commander in chief of the armed forces.”

On Oct. 30, the Turkmen Front in the Kurdistan Region parliament warned against any demographic change in the district of Tal Afar as a result of the PMU interference in the battle there, and thus refused the latter’s participation in the liberation of the city.

Harakat Hezbollah al-Nujaba, one of the PMU factions affiliated with the Iranian velayat-e faqih, expects the battle to liberate Tal Afar to be “fierce,” denying claims that the PMU is trying to bring about a demographic change in the district, and accusing Turkey of “sticking its nose in the business of others."

It is very likely that the PMU and the Turkish troops will clash in the city, as the latter are stationed 12 kilometers (7.5 miles) from Tal Afar.

Turkey believes that the presence of the PMU in Tal Afar gives it ground to enter the city, especially after Erdogan’s warning to interfere “should the PMU spread fear among the citizens.”

What’s more, Turkey does not wish for Iran to have influence in Tal Afar, which is adjacent to the border with Syria; it would make it easier for Iran to transfer arms through the land route it is seeking to establish from the east to the west of Iraq. This is also seen as one of the reasons behind the dispute over Tal Afar.

Erdogan fears that Tal Afar, which lies 60 kilometers (37 miles) from the Turkish border, would become a haven for the Shiite factions close to Iraq. The Turkish president also has concerns over a possible alliance between the PMU and the Kurdistan Workers Party (PKK) in regard to attacks that could be launched on Turkey or a possible facilitation by the PMU of arms transfers to the PKK fighting the Turkish army.

It appears that there will be a new Turkish-Iraqi escalation that might evolve into a military standoff, especially since Abadi has previously stated, “[Iraq] does not wish to go to war with Turkey, but should Turkey insist on a war, we will be ready.”

However, should any military confrontation happen between Turkey and Iraq, the latter would not involve its regular troops but rather the PMU that view the Turkish troops in Iraq as an “occupation force,” which they would target if they happen to be in the same location.

Tal Afar has become an international disputed area between Turkey and Iraq, which is causing further instability in terms of security and opens the door to civil conflicts, thereby paving the way for any Iranian or Turkish military intervention.