Predominately Shiite Popular Mobilization Units (PMU) have liberated Tal Afar airport to the west of Mosul and now seek to coordinate with Kurdish peshmerga forces on the front. 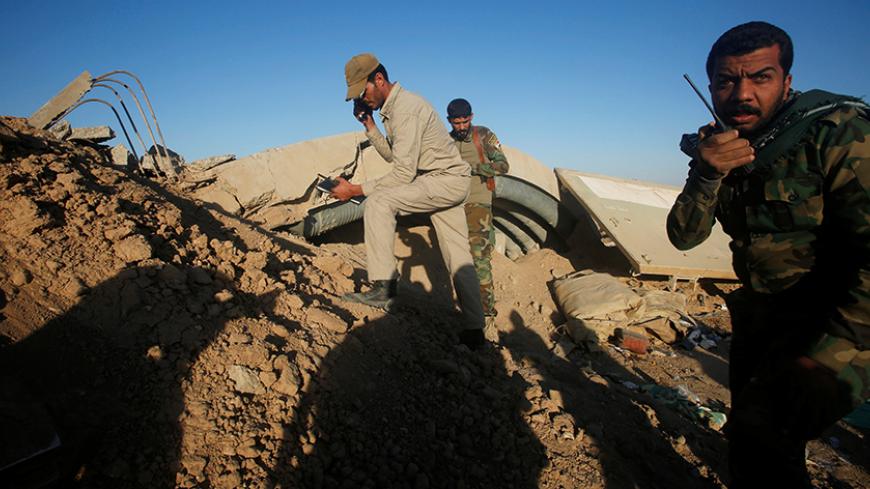 Members of the Shiite Badr Organization take cover behind a berm during a battle with Islamic State militants at the Tal Afar airport, west of Mosul, Iraq, Nov. 20, 2016. - Reuters/Khalid al Mousily

TAL AFAR, Iraq — Damaged aircraft hangars and twisted metal are scattered across Tal Afar airport, to the south of the city, and tunnels have been dug in several locations. Graffiti praising the Islamic State (IS) and posters of martyrs and Shiite religious figures are plastered on the walls of the airport buildings.

On Nov. 16, the mostly Shiite Popular Mobilization Units (PMU) took the destroyed air base from IS and pushed on to seal off Mosul, meeting up with the peshmerga forces on the northern axis on Nov. 23 and agreeing to coordinate with them on that front.

In the areas west and southwest of Mosul, the PMUs are the only active Iraqi force. According to Abu Taha al-Nasseri, the division commander, the battle took six hours and resulted in only three deaths among PMU fighters, despite the vast destruction at the airport.

Nasseri told Al-Monitor during a visit Nov. 20 that 15 enemy fighters had also been killed and that no air support had been provided by the international coalition. Incoming fire from IS-held territory continued while Al-Monitor was there.

In the preceding weeks, Al-Monitor had the chance to visit some of the PMUs near the front lines as they progressed northward.

During an Oct. 31 briefing to a small group of reporters near the front line in Zargah, southwest of Mosul and 342 kilometers (212 miles) northwest of Baghdad, Badr Organization chief Hadi al-Amiri said that he "thanked God" that they had not received any air support from the Americans. "We had enough with the invasion of Iraq [in 2003]."

The Badr Organization was originally founded in 1983 and operated in exile in Iran until the regime of Saddam Hussein was ousted in 2003. During that time, it received funding and training from Iran's Islamic Revolutionary Guard Corps.

Amiri told Al-Monitor that he spoke "in the name of Hashid Shaabi," the Arabic name for the PMU, and not as the leader of his group within it. In response to the question whether they would remain in the area after the military operation ended, he said that the PMU "had not stayed in any area that they had taken."

The PMU continue to maintain a presence in Salahuddin and other areas, but official control of those areas has been handed over to the local authorities.

Amiri added that no Iranian advisers were involved in the operations in the area, despite reports to the contrary, but that he "would not be afraid to say if they were. There are 5,000 Americans here [in Iraq]. We have the right to bring Qasem Soleimani here if we want."

When asked why the word "Badr" had been graffitied on several buildings along the main road running through several of the villages that Al-Monitor passed on the way, he said that he had not seen it but that "they’re young men — it’s normal." He stressed, however, that the Badr Organization had always "tried to discourage them from doing so."

Amiri showed a map with colored lines indicating the various areas the PMU were tasked with in the axis toward Tal Afar, but noted that all of the Shiite paramilitary groups — such as Asaib Ahl al-Haq, Kata'ib Hezbollah, Harakat al-Nujaba — were involved.

He stressed that the peshmerga forces had nothing to do with the operations in "these Arab areas" south of Mosul and Tal Afar, but he said, "We have worked with them before — in Saadiya, Suleiman Beg, Amerli and Tuz Khormato."

Early that evening, young men who told Al-Monitor that they were from Nasiriyah and Basra stood on the rooftop of a building in Zargah, one holding a pair of binoculars. In preparation for the night, they put out piles of blankets and various other necessities. At one point, a plume of smoke rose in the distance from what they said was a vehicle-borne improvised explosive device (VBIED) that they had targeted before it could get to Zargah. When Al-Monitor was leaving, one fighter said they had information that two more car bombs were heading in their direction.

A few weeks later, on the lengthy trip to Tal Afar airport, along a road that had been cut up at regular intervals to prevent VBIEDs, followed by dusty tracks through desert land, some PMU fighters seemed confused about the area they were in.

On Nov. 20, during a stop in the village of Dallawiyah, situated 329 kilometers (204 miles) northwest of Baghdad, to refuel and request permission to proceed toward Tal Afar airport, Al-Monitor asked a small group of fighters who were filming the journalists traveling in a small convoy what the name of the town was. "Yazidiye," one of them said, with three others nearby nodding. "There were Yazidis here."

However, the Yazidi towns are only found much further to the north. The fighters said that they were from Nasiriyah and Basra, both Shiite-majority cities in the south.

Given the current momentum, Mosul and Tal Afar might be retaken relatively soon. And then, presumably and in line with various statements made, the PMU might focus on Syria. Some have been operating alongside Syrian regime troops against opposition fighters for years.

Following a question by a journalist Oct. 31 in Zargah of whether the PMU would cross into Syria to fight IS, Amiri laughed and offered to take her there. He said, "Our mission is to liberate our country, but we will go to Syria if we have to because we believe that Iraq will be threatened by IS as long as it is still present in Syria."

Meanwhile, a controversial law that passed Nov. 26 has officially legalized the PMU as a government entity, providing salaries and pensions to the fighters.

On Nov. 24, a statement was issued accusing US planes of bombing Tal Afar airport shortly after Prime Minister Haidar al-Abadi left it following a meeting with PMU leaders. Col. John Dorrian, the Baghdad-based spokesman for the US-led coalition, said that the incident had been investigated and any coalition involvement had been ruled out.

Any reason for disagreement, however, may spark tensions that were never entirely suppressed.