Anti-IS troops are gaining ground on multiple fronts in Iraq

Strong collaboration is helping various Iraqi forces and the international alliance to advance toward the city of Mosul from all directions in the battle against the Islamic State. 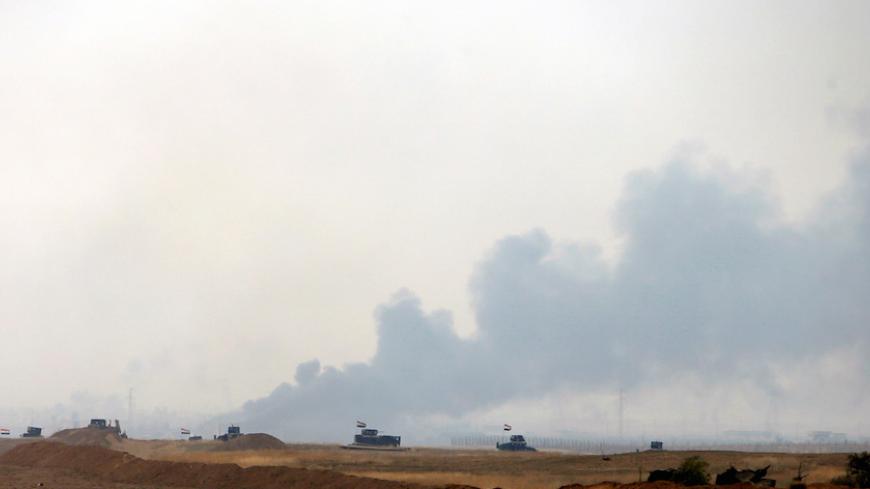 BAGHDAD — Forces are converging from all directions to expel the Islamic State (IS) from the strategic city of Mosul in Iraq. Some troops are within 5 miles of the city, officials report, while others are making their way through many areas of Ninevah province that are still under IS control.

So far, more than 1,000 square kilometers (almost 400 square miles) containing more than 70 villages in Ninevah province have been liberated, and some Iraqi joint forces are on Mosul's outskirts. The joint forces are fighting on more than one axis and advancing from various points around the city.

Southern axis: This axis launched from Qayyarah base, which was recently liberated. The forces participating include the troops of Ninevah Operations Command, federal police forces, SWAT team forces and the 15th Division forces. US artillery stationed at Qayyarah base behind the troops is providing support. This axis aims to liberate the east side of Mosul after controlling al-Shura, Hammam al-Alil and Mosul airport. This axis started from the point farthest from the center of Mosul, 70 kilometers (about 43 miles) away.

Eastern axis: This axis launched from al-Khazar with the advance of peshmerga troops and forces directed by the Iraqi Counter Terrorism Service. The service forces are stationed behind the peshmerga troops, which will move west. The departure point of this axis is about 20 kilometers from Mosul.

Southeastern axis: This is the Kuwayr axis, which includes the peshmerga and the 1st and 9th Divisions of the Iraqi army. These troops must liberate the areas between Hamdania and Nimrud and control them after the nearby Iraqi Counterterrorism Service forces advance. The previous two axes are backed by French artillery in Makhmour in addition to the 9th Armored Division. The Christian brigades expect to play a role in controlling the area once it is reclaimed. Most of the villages and cities of the Ninevah plains belong to Christians.

Northeastern axis: Peshmerga forces participate in this axis, also called the Bashiqa axis. Nearby Camp Zilkan is a base for the Turkish and the National Mobilization forces led by the former governor of Ninevah, Atheel al-Nujaifi, and includes about 3,500 fighters. Turkey insists on having a role in this axis, even though Baghdad opposes its participation in Mosul's liberation. There is disagreement over whether Turkey is actually being allowed to participate at all.

Northern and northwestern axes: The forces participating in these axes are the 16th Division of the Iraqi army and some battalions of the Iraqi Counterterrorism Service forces, in addition to peshmerga troops.

Western axis: This is the biggest axis, stretching from Qayyarah in the south toward Tal Afar in the north and Sinjar and al-Baaj in the west. The Popular Mobilization Units (PMU) stationed at Qayyarah base, in addition to two brigades from the federal police forces, are entrusted to run this axis. Abu Mahdi al-Muhandis, the PMU de facto commander, has said that the western axis is the PMU’s axis and it will take over the territories in Tal Afar, then support forces that are heading to Mosul's center. The Asa'ib Ahl al-Haq movement, which is working as part of the PMU, said it has been given the task of liberating Tal Afar.

PMU spokesperson Ahmed al-Assadi noted Oct. 21 that the PMU’s axis is the most difficult and longest axis and the largest in surface area with more than 10,000 square kilometers — several times bigger than the front where the peshmerga, the Iraqi army, the federal police, the tribal forces and the Iraqi Counterterrorism Service forces combined are fighting.

The PMU is not, however, actually allowed to enter Mosul. Participation of the mostly Shiite PMU has raised concerns about a sectarian conflict. Prime Minister Haider al-Abadi​ had announced Feb. 20 that PMU forces would take part in the battle of Mosul. But in the Oct. 17 statement announcing the launch of the Mosul operations, he noted that the offensive will be exclusively led by the Iraqi army and the federal police, and they alone will enter the mostly Sunni city.

Hadi al-Amiri, leader of the Iran-backed Badr Organization, an Iraqi Shiite political party, said Oct. 16 that while the joint Iraqi forces are tightening the noose on IS forces and heading toward the city of Mosul, only the Iraqi army and federal police will enter.