Iraqi forces are prepping to liberate densely populated western Mosul from the Islamic State, which is expected to put up a fierce fight. 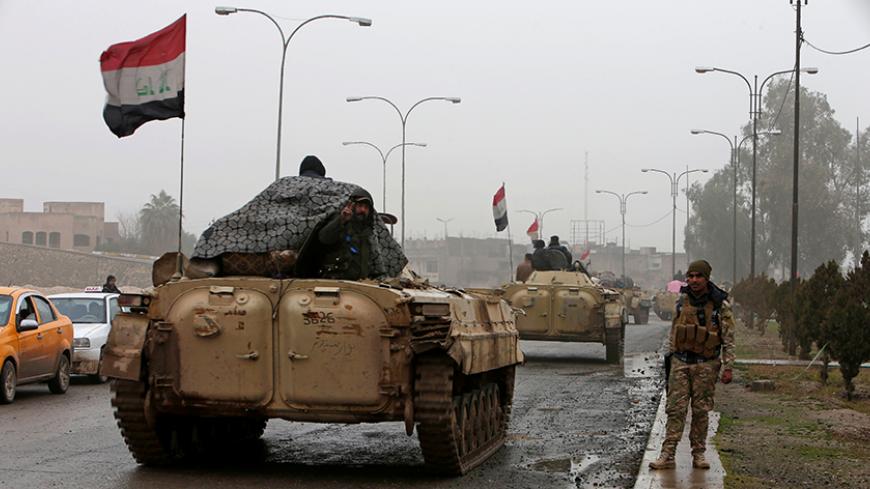 BAGHDAD — The Iraqi air force recently dropped millions of leaflets on western Mosul alerting residents of pending operations to liberate the area from the Islamic State (IS). In late January, Iraqi forces supported by the US-led coalition retook eastern Mosul from the jihadi group. Counterterrorism units and others are currently gearing up to launch ground operations in the western half of the city. The area's dense population, old buildings and natural and architectural barriers will make its liberation challenging. It is also unlikely that IS will withdraw without putting up a fierce fight.

Western Mosul consists of 50 highly populated residential areas whose urban landscape is characterized by alleyways and narrow streets. Lise Grande, UN humanitarian coordinator for Iraq, has expressed deep concern about the fate of the 750,000 people trapped there. IS wants to use them as human shields and, therefore, will not allow them safe passage. Even if some were to manage to make their way toward the front, crossing it would not be easy.

The Tigris River splits Mosul into its eastern and western halves. In the battle for the city's eastern section, international coalition warplanes targeted the bridges across the river. The destruction of the Old Bridge on Dec. 11 severed the last connection between the two sides. Floating bridges will therefore be needed for military crossings, which will be a challenging undertaking at the wider parts of the river. This is the case in the north, whose relative openness makes it a good place for transferring military equipment.

Al-Monitor has learned from a senior military source who requested anonymity that counterterrorism units are preparing to establish three floating bridges on the river. That part of the mission will take place after international coalition airstrikes clear the area.

Federal police and rapid-response forces in southern Mosul are also on alert for the launch of the offensive. A leader of the local police told Al-Monitor, “These forces have to advance toward Mosul International Airport, the Ghazlani camp and the towns of Karama, al-Lazak and Bu Saif, which are still under IS control.” The forces will move from the Hamam al-Alil area to retake the airport and the camp, which will serve as launch pads for operations toward the west.

Ahmed al-Asadi, spokesman for the predominantly Shiite Popular Mobilization Units (PMU), had said on Dec. 25 that the PMU militias will be purging IS cells from the area west of Mosul all the way to Tal Afar and Sinjar. The battle for Tal Afar will be a war of attrition and it will require the extensive mobilization of human and military resources to liberate the district, the largest in Iraq. If the PMU cuts the road linking Mosul to Tel Afar, IS fighters will not be able to easily escape the city, which could translate into fierce fighting in the area.

The Ninevah Guard — consisting of three brigades established by former Ninevah Governor Atheel al-Nujaifi — was originally supposed to take part in the battle on the northern front. On Jan. 30, however, the Joint Special Operations Command announced that the militia would not be fighting because an arrest warrant had been issued against Nujaifi for collaborating with a foreign country, Turkey, from which his forces received training and support in northern Iraq.

The counterterrorism and other forces that took eastern Mosul in exhaustive fighting will have their hands full on the western front. In the battle for the east, IS mustered a tough defense, executing high-tempo attacks with car bombs that did not slow until all the Tigris bridges were destroyed. They also made use of booby-trapped houses, roadside bombs and other ambushes, causing significant military and civilian losses, in addition to shelling with Katyusha rockets and snipers along the front.

IS also introduced unmanned aircraft in the battle, dropping small bombs on the Iraqi forces, a move that took them by surprise. One such attack, on Jan. 16, left an embedded Al-Hurra TV correspondent dead and several soldiers injured. If the battle to take eastern Mosul is any indicator, the fight to liberate the west will likely be ferocious, posing many challenges for Iraqi forces and their allies.