Mapping the road to the liberation of Mosul 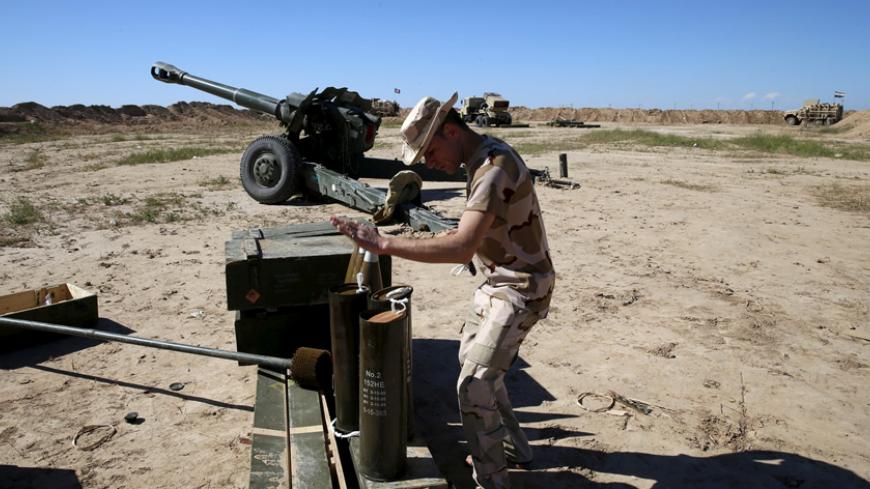 An Iraqi soldier is seen at his base in Makhmur, after it was freed from control of the Islamic State, south of Mosul, April 17, 2016. - REUTERS/Ahmed Jadallah

In recent developments in the Iraqi arena, Prime Minister Haider al-Abadi announced July 9 the liberation of the Qayyarah air base 60 kilometers (37 miles) south of Mosul. But the pertinent question is: How will the Iraqi forces reach Mosul from different directions?

The Joint Military Command had declared March 24 the launch of the first offensive on three axes according to statements by operations command spokesperson Brig. Gen. Yehya Rasul.

“The Iraqi forces have seized control of a number of villages near the Makhmur district to the east of Mosul,” 50 kilometers south of Mosul, Rasul said.

The military forces began advancing from the Makhmur air base toward the towns stretching along the Tigris River, about 16 kilometers west of Makhmur.

During the first days of the offensive, the army troops — including the 15th Division in the Iraqi army, backed by local fighters from Ninevah province — managed to liberate the three towns of Kudila, Kharbadan and Karmadi, before the operations came to a halt for over a month given the fierce resistance by the Islamic State (IS) and a string of suicide bombers hitting the military units.

It was announced April 27 that the town of Mhana was liberated, and the town of Kabruk was liberated on May 9. Similarly, in the beginning of June the troops were successful in fully liberating the strategic town of al-Nasr, overlooking the entire area adjoining it and the Kharaeb Jabr village that is adjacent to the seven Hajj al-Ali villages. By July 3, all said villages and towns were indeed completely liberated.

With this, the Iraqi forces now control the entire right side of the Tigris River, awaiting orders to cross the river toward the Qayyarah district.

In parallel, at the height of the battle of Fallujah June 18, the Iraqi government announced in a surprise move the launch of a new offensive on a new axis to liberate Mosul.

The axis stretches from Baiji through the Mosul-Baghdad road all the way to Qayyarah, Hammam al-Alil and Mosul.

The operations were launched from the chemical fertilizer plant, 20 kilometers from the city center of Baiji, with participation of the Iraqi counterterrorism service, the 9th Armored Division, troops of the Salahuddin Operations Command and the Ninevah Operations Command, the tribal mobilization troops as well as the Engineer Battalion.

During the first hours of the offensive, the military units managed to liberate small villages on the way before they were halted at the border of the Mohammed Moussa village because of bad weather, the heavy ambushes and the fact that the liberation plan had been leaked, as was revealed later on by Abadi during a press conference with a number of journalists June 29. “We changed the plan following leaks and statements by [parliament members] that put our troops to risk,” Abadi said. “Mosul will be liberated during this year as promised.”

After a three-day hiatus, the operations resumed June 21 with the aim of liberating al-Shirqat district on the northern border of Salahuddin and Ninevah governorates.

On the first day of resuming operations, the towns of Qaryat al Misḩak, Mohammed Moussa, Sheikh Ali and some small towns scattered all the way up to the Zawya intersections were also liberated. The next day, military units reached Ain al-Debs area. On June 24, Iraqi troops liberated the Makhoul center and Zawya intersection, which was an important milestone in the operations. With this, the Iraqi forces have been able to cover more than 22 kilometers from their starting point.

The next day, military units crossed the three complexes of Shamar and liberated the entrance of al-Shirqat, which is another strategic point. However, the forces did not head toward al-Shirqat, but rather marched on to the north toward Telol al-Baj, waiting for the support of the counterterrorism forces that were participating in the Fallujah battles after completing their mission there. Telol al-Baj was liberated June 29. The troops continued advancing toward the administrative borders of Ninevah governorate, about 20 kilometers from Telol al-Baj, further crossing 10 kilometers into the governorate.

Military units resumed operations June 9, crossing the al-Hadr intersection toward the Qayyarah air base. The counterterrorism service, the 9th Armored Division in the Iraqi army and tribal mobilization managed to enter the air base from the Ramadniyat town to the west, which was also liberated along with other adjacent towns, namely the town of Soran.

With these developments, supplies to the areas of al-Shirqat, Hawija, the Great Zab and the rest of the areas south of Qayyarah have been completely cut out; the next step would be liberation.

The Qayyarah air base will be the key to moving toward Hawija, al-Shirqat and Mosul, just as the Speicher base was the key to Tikrit and the bases of Tariq and al-Mazraa to Fallujah. The air base lies at 12 kilometers from Qayyarah and 65 kilometers from the center of Mosul. It has an area of 24 kilometers and includes two runways of 3,500 meters each, in addition to aircraft caches, military infrastructure, sniper and protection towers, and a large camp.

The military units stationed south of Qayyarah district are expected to cross the river toward the district to liberate it, where they will join the troops that already entered the Qayyarah camp. Thus, Mosul has become surrounded from the north and east by peshmerga forces, from the west by peshmerga and some Yazidi forces, and from the south in the Qayyarah base.