Iraqi forces are currently battling the Islamic State on the western side of the Tigris River with the aim of liberating Qayyarah after having taken the air base there in their march to Mosul. 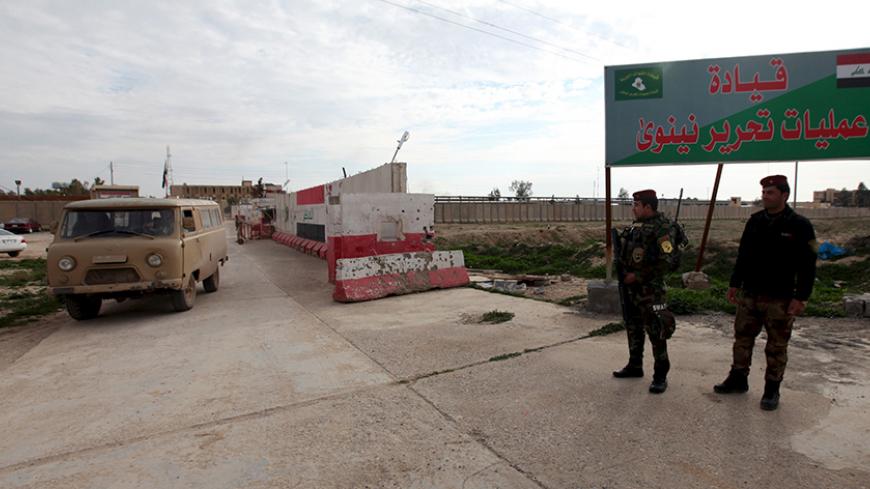 Iraqi army members stand guard at the entrance to the Ninevah Liberation Operations Command at Makhmour base, south of Mosul, Feb. 14, 2016. - REUTERS/Azad Lashkari

ERBIL, Iraq — Almost four months into the launch of the Ninevah Liberation Operation, Iraqi forces managed to secure a major gain July 9 by capturing the strategic Qayyarah air base in the southern countryside of Ninevah province. The victory is expected to invigorate the Iraqi offensive in this key northern province, the location of Mosul, the largest city controlled by the Islamic State (IS).

The Ninevah offensive, which began in late March, has been largely characterized by slow progress and has at times appeared stalled, such as when the Iraqi forces struggled to capture al-Nasr, a village near Makhmur, during the first couple of months of the operation. The victory in Qayyarah will bring strategic benefit to the several layers of the Iraqi security forces and their local Sunni tribal allies by helping facilitate the delivery of military and logistical supplies via the air base.

“It is an important, strategic air base, and we will use it in the future as a major base for operations in the area,” Gen. Firas Bashar, the head of media relations at the Ninevah Operations Command, told Al-Monitor. “This was also a major base used by IS for recruiting and training purposes and a launch site for operations.”

By controlling the air base and the surrounding area, the Iraqis are now also in control of the road linking Mosul to the IS-held territories of Shirqat and Hawija, in Salahuddin and Kirkuk provinces, respectively. The Qayyarah facility, previously called Saddam Air Base, was captured by Iraqi forces led by the elite counterterrorism and army units approaching from the direction of Salahuddin province, to the south, Bashar said.

Michael Knights, a fellow at the Washington Institute for Near East Policy specializing in Iraqi military and security affairs, told Al-Monitor that Qayyarah will give the US-led coalition a base that “can easily be fortified and developed to hold US artillery and most importantly helicopters.”

“Qayyarah is close enough to Mosul to ensure that the United States can have advisers in the forward headquarters executing the Mosul battle and also for US artillery and helicopters to provide direct support to the battle,” said Knights. “Qayyarah now has a secure line of supply across the Tigris to Erbil airport, so it can serve as a supply base too.”

Although many have raised doubts about the ability of the Iraqi security forces to undertake the challenging task of expelling IS from Mosul, Knights spoke of the Iraqi military's “powerful recovery” with its victories in Ramadi, Fallujah and Tikrit “without much involvement” by the Shiite paramilitary units, which are largely backed by neighboring Iran.

The Iraqi forces have now managed to cross the Tigris River in the area between the towns of Makhmur and Qayyarah, in southern Ninevah, and are currently battling the extremist organization on the western side of the river with the aim of liberating the town of Qayyarah after having seized the air base.

“After capturing the Qayyarah air base and other areas, we are certainly in a far stronger and better position now than we were in the past,” Bashar said. “IS fighters have been experiencing a major loss of morale, and our force's fighting capabilities are much better than theirs.”

The importance of this area in the Ninevah countryside in no way compares to the city of Mosul, the place where IS declared the establishment of a caliphate in late June 2014. Iraqi forces are likely to experience a far tougher battle for Mosul, Iraq's second-largest urban area, with more than 1 million residents remaining there, and IS' prized possession in the country. The jihadist organization is said to already be preparing for a final showdown with Iraqi forces, planting bombs and digging trenches around the city.

Another important issue is gaining the trust of the local population in Ninevah. When IS and a number of other Sunni insurgent groups took control of Mosul in June 2014, they were largely welcomed by residents who were fed up with the daily discrimination they were experiencing at the hands of the Iraqi security forces under then-Prime Minister Nouri al-Maliki's government.

Aware of the past tensions between the province's civilian population and the security forces, Iraqi officials are trying hard to win the hearts and minds of Mosul's population ahead of an eventual charge toward the Sunni Arab-dominated city.

“Your army has come to liberate you from the filth … of IS, and you will only see respect, appreciation and good treatment from [the Iraqi army],” Defense Minister Khaled al-Obeidi told Mosul's residents in a reassuring audio message released July 13. “And do not pay attention to the rumors spread by the hateful and the grudging. … The goal is liberating you and protecting your lives and properties.”