Ninevah sheikh and ex-commander warn of ‘IS family camp dangers’

Nearly two years after its liberation from the Islamic State, Ninevah province is still struggling to deal with IS-linked displaced people. 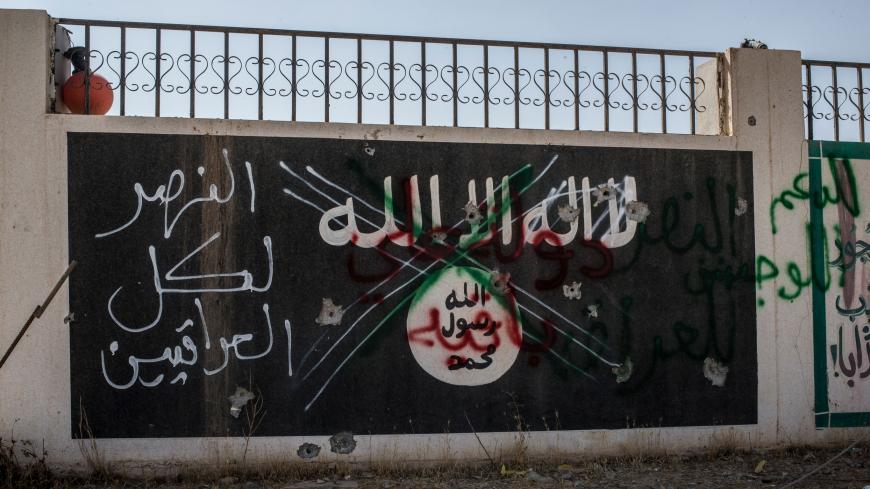 ERBIL, Iraqi Kurdistan — As Iraqi internally displaced persons get sent from camps in Ninevah province to their home areas despite concerns for their safety, the province’s residents are worried about a looming influx of Iraqis currently living in Syria who have ties to members of the Islamic State (IS).

“We need time to recover,” Gen. Najm al-Jabouri, the former Ninevah operations commander, told Al-Monitor in an interview in late August, saying it is “a very bad idea” to move the Iraqis from Syria's al-Hol camp into Ninevah.

Human Rights Watch reported Sept. 4 that local authorities in Ninevah have forcibly expelled more than 2,000 Iraqis linked to IS from camps for displaced people in the province since Aug. 23.

Reports surfaced in late July that there were plans to isolate and fence in families coming from al-Hol at the Jadah 5 camp near the town of Qayyarah in southern Ninevah.

An earlier Human Rights Watch statement warned that “segregating families, mainly women, and children coming from Syria is a step toward stigmatizing and labeling them in the absence of any credible allegation that they have committed a crime.”

Local tribal and military leaders, however, say they are adamantly against having such displaced Iraqis moved to the area at all. Human Rights Watch said in July that there were about 30,000 Iraqis in al-Hol.

Jabouri told Al-Monitor that the Iraqis in al-Hol “are very bad people. The majority of them are families of leaders of IS. If they move to the camps in this area, they will create problems.”

The high-ranking officer is seen by many in the country as a hero after commanding forces in the battle for Mosul. He recently stepped down as Ninevah operations commander.

He is concerned that changes of this sort could jeopardize the gains of recent years in Qayyarah, which many say faces a delicate situation.

“We won over the people in Mosul and the people outside Mosul. Now people do not give any safe haven to terrorists, to IS. Before 2014, the relationship between the people and the security forces and the army was very bad,” said the officer, who was previously mayor of Tal Afar and spent years in the United States but whose family is from Qayyarah.

“But Mosul is a big area and we have many thousands of villages. IS still keeps some fighters and some people working with it. Because of that, some attacks happen” at times, he said.

“My idea is that we should take them (displaced persons with links to IS) to the south or west. The desert. Samawah, maybe,” he said.

Samawah is the capital of the sparsely populated southwestern province of Muthanna.

“We should put them far away from Mosul, Salahuddin, even Anbar. Because we have a lot of refugees here already” and “the refugees here have suffered a lot and if we put these bad people with them … this is not a good idea,” Jabouri said.

Qayyarah was retaken from IS in late August 2016, but its oil wells were set on fire by the terrorist group and continued to burn for months.

Islands in the Tigris river are still often used by terrorist groups to hide on the border between southern Ninevah and northern Salahuddin provinces, Jabouri said.

Security breaches in areas disputed between the central government and Kurdistan Regional Government have also been problematic in recent months.

Violent incidents have been reported in camps for the displaced in both Iraq and Syria, including a Sept. 1 beheading of a man from Shirqat in northern Salahuddin by a 15-year-old displaced person in the Debaga camp in territory under the auspices of the KRG .

Some members from the Jabouri tribe in Salahuddin, including Um Qusay, a widow who sheltered Shiites from IS, have told this correspondent in previous reporting trips as far back as 2016 that all families and children of IS should be “eliminated.”

Sheikh Abdulrazzaq al-Wagaa, a prominent leader of the Jabouri tribe — one of the two largest in Iraq and to which most Qayyarah inhabitants belong — began speaking out against moving displaced people from al-Hol to Qayyarah since the possibility was first mentioned.

The sheikh is a former army officer. Photos of him meeting dignitaries, kings and military leaders line the walls of his Erbil home, where Al-Monitor interviewed him.

The sheikh said that the tribal system had been weakened by the Iraqi state and that it would now be impossible for tribal leaders to have the sort of influence that would enable them to affect the situation much.

“Tribes are like a military system, in that they have a hierarchy," he told Al-Monitor. “But now there are many fake sheikhs. This was the fault of the Iraqi state.”

He added that the security situation in Iraq is still very precarious, in part because the “strongest armed force is now the Popular Mobilization Units.”

The sheikh said any camps should be at least 10 kilometers (6 miles) away from any city. He said that while displaced persons not connected with IS should be allowed to go home, the wives and children of IS members should be placed in camps that are not close to inhabited areas, since the presence of such facilities “leads to drug use, corruption, bribes and a lack of security.”

Corruption and abuse of displaced persons in Iraqi camps have previously been reported, including by The Washington Post in May.

In one camp in Salahuddin province visited by Al-Monitor in 2017, a woman who had fled her home in Hawija when it was under IS said that her son had been accused of IS affiliation after she refused to provide sexual favors to a camp guard. She then went to a camp near Tikrit for “IS families,” where local nongovernmental organization staff said she had felt forced to engage in transactional sex to provide for her younger children.

The multiple difficulties such people are dealing with can breed hostility both among the displaced persons and the surrounding population. All those in the al-Hol camp have been exposed to violence and dire hardship for a lengthy period, even if they were against the IS ideology.

The sheikh and the military commander both said moving thousands of displaced Iraqi families to camps in Ninevah are likely to bring greater tensions and corruption and would pose a danger to the fragile but recovering province.