The SDF has transferred another group of IS suspects with Iraqi nationality but arrested in Syria, alongside some of the thousands of Iraqis in al-Hol camp, to Iraq as the potential for jailbreaks remains high. 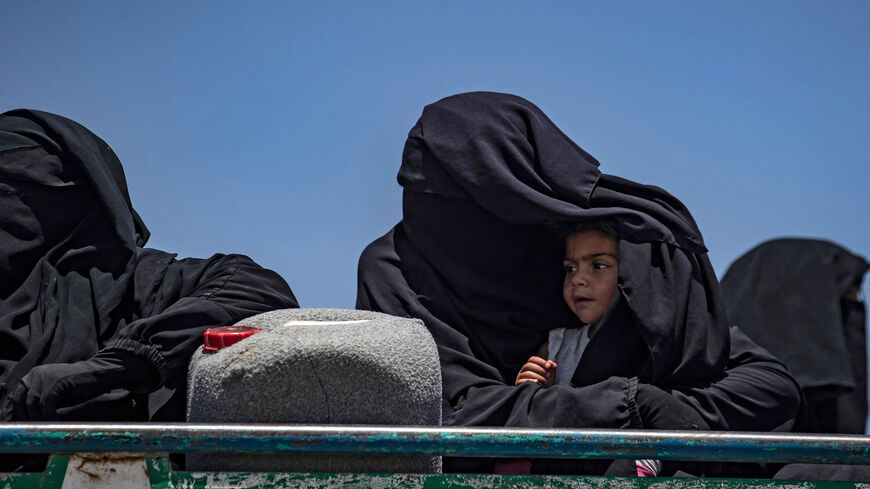 BAGHDAD — Fifty Iraqi men suspected of belonging to the Islamic State (IS) and who had been captured in northeastern Syria were handed over to the Iraqi authorities Jan. 8 at the country’s northwestern border crossing of Rabia.

As the US-backed, Kurdish-led Syrian Democratic Forces (SDF) continue growing closer to the government in Damascus, and concerns fester about the potential for jailbreaks from prison facilities housing thousands of Iraqis as well as Syrians and others accused of involvement in IS in northeastern Syria, efforts seem to be underway to bring back more individuals across the border.

On Nov. 8, a major planned attack on the notorious Sinaa prison in the Ghweiran neighborhood in the western part of the city of Hasakah was thwarted.

The SDF announced Dec. 25 that they had arrested the man they held to have been responsible for the plan to attack the prison, calling him an "emir" ("leader"), but without giving information on the place and date of the arrest.

Local sources concurred that he had been involved in the jailbreak operation, but said he was not an emir and instead answered to others from Raqqa. They claimed he had been arrested in an area of the Deir al-Zor desert near Abu Khashab.

One local Arab source in the area with relatives linked to IS claimed in early January that the current IS "emir" for the Hasakah area was a man in his 50s from the Mashhada tribe and originally from a village near the town of Markada in the southern part of Hasakah province.

A US Department of Defense Office of Inspector General report issued Nov. 4 notably warned, "[The SDF] independently conducted only human intelligence gathering, relying on the Coalition for other intelligence capabilities. The SDF, with Coalition support, continued [to] improve security at detention facilities holding ISIS fighters, but CJTF-OIR reported that conditions remained substandard, adding to the threat of breakouts."

Iraqi security and counterterrorism analyst Fadhil Abu Ragheef told Al-Monitor in a Jan. 15 message that the men handed over to the Iraqi security forces Jan. 8 suspected of being part of IS had been transferred to Mosul and that after an initial investigation they would be transferred to central courts.

According to the government-linked Iraqi Security Cell, the handover had been coordinated by the Joint Operations Command and “the Syrian side of the border.”

Requests made for further information on intelligence sharing between the SDF and the Iraqi security forces to both Iraqi officials and the international coalition had not been answered by the time of publication.

The Bas News website, which focuses on Kurdish areas, reported Nov. 9 that the international coalition had transferred 15 IS leaders to a base it has a presence in Shaddadi, in Hasakah province but south of the city, and that “the transfer process comes as a prelude to transferring the insurgents to Iraq,” which could imply that the coalition acts as an intermediary between SDF intelligence officials and their Iraqi counterparts.

The media outlet cited unnamed sources as saying, “The CIA interrogated the detained IS leaders inside Sinaa prison in Hasakah before they were transferred to Shaddadi base.”

A previous batch of about 100 alleged IS fighters had been handed over to the Iraqi security forces in early December, and prior to that in February and September 2021.

Alongside the alleged IS fighters handed over Jan. 8 were also 403 Iraqi nationals that had been in the sprawling al-Hol camp in northeastern Syria. The camp hosts mostly families believed to be linked to IS.

A total of around 2,150 Iraqis have reportedly been repatriated thus far, while over 19,000 of the almost 60,000 people still living in the camp are thought to be of Iraqi nationality.

A study published in November found that of the 78 people known to have been killed in the camp that year, 58 were Iraqis and at least 10 were beheaded.

On Jan. 8, Iraqi media reported that the Jadaa internally displaced persons camp in Ninevah province would later in the week be receiving a group of 125 Iraqi families transferred from al-Hol camp.

Some noted that hundreds of relatives of suspected IS members had been transferred to Jadaa camp since May, and that this had sparked a negative reaction from the population living in the area.

The idea to transfer Iraqi "IS families" to this camp had been proposed years ago, but it was only in 2021 that it was implemented.

In an August 2019 interview with this journalist, current Ninevah provincial Gov. Najm al-Jabouri had commented on the proposal by saying, “We should put them far away from Mosul, Salahuddin even Anbar. Because we have a lot of refugees here already. The refugees here have suffered a lot and if we put these bad people with them … this is not a good idea.”

Jabouri served as Ninevah operations commander in 2016-17, during battles against IS that retook Mosul.

Meanwhile, jihadist fighters have in recent months reportedly been making their way from Syria’s northwestern province of Idlib to Iraq via SDF territory.

One longstanding Syrian source of this journalist said that the fighters were now based in the Hamrin Mountains and some areas of Iraq’s Diyala region near the Iranian border. Diyala has seen numerous IS attacks in recent months.

Iraq remained the top country in the world in terms of number of attacks conducted by IS’ various regional branches last year with a total of 1,127 self-reported attacks compared with 415 in Nigeria, which came in second.