A massive attack on detention facilities in northeastern Syria under US-backed, Kurdish-led forces has ended after almost a week of fighting, though the fate of some hostages remains unclear. 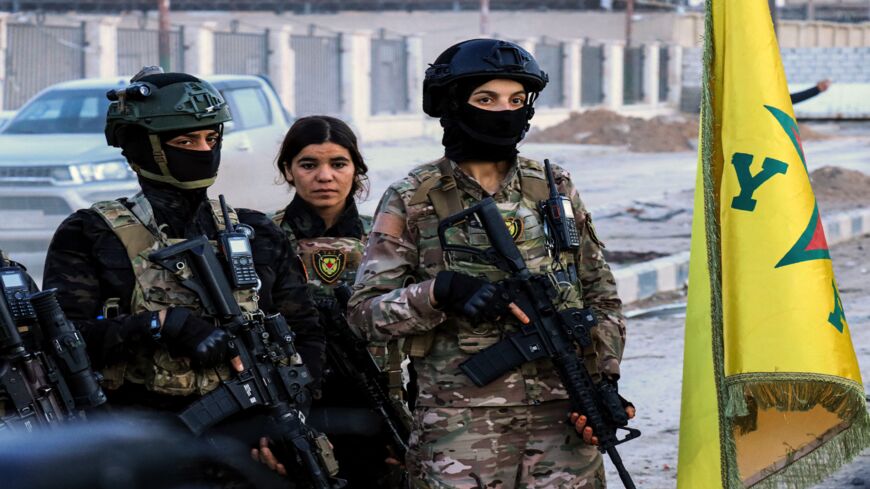 Female members of the Syrian Democratic Forces deploy outside Ghwayran prison in Syria's northeastern city of Hasakah on Jan. 26, 2022, following its takeover by and defeat of Islamic State group forces. - AFP via Getty Images

BAGHDAD — The “F-16s, tanks and guns” that had resounded for almost a week near the Sinaa prison in Hasakah fell silent after 4 p.m. on Wednesday, a resident of the Gweiran neighborhood told Al-Monitor from the city.

“Thanks to God, it is over,” he said from the Arab district of the mixed Kurdish and Arab city, one of Syria’s 10 largest, in the northeastern part of the country not far from the Iraqi border.

Following the most significant attack by the Islamic State (IS) in Iraq and Syria since their territorial defeat in the region was announced in early 2019, the Kurdish-led, international coalition-backed Syrian Democratic Forces (SDF) announced that all of those left inside the now heavily damaged prison had surrendered.

An SDF spokesman later said that two groups of attackers numbering around 200 had been involved in the attack. This journalist was sent a video by a longstanding Arab source shortly after the attack began of IS fighters yelling “God is greater” and firing machine guns, allegedly from inside the prison walls.

In Iraq, Prime Minister Mustafa al-Kadhimi had immediately stepped up border control measures in neighboring Ninevah province. On Wednesday, he went with other high-level security officials to personally inspect the border.

SDF officials have given widely varying numbers of how many detainees had been in the prison at the time of the attack: anywhere between 3,000 and 5,000. Requests from Al-Monitor for an explanation of this enormous difference went unanswered.

The coalition had said in February 2021 that the prison housed roughly 5,000 prisoners.

It is clear that many escaped. What is not clear is whether dozens, hundreds or thousands did. Hundreds were killed in the attack including detainees, SDF and civilians, but no exact figures had been released by the time of publication.

Over a thousand reportedly surrendered; that leaves, however, potentially thousands unaccounted for.

SDF officials had initially tried to downplay the severity of the attacks and had multiple times in previous days announced that it was “over.”

On Wednesday evening, local inhabitants confirmed that the sound of fighting had stopped. And the coalition, which had been active in the fight both from the air and the ground, released a statement that seemed to imply the same. Some of these children are said to have been killed in the recent fighting.

Iraq had announced the defeat of the international terrorist group in the country in December 2017. Across the border, the end of the Battle of the Baghouz in March 2019 marked the end of the group’s control of territory in Syria.

Many of those in the Sinaa prison had surrendered to the SDF in the Baghouz in 2019, including many Iraqi nationals.

The fact that between several hundred minors — many of whom seem not suspected of crimes — had been held in the same prison with battle-hardened IS fighters had garnered greater attention after a previous plan to attack the prison had been “thwarted” in early November.

According to reporting published in December by The Telegraph, “At the al-Hol camp, there are an estimated 27,000 children. When boys there reach puberty, authorities forcibly separate them from their mothers and take them to prisons … boys were removed from the camp to prevent pregnancies."

A Jan. 25 UNICEF statement noted, “Almost 850 children, some as young as 12 years old, are currently in detention in northeast Syria; most of them are held” in the prison that was attacked.

“The majority of these children are Syrian and Iraqi boys, while the rest are of 20 other nationalities. None of them has been charged with any crime under national or international law,” the UN body added. “These children should never have been held in military detention in the first place. The violence they are subjected to may amount to war crimes.”

Some of these children are said to have been killed in the recent fighting.

On multiple reporting trips to both Hasakah and the Arab-majority Deir al-Zor province south of Hasakah province in 2019 and 2020, the eastern part of which is under SDF control, this journalist was repeatedly told of arbitrary arrests of Arabs and other discriminatory practices by the Kurdish-led forces toward Arabs.

Many Arabs had joined the SDF for the sake of a salary in an area with extremely high unemployment and suffering after years of war. Several Al-Monitor spoke to on trips to Deir al-Zor said that they were extremely wary of the SDF leadership and cited abuses. They also claimed that a number of former IS leaders had been released by the SDF and had begun working with them.

A lack of independent media access has severely hindered reporting from SDF-held areas for several years.

One man in the Gweiran neighborhood, which this journalist last visited in December 2020, said that a family he knew had had their home destroyed entirely by tanks.

There have been reports of homes destroyed and civilians caught in the crossfire in the Gweiran and al-Zuhour neighborhoods during the fighting that ended on Wednesday.

The man in the Gweiran neighborhood said he was far enough away that he and his family had simply remained inside for the six days and made do with some food they had kept in case of emergencies.

SDF-linked media reported that many of its fighters had finally left the prison after several days with no food or water, either. Dozens of SDF fighters were killed in the battle.

People were cautiously going back into the streets on Wednesday evening, sources said.

This journalist had reported only days before the Jan. 21 attack about concerns linked to the Sinaa prison.

The SDF announced Dec. 25 that they had arrested the man they held to have been responsible for the November plan to attack the prison, calling him an "emir" (leader). Local sources concurred that he had been involved in planning the jailbreak operation but said he was not an emir and instead answered to others from Raqqa.

A local source contacted by this journalist said late Wednesday that “some of the fighters” who had fled the jail in recent days have “arrived in Raqqa and taken control of areas that Syrian government forces have left."

He claimed that “at least four areas are now controlled by IS in Raqqa” without explaining how big these areas are or providing additional information.

Syrian sources had warned in recent weeks that the IS cells that had been prepped for the planned attack in November were still in the city and local security forces were aware of their presence, but they were presumably waiting to gather more information before taking action. It is unclear why they seem not to have done so.

A statement with comments from international coalition commander Maj. Gen. John W. Brennan Jr. sent to Al-Monitor on the evening of Jan. 26 praised the “bravery and determination” shown by the SDF but also noted that “this is a global problem that requires many nations to come together to develop an enduring long-term solution. The makeshift prisons throughout Syria are a breeding ground for Daesh’s (IS's) failed ideology. We must thoroughly investigate the circumstances that allowed this attack to happen. While there is still much work to be done in Hasakah, we remain committed to advising, assisting and enabling our partners in Iraq and northeast Syria.”