‘Cubs of Caliphate’ are among 700 boys held in Islamic State prison, as Syrian Kurdish forces keep up the battle to retake control 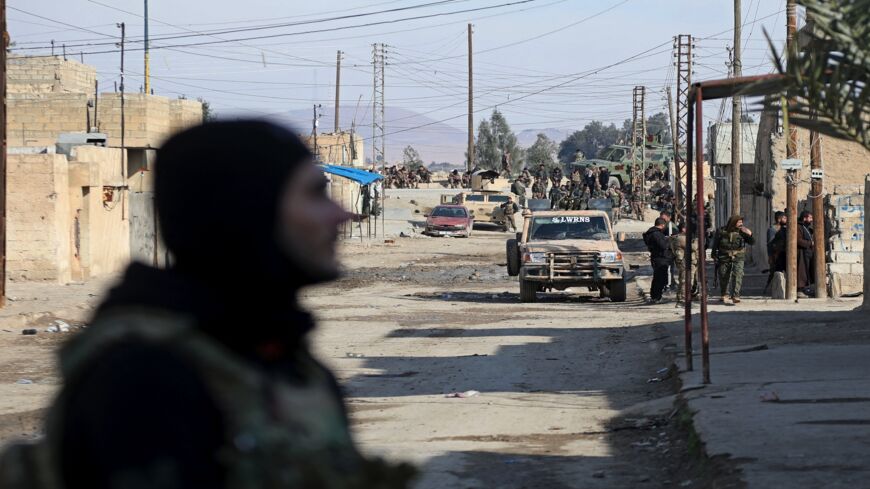 Kurdish security forces deploy in Syria's northern city of Hasakah on Jan. 22, 2022, amid ongoing fighting for a third day with the Islamic State. - AFP via Getty Images

Kurdish-led forces in northeast Syria battled for a fifth day to regain full control of the country’s largest prison for Islamic State (IS) detainees, as coalition aircraft bombed jihadi targets in support of the effort to contain the deadliest violence since the territorial defeat of their so-called “caliphate” in 2019.

A spokesperson for the Syrian Democratic Forces (SDF) said the US-backed multiethnic army had gained control of one of the buildings in the overcrowded complex, which holds around 4,000 IS suspects, most of them foreign fighters. Some 300 of them had surrendered, the SDF said. But the group reportedly retained control of the north wing of the prison. It is now confirmed that American and British special forces are taking part in the operation to retake the prison, the Rojava Information Center, an independent research organization documenting economic and security developments in northeast Syria, said citing sources on the ground.

On Monday, coalition officials confirmed they were offering support both from the air and on the ground.

Around 700 boys being held at the facility were being used as human shields by the jihadis, according to SDF forces. The UK-based charity Save the Children said today it had audio testimony suggesting that “there have already been multiple child deaths and casualties.” The charity noted in a statement, “This included one boy pleading for help. The SDF stated that the children were being used as human shields and said yesterday that the responsibility for the children’s lives lays solely with the fighters inside the prison.” The charity added that it could not independently confirm the claims.

Most of the boys, known as the “cubs of the caliphate,” are thought to have been captured following the fall of Baghouz, the jihadis last patch of territory that fell in March 2019.

Letta Tayler, associate director and counterterrorism lead at Human Rights Watch, asserted in a series of tweets that “some of these boys are [IS] suspects while many are [IS] suspects’ family members. These boys have not seen a judge or been charged with a crime. Most never chose to live under [IS].”

Over 170 people, mostly jihadis, have been killed and thousands of civilians displaced by the fighting since hundreds of the group’s suspected members broke out of al-Sina’a prison Jan 20. They fled after two vehicles packed with explosives were detonated by suspected IS militants outside the building. The SDF said it had lost 27 of its own fighters in the clashes.

The violence spread to the nearby Ghweiran and al-Zuhour neighborhoods, as IS fighters stormed civilian houses and killed at least five civilians on the first night of the attack, according to the Rojava Information Center. It said one of the civilians had been beheaded, a signature atrocity during four years of IS rule over large swathes of Syria and neighboring Iraq.

The World Health Organization said at least 5,500 families had been uprooted from their homes as a result of the bloody events.

The chaos at the detention facility was waiting to happen, with a near-identical plot to free IS prisoners foiled in November. Al-Hol camp, housing some 10,000 women and children from IS, has also been the scene of lethal attacks against security personnel and fellow prisoners.

The Kurdish-led autonomous administration has complained bitterly over the refusal of foreign governments, notably European ones, to repatriate nationals who joined IS. The US-led coalition has provided millions of dollars in funding over the years to help improve security at the detention facilities and train local forces overseeing them.

The jihadis have been regrouping in SDF-controlled areas for some time, mainly in Arab majority Deir ez Zor, where they force locals to share the proceeds of oil produced at makeshift refineries, steal sheep and have been building a network of collaborators to facilitate their illicit activities. They have also been escalating attacks inside Iraq, killing 11 Iraqi soldiers in a Jan. 21 attack.

The Rojava Information Center documented 14 attacks claimed by IS in November alone.

The collapse of the Syrian economy and the country’s worst drought in 70 years has created a fertile breeding ground for IS, though they are nowhere close to regaining their former strength. US military officials contend that the threat is “containable.”

"The coalition is confident in its assessment that the recent [IS] escape attempt will not pose a significant threat to Iraq or the region," the Combined Joint Task Force of Operation Inherent Resolve, the US-led international coalition combatting IS, said in a Jan. 23 statement.

The past days’ tumult might have called such confident assertions into question. However, with all eyes trained on Russian military threats against Ukraine, there is very little chance that the United States will increase present troop levels in the northeast from an estimated 900 special operation forces deployed there, diplomatic sources say. The most immediate result will rather be further funding to harden security at the detention centers.

Aaron Stein, director of research at the Foreign Policy Research Institute and author of “The US War Against ISIS,” told Al-Monitor, “The challenge with the prisons from the get go is that the US wasn’t legally allowed to build specialized facilities [in northeast Syria]. So you had the SDF converting schools with small amounts of aid and quiet assistance from the [US] Task Force with basic security gear and biometrics.” Stein continued, “Then you had overcrowding because of how many IS folks there were left after the war.”

“It’s not a great situation, and efforts to offload foreigners — the majority of which are not European — remain a challenge,” Stein said.

The bloody revolt will have reminded some increasingly anti-American voices within the autonomous administration of their vulnerability and the value of protection provided by US forces. The United States says the mission of its forces is to degrade IS and prevent its resurgence. But the US presence is also a bulwark against the regime of Syrian President Bashar al-Assad and Turkey and its Sunni rebel proxies, all of whom are unremittingly hostile to the Kurds.

There is speculation that the administration’s decision to remove protestors encamped near a bridge linking its territory to Kurdish-controlled northern Iraq may have been accelerated if not actually prompted by the unrest. The crossing had been sealed since Dec. 15 by the Kurdistan Regional Government of Iraq in response to the violent clashes that erupted between youths demonstrating in solidarity with the protestors. The SDF had as recently as Jan. 7 refused to act on the KRG’s demands.

As Al-Monitor first reported, KRG Prime Minister Masrour Barzani decided last week to allow aid deliveries over the bridge twice a month following sustained pressure from the United States. The KRG said, however, that it would not allow the resumption of commercial and human traffic until the protestors, who were calling for the return of the bodies of Syrian Kurdish fighters killed in ongoing military operations by Turkey, left.

The tents sheltering the protestors were removed by the local authorities over the weekend, and KRG officials confirmed to Al-Monitor that the crossing would gradually reopen to all traffic starting Jan. 24.

The standoff was seen as a test for Mazlum Kobane, commander in chief of the SDF. Kobane has been accused by KRG officials of failing to assert his authority over the Kurdistan Workers Party (PKK), which has been waging an armed insurgency against the Turkish state since 1984. PKK commanders played a key role in assisting the US-led coalition in the battle against IS, and PKK cadres remain influential in the Syrian Kurdish enclave.

The youth group that clashed with KRG forces on the border is closely linked to the PKK and involved in its indoctrination and recruitment activities.

Kobane and many key members of the autonomous administration used to be active members of the group. Turkey has touted this as an excuse to launch multiple incursions against the Syrian Kurds, most recently in October 2019. Turkey has recently been spreading rumors of a growing rift between Kobane and pro-PKK hawks within the administration, part of a calculated push to sow the kinds of division it claims already exist.

Aliza Marcus, one of the leading Western experts on the PKK and author of “Blood and Belief, The PKK and the Kurdish Fight for Independence,” discounted the notion that the PKK had decided to remove the protestors because of the violence in Hasakah. “The tent protest had gone on for a long time and wasn’t accomplishing anything. Meanwhile, the closure of the border was actually hurting everyone in Rojava, including their support base,” Marcus told Al-Monitor. “The PKK can be very pragmatic, and in this case, they and their activists realized there was no benefit, just a cost, to continuing. They have lost nothing by abandoning the protest,” Marcus added.

Sources with close knowledge of the US-mediated negotiations between the KRG and Kobane confirmed that the decision to remove the tents came a week before the prison break because the SDF commander had succeeded — albeit after much to-ing and fro-ing — in convincing the activists that it was in their interest to do so. If anything, the rioting had delayed its implementation.