Syrian Kurds say no escapees after IS prison revolt

Kurdish forces have put down a prison revolt in northeast Syria, where Islamic State detainees were apparently protesting their conditions, likely in fear of the coronavirus pandemic. 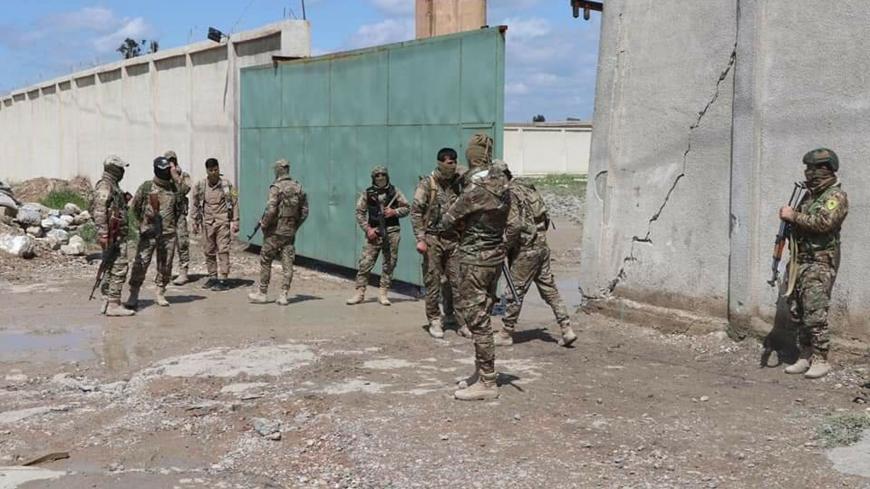 Soldiers gather outside Al-Sinaa prison following a revolt by detainees in Hasakah, Syria, in this picture uploaded March 30, 2020. - Twitter/@AsoNetwork

Kurdish-led forces say they have defused an overnight revolt in a prison in northeast Syria after Islamic State detainees took partial control of the facility apparently to protest their conditions.

In a statement a spokesman for the US-backed Syrian Democratic Forces (SDF) asserted that none of the prisoners had managed to flee Al-Sinaa prison in Hasakah, contrary to initial reports. The building was cordoned off by local security forces, while the coalition provided aerial backup to locate any fugitives.

“We confirm that there are no [reported escapes] of detainees and the prison is completely under control," said SDF spokesman Kino Gabriel.

But hours later, there were unconfirmed reports that the uprising had not been fully extinguished and that gunfire could still be heard while coalition aircraft hovered above.

The North Press Agency, a local media outlet with close ties to the Kurdish-led autonomous administration in northeast Syria, said four detainees had escaped but were subsequently apprehended.

The Rojava Information Center (RIC), a local newsgathering outfit that briefs foreign journalists and produces research reports, said it was likely that the fear of the coronavirus pandemic had triggered the mutiny. Inmates, many of them captive foreign fighters, reportedly ripped out doors in their cells and used them to break down a wall connecting them to adjoining ones, eventually seizing control of the ground floor of the prison.

An anti-terror security official present at the scene told journalists that the inmates had called for the “global coalition and human rights committees" to visit the prison.

The coalition said in a separate statement that the prison held “low level” IS operatives and that it did not staff any detention centers or camps in Syria. The lack of support is an abiding source of rancor within the Kurdish-led administration, which says it cannot cope alone with the burden of thousands of IS captives, including foreign fighters, who are being held in overcrowded facilities.

Western governments are unwilling to take them back and the SDF maintains they should be prosecuted by an international tribunal in northeast Syria. “They committed crimes against our people and it is our right to prosecute them,” SDF commander-in-chief Mazlum Kobane told Al-Monitor in an exclusive interview in January. “The presence of these fighters is a source of strength and inspiration for IS,” he warned.

Since the defeat of their physical “caliphate” in March last year, IS cells have been regrouping and staging small-scale attacks against Kurds and their Arab allies in Deir ez-Zor and Hasakah.

The jihadis recently announced the capture and decapitation of two SDF members in Tuwaymin, south Hasakah, the RIC reported.

The threat of the coronavirus, with Syria formally acknowledging its first death from the disease, has added a new layer of insecurity to the northeast, where some 700 US special forces troops are deployed, notionally to control oil fields that are the Kurdish-led administration’s principle source of revenue.

The risk of contagion has been compounded by Turkey, which has once again turned off water from the Alok power station near Ras al-Ain that supplies nearly half a million people in Hasakah, including IS prisoners and their families who are being housed in overstretched camps.

Elizabeth Tsurkov, a fellow at the Foreign Policy Research Institute who closely monitors the Syrian conflict, noted that nongovernmental organizations aim to provide 3.5 million liters of water to the area per day. The SDF trucks in 200,000 liters. If the target is achieved, it's “barely enough for survival when constant hand-washing isn't required” to fend off the virus, she tweeted.

The water has been intermittently cut since March 22, which marked the latest major stoppage since Turkey began weaponizing water in exchange for electricity to service the swath of territory it occupies in northern Syria.

Turkey claims it needs at least 70 megawatts of electricity from the Tishreen and Tabqa dams to the Mabrouka power plant, which services the area. The Kurds and humanitarian groups say the figure is vastly exaggerated. Turkish officials have also cited “technical issues” as a reason for the sporadic cuts.

Yesterday, Turkey’s Sunni rebel allies reportedly denied access to engineers who were meant to check Alok, which was badly damaged during the Turkish invasion. The engineers working for the central government in Damascus were accompanied by Russian military police.