Syrian Kurdish-led fighters have advanced slowly into the Hasakah prison amid reports of hostages. 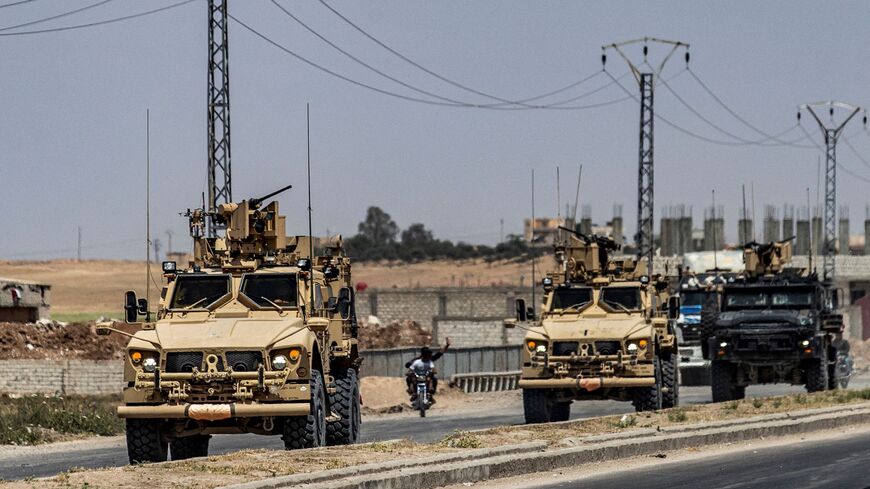 US military vehicles patrol in Syria's northeastern city of Hasakah on May 4, 2021. - DELIL SOULEIMAN/AFP via Getty Images

Fighters from the multi-ethnic Syrian Democratic Forces began clearing cell blocks on the fifth day of a US-backed siege of the prison after calling via loudspeaker for IS detainees inside to surrender.

At least 190 people have been reported killed in the fighting, which broke out after IS fighters launched a complex dual-pronged attack on Hasakah’s Sinaa prison late last week.

Some 550 detainees inside the prison had surrendered by Tuesday afternoon and are being sent to other detention sites under SDF control until the prison is secured, researcher Clara Moore with the Rojava Information Center (RIC) told reporters.

Local security forces continued sweeping neighborhoods in the surrounding city of Hasakah on Tuesday, killing at least 19 suspected IS fighters, according to the SDF.

The facility is the largest of more than a dozen makeshift detention centers for Islamic State prisoners and their families across northeast Syria.

Most of those killed are believed to be IS adherents, of whom unknown numbers escaped the prison’s walls as jihadist fighters took up positions in nearby buildings to open fire on local security forces. It remains unclear how many IS prisoners may remain at large.

When asked about the matter during a press briefing on Tuesday, Pentagon press secretary John Kirby referred Al-Monitor to the US-led coalition. The coalition did not respond to Al-Monitor’s request for comment by publication time.

The US provided airstrikes that continued into Tuesday morning, according to RIC, and deployed Bradley armored vehicles to help secure a perimeter around the prison, the Pentagon confirmed yesterday.

At least 30 members of the SDF have died in the fighting, marking the Kurdish-led militia alliance’s bloodiest skirmish with IS since capturing the jihadists’ final redoubt in Syria’s rural east in 2019.

The SDF said Tuesday that nine prison staff who had been held hostage by IS detainees had been rescued from the north wing of the facility.

Security forces also killed at least five suspected IS fighters who entered and barricaded civilian homes in the al-Zuhour neighborhood “in an attempt to commit terrorist acts” in support of the prison riot, the SDF’s media center said in a statement.

Nine other suspected IS fighters were killed in the city’s east on Tuesday, including two wearing suicide belts, according to the SDF. Three others were reportedly killed south of the city in a firefight with the US-backed militias.

The Sinaa prison held some 3,000-4,000 captured IS fighters prior to last week’s breach, as well as roughly 700 boys, some of whom had been transferred there from IS family internment camps. SDF officials said IS detainees inside the prison took boys hostage.

Human Rights Watch released audio from inside the prison on Sunday in which a teenager claiming to be Australian said he had been hurt in an airstrike but was unable to reach medical aid. RIC confirmed on Tuesday that children were among the wounded being treated by SDF medics.

SDF and US officials have repeatedly warned in recent years that the indefinite detention of IS prisoners in northeast Syria is not sustainable and called for international assistance and repatriation of foreign fighters by their home countries.