Some two dozen hostages were freed and more than a thousand IS detainees surrendered after a six-day firefight that left at least 200 dead. 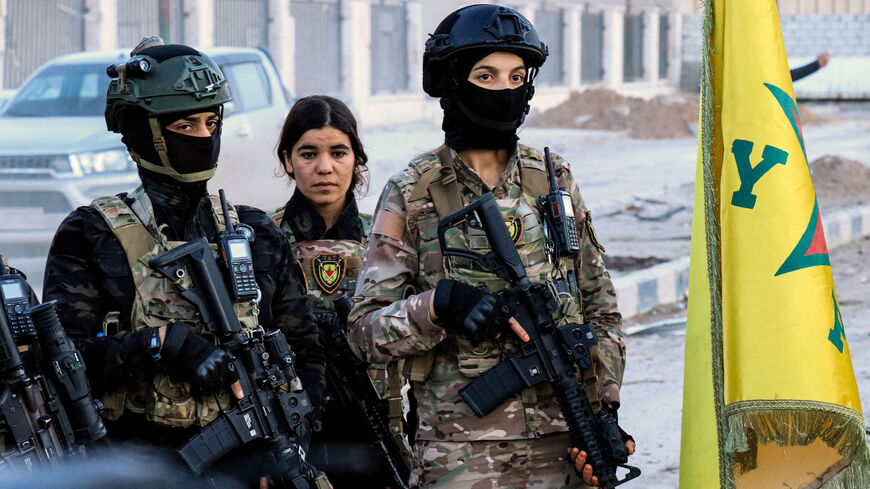 Members of the Syrian Democratic Forces patrol outside a prison in Syria's northeastern city of Hasakah on Jan. 26, 2022, after having retaken control of the facility from Islamic State forces. - AFP via Getty Images

The Kurdish-led Syrian Democratic Forces have regained control of the region’s largest prison for Islamic State detainees after a six-day battle that left more than 200 people dead.

The SDF declared the Sinaa prison in the northeast Syrian city of Hasakah secure on Wednesday afternoon after the last IS detainees inside surrendered. Some two dozen hostages were rescued, SDF officials said.

A final death toll has yet to emerge, and the fate of several hundred boys held in the prison — at least some of whom Kurdish officials said had been held hostage by IS detainees during the battle — remains unknown. Some 30 SDF members were reported to have been killed, according to spokesperson Farhad Shami.

It also remained unclear on Wednesday how many IS prisoners may have escaped. IS initially said it had freed 800 detainees, a claim the Kurdish-led security forces rejected.

More than 1,000 prisoners surrendered to the SDF and have begun to be transported to other detention centers, according to the Rojava Information Center, citing SDF numbers.

The capture marks the end of some of the bloodiest street fighting Hasakah has seen since its liberation from the Islamic State in 2015, shattering the calm to which residents have become accustomed in recent years under the Kurdish-led administration and watched over by the US-led international military coalition.

The SDF said its forces killed more than a dozen suspected IS fighters, some with explosive vests, in firefights around Hasakah over the past few days.

The skirmishes displaced thousands of local residents, mostly to nearby neighborhoods. The UN’s Office for the Coordination of Humanitarian Affairs said 45,000 had left their homes, a number not independently confirmed by Al-Monitor.

US forces in Syria intervened in the fighting with airstrikes, aerial reconnaissance and armored vehicles to help the SDF form a perimeter around the prison.

Last Thursday's multi-pronged assault on the jail began the deadliest IS attack in the region since the group was defeated on the battlefield nearly three years ago and was followed by another brazen IS attack on an army facility in neighboring Iraq. That pre-dawn raid left 10 Iraqi soldiers and an officer dead.

Additional attempted attacks were reported in other areas of eastern Syria, suggesting at least a morale boost to sleeper cells throughout the region if not direct coordination.

The Sinaa prison is believed to have held roughly 4,000 detainees before last week’s attack, according to various numbers previously provided by the SDF. Many of those prisoners surrendered during the battle of Baghouz, where the US-led coalition and SDF cornered the Islamic State in its final stand in rural eastern Syria in March of 2019.

For years representatives of northeast Syria’s multiethnic Autonomous Administration have urged the international community to repatriate their citizens who continue to languish in IS detainee camps and prisons.

Northeast Syrian officials have warned that the indefinite detention of tens of thousands of IS detainees, mostly women and children, is not sustainable — a concern echoed publicly by Pentagon and State Department officials in recent years.

The United States maintains some 900 troops in Syria, down from a peak of roughly 2,500 just a few years ago. The coalition warned in August 2019 that reductions in US troop levels following withdrawal orders from then-President Donald Trump had limited their ability to monitor the detention centers.

"This is not a problem solely within this city. This is a global problem that requires many nations to come together to develop an enduring long-term solution," the coalition's commander, US Army Maj. Gen. John Brennan, said in a statement today.

"We must thoroughly investigate the circumstances that allowed this attack to happen," Brennan said.

The coalition said Sunday that it was "confident in its assessment" that the prison break would not pose a significant threat to security in Iraq or other neighboring countries, but has not publicly said whether it believes detainees escaped locally.

"The jailbreak was destined to happen," a former senior US coalition official told Al-Monitor on Wednesday, adding, "The facilities are old schools and other buildings. Overcrowded radicalized people.”

Following the attack last week, the Biden administration renewed a call for international support to help secure the prisons and repatriate detainees.

“This was inevitable,” another former US defense official who worked on Syria policy told Al-Monitor. “Ignoring a problem doesn’t make it go away.”