Western nongovernmental organizations confirm that the water supply from the Alok pumping station has been repeatedly interrupted since the Turkish offensive. 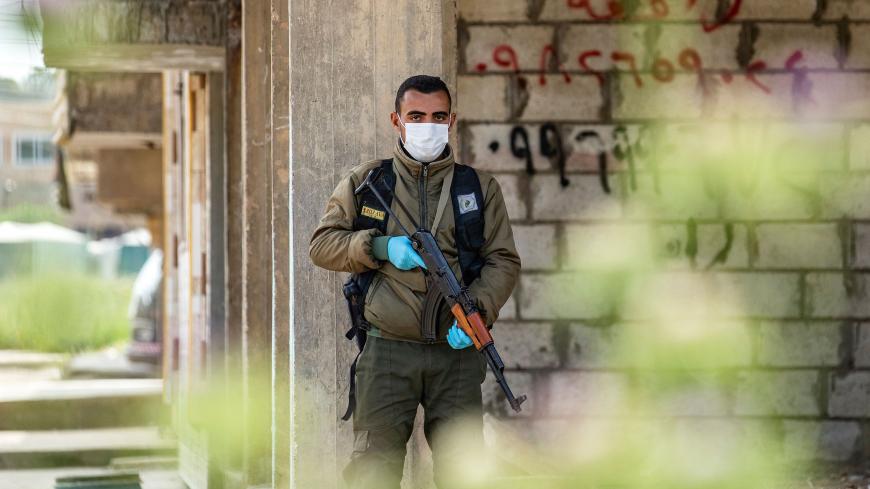 A member of the Kurdish Internal Security Forces of Asayesh stands guard on a deserted street in Syria's northeastern city of Hasakeh on April 30, 2020. - DELIL SOULEIMAN/AFP via Getty Images

The Kurdish-led administration in northeast Syria said Turkey and its Sunni rebel allies halted service at the Alok pumping station in the Turkish-occupied town of Ras al-Ain today, putting efforts to contain the COVID-19 pandemic in the war-ravaged region at risk. Hawar news quoted officials from the autonomous administration’s water authority as saying, “The Turkish occupation and its mercenaries have cut off the water to al-Hasakah city from Alok station for the sixth time consecutively since its occupation of Serekaniye,” using the Kurdish name for the border town that was taken over by Turkish forces in October.

Sources from two Western non-governmental organizations operating in the area confirmed that the water had been turned off this morning. They said the water authority had sent out an emergency alert asking households to manage water consumption in view of the cut.

The supply reportedly resumed but well under full capacity with only two of the five pumps currently operational at the station turned on, the sources speaking not for attribution told Al-Monitor.

The Alok facility supplies potable water to more than 460,000 people in al-Hasakah governorate. They include hundreds of thousands of internally displaced Syrians as well as Islamic State captives and their families — more than half are infants and children — who are being held in overcrowded and under-resourced prisons and camps. Riots have broken out in two facilities over the past month over poor conditions.

The autonomous administration accuses Turkey of weaponizing water as a means of forcing it to supply electricity to the 1,100 square kilometers (680 square miles)  of territory in northeast Syria currently under Turkish occupation at the expense of people who would receive less power daily as a result. More broadly, Turkey is seeking to stifle the Kurdish-dominated autonomous administration through a cocktail of political, economic and military pressure.

Western nongovernmental organizations confirm that the water supply from Alok has been repeatedly interrupted since the Turkish offensive. The station was rendered inoperable by Turkish aerial and ground attacks. Service resumed after Turkey allowed technicians from the Syrian State Electricity Corporation and the Syrian Arab Red Crescent to enter the facility in November.

The stoppages have continued, however, despite two separate agreements struck with Russian mediation for Turkey to supply water in exchange for electricity from the Mabrouka power station, which remains under the control of the Syrian government and the autonomous administration. But Turkey keeps pressing for more and is apparently leveraging the spigot to that end.

“Access to safe water in the context of protection efforts from the coronavirus disease is even more essential and lifesaving than it already is. Hand-washing and good hygiene practices are our first line of protection from COVID-19. The repeated interruption of water supply for children and families who depend on the [Alok] water station for safe water puts them in unacceptable risk,” said UNICEF Syria representative Fran Equiza in emailed comments to Al-Monitor.

Eqiza continued, “We and our partners are supporting families in the city of al-Hassakeh and camps for displaced families with water trucking where needed, but this barely covers minimum needs if the water supply continues to be interrupted. UNICEF has repeatedly called upon all those involved not to use water and water facilities for military or political gain. But our calls continue to fall on deaf ears and children are the ones who suffer first and most.”

It observed that that since the Turkish invasion, residents in Ras al-Ain “haven’t been provided with electricity even when the city was supplied from the Tishrin dam through the Mabrouka power station” because Turkish forces and their Syrian opposition allies had not fixed power lines damaged during the October assault. Meanwhile, the rebel militias restored power to their own headquarters and the homes of their relatives and had stolen generators and other equipment from Alok, the report added.

“Whether the water is back on for another two hours and they cut it off again, it's very clear that we have a very serious problem with parties weaponizing water and humanitarian aid in northeast Syria and risking a COVID response,” said Sara Kayyali, Syria researcher for Human Rights Watch.

“One of the pillars of the COVID response in northeast Syria, as limited as it is, is more hand-washing. Lower capacity, no capacity, it really doesn’t make a difference if the 460,000 people being serviced by Alok are not getting enough water,” she told Al-Monitor via WhatsApp.

Kayyali continued, “It's really disappointing to hear that the parties to the conflict are continuing to play games with people’s lives and doing it so blatantly. It’s really unacceptable.”

Only one COVID-19 death has been recorded so far in the territory run by the autonomous administration, home to over two million people. But experts warn that the risk of mass infection remains perilously high. It is compounded by the United Nations’ reluctance to deal directly with local authorities for fear of jeopardizing its relations with Damascus.

The UN’s World Health Organization insists that all testing be done via the central government in Damascus, slowing the autonomous administration's efforts to contain the virus. Moreover, because of Russian and Chinese objections before the UN Security Council, the body has since January been unable to deliver aid directly to the northeast via Iraq.

Christine Petrie, country director for the International Rescue Committee in northeast Syria, warned recently, “Now that COVID-19 has reached northeast Syria, we’re going to see how truly virulent this disease can be. There are 160,000 extremely vulnerable people living in camps and communal shelters across the region and they have limited ability to protect themselves.”

Petrie added that the risk was especially high at the al-Hol camp, where nearly 70,000 people, mostly wives and children of Islamic State fighters, are being held.

“In al-Hol, the population density is 37,570 people per square kilometer and there are over 65,000 people living in extremely close proximity. There is absolutely no way for people to practice social distancing in this camp, and many are already living with chronic diseases such as diabetes, hypertension and asthma, which means they will be particularly badly affected by this disease if it spreads."