As Turkey and Russia reach an agreement to stop the fighting in Idlib, the Kurdish-run administration in northern Syria has said Ankara's restrictions on its water supply could pose a major threat to security. 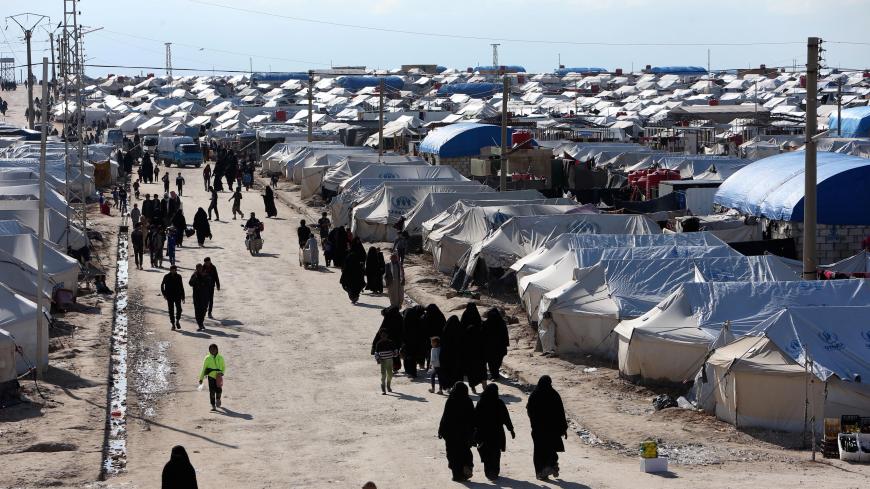 Fears of a breakdown in security in al-Hol camp, which houses tens of thousands of families of Islamic State fighters, are growing amid a continuing standoff between the Kurdish-led autonomous administration in northeast Syria and Turkey over the provision of water and electricity to areas under their respective control. The dispute has taken a dangerous twist as Turkey and Russia face off in the northwestern province of Idlib.

Since last month the US-backed Kurdish government has accused Turkey of cutting off water provided by the Alok pumping station in the Turkish-occupied town of Ras al-Ain to the Hasakah region where al-Hol is located. The facility supplies water to approximately 460,000 people, including to tens of thousands of Syrians displaced by the conflict.

“Service delivery and security are intertwined and there is a lot of concern that sustained water shortages could spark off protests in al-Hol, where the security situation is fragile,” said a well-informed source familiar with the affair. IS women internees have attacked and injured camp guards and rioted in the past. The lack of water also has a major impact on sanitation and health.

Defusing the crisis has become a priority for the United States and the UN’s Office for the Coordination for Humanitarian Affairs, the source, who requested anonymity, told Al-Monitor.

Alok was badly damaged during Turkey’s October invasion of Ras al-Ain and neighboring Tell Abyad. A technical team from the Syrian government responsible for maintaining the facility has been repeatedly denied access to it, most recently on March 3, independent sources tracking the situation confirmed. The water supply remains dangerously erratic, with Turkey accused of deliberately sealing the spigot for political leverage.

Ziyad Rustem, the co-chair for electricity in the autonomous administration, told the Rojava Information Center, a newsgathering body in northeastern Syria, that water had been cut off for another three days.

He said Turkey stopped the flow because it was demanding that the Kurdish-led administration provide 25 megawatts of electricity per hour from its own sources to Ras al-Ain in exchange for the water. Rustem said the original agreement mediated by Russia with Turkey was for the administration to provide 5 megawatts per hour. “Water should not be used as a bargaining chip. This is dirty and unethical. As a matter of humanity we will provide electricity, but Turkey should fix the lines they destroyed themselves,” he said.

The Mabrouka power station that serviced Ras al-Ain was knocked out during the fighting in October, leaving Turkey dependent on the Kurds for electricity "and Turkey hates that," a second knowledgeable source told Al-Monitor.

The water flow resumed today, Sozda Ahmad, an official with the autonomous administration, told Al-Monitor via the Rojava Information Center. But she remained skeptical that it would continue. “We only know that the technicians at Alok have turned on the water [but] it may be shut off at any moment,” she said, commenting on an emerging pattern of pressure on the Kurdish-run administration.

Now that Turkey occupies the large swath of land between Tell Abyad and Ras al-Ain it needs to provide services. “They aren’t going to bring electricity from Turkey and the networks are all linked to other parts of northeastern Syria that they don’t have control over,” the second source said. “It’s quite easy for the Kurdish-run administration, who sees Turkey as the enemy — and doesn’t want Turkey to legitimize their occupation and to establish themselves as a state in control of the area — to say, ‘No, we are not going to help you provide electricity and make everyone think you are this functional administration,’ and so they’ve blocked that.”

The source continued, “I think Turkey has clearly been facing discontent from the populations in the areas that it's controlling and it’s taken this really drastic measure and said, ‘OK, we are going to shut off the water if you don’t give us access to the electricity.’”

The United States, which has around 700 forces deployed in northeastern Syria, has been drawn into the row. “The Americans have tried to negotiate with Turkey, telling them that ‘You as a NATO ally should turn it back on,’ and Turkey has said, ‘You need to tell the Kurds to give us electricity.’”

But in recent weeks Turkey has shifted its ire to Russia amid rising tensions over Idlib. They peaked following an Oct. 27 airstrike in which at least 36 Turkish soldiers died. The attacks were widely believed to have been carried out by Russia though both sides have blamed Syrian government forces in a face-saving ploy.

“Turkey is framing [the power shortage] as a Russian issue now,” the second source said. Russia has enjoyed growing heft in northeastern Syria ever since it brokered a deal with the Kurdish-led Syrian Democratic Forces in October when US forces withdrew from the length of the Turkish border. The source added, “There’s been a really big shift in the power dynamics. The Americans have really been disempowered since October. And [though] Americans still have a lot of influence over the Kurds, Turkey’s target is Russia now because of what’s going in the northwest.”