US, allies press Russia to allow UN aid to Syria from Iraq

Though the United States and allied countries are working to convince Russia to reopen a border crossing between Iraq and Syria to UN humanitarian aid, Moscow could not only refuse but block aid through other points. 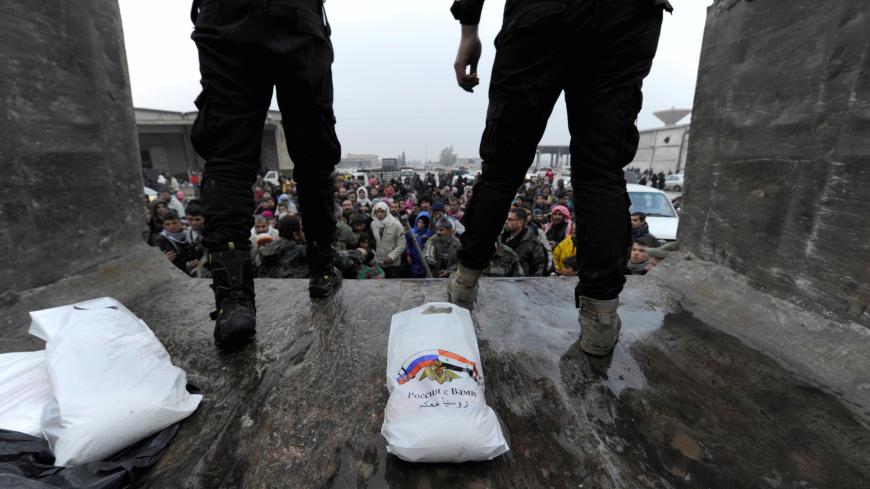 Russian soldiers stand near food aid being distributed to Syrians evacuated from eastern Aleppo in the government-controlled Jibreen area in Aleppo, Syria Nov. 30, 2016. The text on the bag, showing Syrian and Russian national flags, reads in Arabic, "Russia is with you." - REUTERS/Omar Sanadiki

The United States and its allies are lobbying Russia to re-establish access for a border crossing from Iraq to eastern Syria that is deemed critical to UN humanitarian aid deliveries to the northeast part of the war-ravaged nation.

There are mounting concerns, however, that not only will Russia refuse to do so but that it will also wield its veto power at the UN Security Council to block UN aid coming through the two remaining access points to northwest Syria via Turkey, sources familiar with the deliberations told Al-Monitor. Moreover, governments who want access restored are divided on how to handle Russia, they said, easing the Kremlin’s ability to impose its will.

The Yaroubiyah crossing was sealed by the UN Security Council under Russian and Chinese pressure on Jan. 10 — a further cynical display of how politics often trump humanitarian concerns at the world body.

Yaroubiyah was the principal hub for medical supplies the World Health Organization delivered to the Kurdish-run autonomous administration in the northeast. Its closure has dealt a powerful blow to the fledgling administration’s efforts to contain the COVID-19 pandemic. The central government in Damascus is doing little to ease the Kurds’ plight and the WHO has been blasted over its reluctance to engage the Kurds for fear of upsetting Damascus.

David Swanson, a spokesman for the UN Coordination Office for Humanitarian Affairs, told Al-Monitor in emailed comments, “The northeast has been severely affected by nine years of crisis with the number of facilities, hospital beds and health care workers well below accepted standards. For example, none of the districts in the northeast meet the minimum standard of 18 hospital beds per 10,000 [people].”

The risk of contagion is especially high in the region’s overflowing displacement camps and prisons, home to thousands of increasingly rebellious Islamic State fighters and their families. The Rojava Information Center noted in a brief today that “widespread disease [in the camps] and detention facilities mean medical staff fear an up to 10% death rate if the disease enters the camps.”

“Russia and China’s opposition to extending full cross-border humanitarian assistance in January has made the job of delivering life-saving assistance during the pandemic much harder and put the lives of millions of innocent Syrians in the balance,” a state department official told Al-Monitor in emailed comments. “To be clear: Russia must bear responsibility for this situation,” the official added.

The UN’s undersecretary for humanitarian affairs and emergency relief coordinator, Mark Lowcock, told the Security Council yesterday that medical supplies are reaching only 31% of the northeast Syria facilities that previously got them through Yaroubiyah.

Over two million people, including large numbers of Arabs, live in the Kurdish-run territory. Miraculously, there have been only five reported cases of COVID-19 and one death in the northeast so far.

UN and US officials are now mulling a strategy to break the deadlock without provoking Moscow into shutting down the northwest as well.

“The question before them is, do they move to get Yaroubiyah reauthorized now or do they wait until July 10? Russia has been clear in its recent council interventions: ‘Don’t even try to reauthorize Yaroubiyah, we aren’t going for it,’” one of the sources familiar with the deliberations said. The UN has been equally clear that “cross-line support” or aid channeled through existing hubs, mainly Damascus, has fallen far short of filling the gap from Yaroubiyah, not least because of government obstructionism.

Those pushing for getting Yaroubiyah reopened before July are seeking a formula "that makes it uncomfortable as possible for Russia to stand in the way of what clearly is a humanitarian imperative,” said the source, speaking not for attribution.

The United States’ Syria envoy, Jim Jeffrey, is said to advocate this approach.

Other Security Council members favor waiting until July. France is especially wary of upsetting Moscow and is among those erring on the side of caution, the source said. Germany and Belgium, who are among the 10 non-permanent members of the Security Council, are likely to follow France’s lead. “People are so terrified of what the Russians would do that they’ve refused to hold the line on anything, making concessions before they are even demanded,” the source said.

In any case, humanitarian imperatives appear to have had little part in Russia’s calculations as it helps the regime bomb hospitals and homes, killing and maiming thousands of civilians as it claws back rebel-held territory.

“Russia sees the UN cross-border mechanism as a limitation of the regime’s control over UN humanitarian support in Syria. It therefore tries, step by step, depending on the opportunities, to dismantle the mechanism,” observed Charles Thepaut, a visiting fellow at the Washington Institute for Near East Policy. “In addition, Russia wants to exploit the partial withdrawal of US troops in October 2019 to push all US troops out of northeastern Syrian and push [the US-backed] Syrian Democratic Forces [SDF] closer to the regime."

Thepaut told Al-Monitor, “By closing Yaroubiyah, Moscow limits access for NGOs refusing to work with the Syrian regime and benefiting from the security brought by the US military presence. Moscow therefore increases the SDF’s reliance on Damascus for humanitarian assistance, especially medical equipment.”

As such, few believe Russia will yield to Washington’s pressure to reinstate access. Russia’s ambassador to the UN, Vassily Nebenzia, recently called the effort a waste of time.

Ruslan Mamedov, a Middle East expert at the Moscow-based think tank Russian International Affairs Council, argued, however, that the United States and Western partners ought to practice what they preach. “The United States has also rejected a proposal to lift sanctions that influence the humanitarian situation in the country as well,” he told Al-Monitor. Mamedov was alluding to Washington’s refusal to lift sanctions on Syria.

Dareen Khalifa, a Syria researcher for the International Crisis Group, said Russia was “definitely hinting” at closing access through Idlib. “Today over a million of Idlib’s population — some of them already displaced twice or thrice from other parts of the country — rely primarily on cross-border humanitarian aid for living. The potential of using the crossing as a tool for political pressure would only exacerbate an already tragic humanitarian situation,” she told Al-Monitor.

Ankara convinced Russia in January to withdraw its December veto over the two border crossings to the rebel-held province. It’s likely to succeed in getting the Russians to keep the aid pipelines open in July as well, reckons Fabrice Balanche, Syria expert and associate professor at France’s Lyon II University.

“Russia won’t want to upset [Turkish President Recep Tayyip] Erdogan at a time when the Americans are trying to blow up the Russia-Turkey relationship,” Balanche told Al-Monitor. But Moscow’s thinking may shift “should Turkey fail to tame the jihadists in Idlib and prevent them from continuing to attack [the Russian base in] Hmeimim,” he added.

Russia’s approval of the northwest entry points predated Turkey’s walloping of Syrian regime forces in February as they sought to capture Idlib proper. Hundreds of Syrian forces were killed in the Turkish assault, which inflicted more damage on President Bashar al-Assad’s army than at any time during the course of the nine-year-long conflict. “Turkey has certainly increased its military standing after inflicting important losses to regime forces, and this has improved the Turkish negotiation position with Russia. However, it may not be enough to counter the Russian strategy of freezing the front line for some time before letting the regime attack again,” said Thepaut.

A cease-fire struck in March, largely on Moscow’s terms, has put Russian-Turkish cooperation in Idlib back on track for the time being. Erdogan and Russian President Vladimir Putin spoke to each other after a nearly month-long pause Monday to discuss the situation in Syria and Libya.

“Moscow and Ankara need each other to achieve their own goals and interests trying to avoid frictions and confrontations,” remarked Alexey Klebhnikov, another Middle East expert at the Russian International Affairs Council. “They will continue coordination on Syria regardless of US-Turkey ties,” he told Al-Monitor.

Idlib figures in Ankara’s own calculations in different ways. One is to transfer Sunni Arab militants and their families to the 1,100 square kilometer (680 square mile) stretch of territory between the towns of Tell Abyad and Ras al-Ain, which Turkey occupied in the northeast during its October “Operation Peace Spring” against the SDF.

“The aim is to recreate an Arab belt in the heart of Kurdish territory, much as the Baathists did in the 1960s and the 1970s,” Balanche said.

The effort to consolidate and sustain the new status quo has played out at the UN’s discussions on aid pipelines to Syria. In December, Turkey proposed opening a new border crossing for aid deliveries through Tell Abyad. At Jeffrey’s urging, the United States backed the move, sources familiar with the discussions said.

“Turkey wants the UN to help fund its occupation,” Salih Muslim, the deputy co-chair of the Democratic Unity Party, which shares power in the autonomous administration in northeast Syria, told Al-Monitor.

For a while, the UN’s Lowcock was on board. In a February report, the UN touted Tell Abyad as one of several alternatives to Yaroubiyah despite some misgivings about delivering aid to occupied territory. But that bridge had already been crossed in the majority-Kurdish enclave of Afrin occupied by Turkey in 2018, where the UN delivers some humanitarian aid.

“Logistically and geographically, Tell Abyad makes sense,” one of the sources said. But the politics of it didn’t. “There is no way that Turkey is going to allow aid through Tell Abyad that would support SDF-controlled areas in the northeast. Nor is the SDF going to want to allow the Turkish Red Crescent for delivery purposes into areas it controls. You are basically transporting all the cross-line dynamics in Syria but to a different set of actors,” the source said, drawing parallels with the hurdles thrown up by Damascus for aid destined for areas outside its control. “Tell Abyad was the least bad of only bad options. It's unviable.”

Turkey has since 2017 gradually disallowed aid to cross from its borders to the Kurdish-run areas, part of an ongoing effort to squash the Syrian Kurds’ experiment with self-rule.

Since October, it has periodically turned off water from the Alok pumping station in Ras al-Ain, on which some 450,000 people in the Kurdish-run region’s Hasakah province depend. Lowcock alluded to it yesterday: “The provision of water from the [Alok] station was again interrupted and reduced many times since my last briefing, creating severe disruptions.” Lowcock added, “At least half a million people are affected. Access to water in all areas is all the more critical in this COVID-19 pandemic.”

Lowcock’s interest in Tell Abyad appears to have waned.

In a May 13 report reviewing the UN’s cross-border and cross-line humanitarian operations, Tell Abyad was mentioned only in passing. France and China, which seethes over the presence of thousands of ethnic Uighur jihadis in Idlib, had already voiced firm opposition to the idea. The US State Department did not respond to Al-Monitor’s question about whether it still supports Tell Abyad.

Washington’s overarching priority is to get Yaroubiyah reinstated.

“The United States will continue to work with the [UN] Secretary General and [Security] Council members to ensure that UN deliveries will resume to the communities in the northeast regardless of who controls the territory, in keeping with our principled humanitarian approach to the crisis in Syria,” the state department official said.