The Islamic State launched a massive attack on a Kurdish-run prison in Hasakah in northeastern Syria with the aim of releasing about 5,000 inmates. 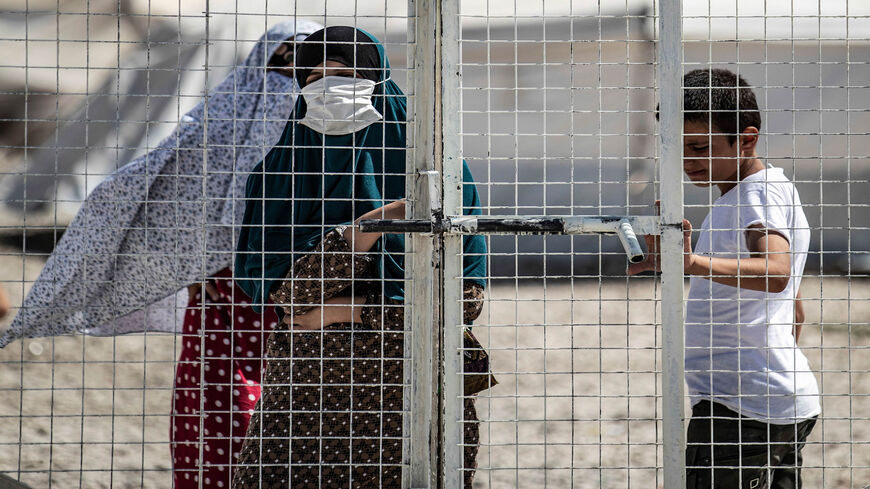 A woman stands by a metal fence at Roj camp that houses family members of people accused to belong to the Islamic State and who were relocated from al-Hol camp, in the countryside near al-Malikiyah, Hasakah province, Syria, Sept. 30, 2020. - Delil Souleiman/AFP via Getty Images

The Islamic State (IS) launched an attack against Al-Sinaa prison in northeast Syria on the night of Jan 20-21. The prison, located in Hasakah’s Ghweran neighborhood, is run by the Kurdish-led Syrian Democratic Forces (SDF).

Clashes then erupted between the SDF and IS militants around the prison, before spreading to other nearby areas.

On Jan. 25, the Syrian Observatory for Human Rights said the clashes resulted in the death of 159 people, including 107 IS militants, 45 SDF forces and prison guards, and seven civilians.

The war monitor said the death toll may be higher than announced given that there are dozens whose fate is unknown, in addition to the large number of wounded, some of whom are in critical condition.

Meanwhile, cautious calm prevailed Jan. 25 (as of the time of this writing), after the SDF, backed by the US-led coalition, managed to take control of a number of wings in the prison, and at least 300 IS militants surrendered, according to the SDF.

The Ghweran prison houses around 5,000 foreign and Syrian IS fighters and their relatives arrested by the SDF over the past few years during battles with IS in northeastern Syria with the support of the US-led coalition.

Most of the prisoners are prominent IS leaders who had participated in the battles and held administrative and military positions during IS’ control of areas in Syria in previous years.

On Jan. 22, the activist-run Euphrates Post Network reported that most of those who launched the attack on the prison came from the countryside of Deir ez-Zor and the city of al-Shaddadi in the southern countryside of Hasakah and were stationed in several houses in the Ghweran neighborhood.

The network said, citing its own sources, that the attack had been in the pipeline for several months after IS was recently able to recruit new members in the Deir ez-Zor countryside in preparation for the latest operation aimed at releasing IS prisoners from Al-Sinaa prison.

The IS-affiliated Amaq News Agency cited IS sources as saying that the group’s members killed dozens of SDF members and released more than 800 prisoners in batches in the first two days following the initial attack.

The agency reported that the attack was launched by “martyrs” Abu Abd al-Rahman and Abu al-Farouq al-Muhajirin who detonated truck bombs at the prison gate, thus causing major destruction at the site, killing and wounding many members.

On Jan. 25, the SDF’s media center said that the SDF and its security forces regained control of several points on the northern side of the prison walls.

In a Jan. 24 statement, the media center announced, “Three hundred IS mercenaries who participated in the attack on Al-Sinaa prison surrendered. At 5 a.m., after a call [on the militants] to safely surrender and hand over their weapons, our forces raided and took control of one of the prison buildings where mercenaries were holed up. About 300 mercenaries surrendered to our forces, and the operation is ongoing according to plan.”

It continued, “Our forces and the Internal Security Forces continue to comb the Ghweran neighborhood and pursue terrorist cells that tried to support IS mercenaries in prison. Our forces are showing a high level of caution given the presence of civilians in the area who were used at some point by those mercenaries as human shields. During a clash with those cells, eight dangerous mercenaries were eliminated.”

Khalil Miqdad, a Qatar-based researcher focusing on the affairs of jihadist groups, told Al-Monitor, “The IS organization wants to prove through this attack that it is following the orders of its leadership as far as prisoners are concerned in order to prove that it did not abandon them. Such a strategy can have great positive psychological and moral effects on the group’s members.”

He said, “After it lost its last stronghold in Baghouz, the organization sought to rearrange its cards, including its leadership and combat strategy. IS considers that each battle goes through three stages, which are attrition, wall demolition and then controlling some important positions. And this is its current strategy.”

Miqdad noted, “Attrition is carried out based on the surrounding circumstances through groups striking in separate places, continuously and intensively. These groups are tightly intertwined and difficult to dissolve and penetrate. They enjoy relative independence in terms of the decision to attack, withdraw and choose the target. Their aim is to strike the enemy’s resources, namely its financial and human capabilities, by targeting valuable and important equipment and carrying out assassinations against informants and prominent leaders, in addition to constant ambushes and attacks.”

He stressed that several factors helped IS in its latest operation, the most important of which was the members’ commitment to the leadership’s instructions to free prisoners, and the experience they gained from several attempts to storm prisons in Iraq, all the while drawing lessons from previous failed attempts to free the prisoners of the Ghweran prison, he added.

Raed al-Hamid, an Erbil-based journalist and researcher, told Al-Monitor, “Among the most important strategies of IS is storming prisons and releasing detainees, but this is no longer as easy as it was in 2013 when IS succeeded in storming Abu Ghraib prison, west of Baghdad. The IS attack in Hasakah may have repercussions on IS’ presence and activities in Iraq, as IS militants who have managed to escape from Al-Sinaa prison in Hasakah might cross the border into Iraq.”

He said, “However, IS is no longer as strong as it was in 2014, as it has lost many of its leaders and members, let alone its military capabilities. It also lost its ability to move in numbers large enough to break into or attack Iraqi prisons.”