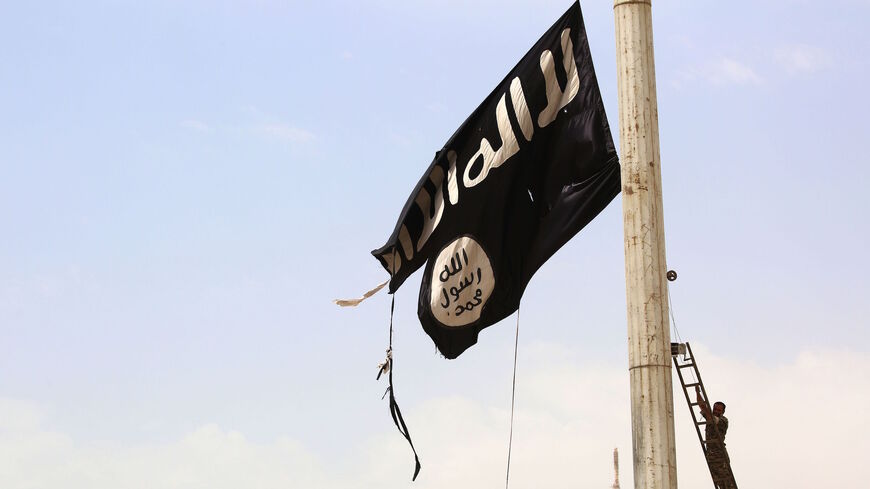 A member of the US-backed Syrian Democratic Forces removes an Islamic State flag in the town of Tabqa, about 55 kilometers (35 miles) west of Raqqa, as they advance in their battle for the group's de facto capital, Syria, April 30, 2017. - Delil Souleiman/AFP via Getty Images

ERBIL, Iraqi Kurdistan — Reports of a planned Nov. 8 attack on a detention facility hosting thousands of alleged Islamic State operatives from Iraq and other countries in northeastern Syria earlier this month have heightened concerns about risks to regional stability and gains against the international terrorist group.

The Sinaa prison, which was apparently the intended target, holds several thousand IS operatives and is known to only occasionally be subjected to sweep-up operations by the Kurdish-led Syrian Democratic Forces (SDF). The SDF has repeatedly lamented a lack of funding and personnel to do more than simply allow the prisoners to effectively run their own affairs within the prison. The attack is thought to have been planned to liberate prisoners held.

The next day, the international coalition (CJTFOIR) tweeted about “joint success” in an operation with the SDF in the Deir ez-Zor region, but did not go into specifics.

On Nov. 13, three Iraqi nationals including one woman were reportedly shot and killed in al-Hol camp in Hasakah province in northeastern Syria. The camp is run by the Kurdish-led administration and currently houses over 50,000 people, roughly half of whom are Iraqis. Of the 78 people known to have been killed in the camp this year, 58 were Iraqis and at least 10 were beheaded.

The Sinaa prison is located in the Ghweiran neighborhood in the western part of the city of Hasakah. The Hasakah region is located north of the Deir ez-Zor region. Hasakah is inhabited by both Kurds and Arabs, while Deir ez-Zor is almost entirely Arab.

The regional capital of Deir ez-Zor is west of the Euphrates River and is under Syrian government control. The Hasakah region as well as the eastern part of Deir ez-Zor are under SDF control.

A source from eastern Syria told Al-Monitor Nov. 13 that the Sinaa prison continues to host many high-value Iraqi IS leaders, including several who had had direct contact with former IS leader Abu Bakr al-Baghdadi, who reportedly blew himself up in October 2019 after being cornered in a raid by US forces in Syria’s northwest.

The source claimed many of these Iraqi IS fighters and commanders had been involved in al-Qaeda in Iraq before that, and thus have extensive networks and over a decade of experience to draw on and to influence other detainees with.

He also claimed that some Russian nationals who had been in SDF-run detention facilities in northeastern Syria for allegedly being IS fighters had recently been moved to Damascus “to ensure that they do not escape,” presumably after negotiations with the Syrian government.

The source spoke on condition of anonymity, but had met with Al-Monitor in previous years and the information provided had later proven accurate.

The Bas News website, which focuses on Kurdish areas, reported Nov. 9 that the international coalition had transferred 15 IS leaders to a base it has a presence on in Shaddadi, in Hasakah province but south of the city, and that “the transfer process comes as a prelude to transferring the insurgents to Iraq.”

The media outlet cited unnamed sources as saying, “The CIA interrogated the detained IS leaders inside Sinaa prison in Hasakah before they were transferred to Shaddadi base.”

It is unclear whether this alleged transfer and interrogation occurred before or after the operation.

Security issues are rampant at SDF detention facilities in northeastern Syria and the Sinaa prison has reportedly experienced multiple, serious cases of rioting in recent years. In early 2020, detainees reportedly "smashed all the CCTV cameras and the internal doors.”

As of the end of last year, the SDF reportedly were holding at least 10,000 IS prisoners in approximately 14 detention centers. Most of the prisoners were captured in early 2019 when the last territory held by the international terrorist group was taken in an offensive by the SDF and the international coalition.

Over a thousand of the IS detainees are Iraqi nationals, though some 100 were reportedly handed over to the Iraqi government earlier this year.

Many of these Iraqi IS affiliates had been pushed across the border into eastern Syria by Iraq’s western Anbar offensive in 2017. Iraq declared that IS had been defeated in its territory in December 2017 after the last IS-held city in the country, Rawa, was retaken in November of that year.

The Washington-based Defense One website reported in February that the United Kingdom planned to provide funding to “double in size the current facility at Hasakah, a series of three converted school buildings that holds roughly 5,000 prisoners … which is overcrowded and effectively run by inmates internally.”

The publication quoted Lt. Gen. Paul Calvert, commander of the US-led coalition to defeat IS, as stressing, in relation to the massive prison in Hasakah, “If you have a breakout up there, that's instant combat power that immediately goes back into [IS].”

The SDF has long warned that it cannot handle the current number of IS fighters in its facilities without additional support.

Several countries continue to come in for criticism over delaying or refusing to take back their own citizens currently detained in northeastern Syria for alleged or clear IS affiliation. Iraqis and Syrians account for the largest number of detainees by far, however.

Some accuse the SDF of using these detainees to try to extract concessions and increase financial and other support from countries including the United States.

The SDF has also long been accused of arbitrary detention of local Arabs and of corruption within both its prisons and camp facilities: allegedly releasing IS affiliates who can pay large sums but refusing to release Arabs arrested for unclear reasons — and with no apparent IS affiliation — unless bribes are paid. The Kurdish-led administration has long denied these accusations.

In early 2017, Al-Monitor met with Iraqi nationals previously in al-Hol camp who had been brought back to camps for internally displaced persons in Iraq’s Salahuddin province. They claimed that al-Hol camp officials had taken their Iraqi government-issued IDs and other documents and refused to give them back unless large bribes were paid.

A UN official had at that time confirmed that confiscating refugees’ IDs was “indeed the standard practice of the Kurdish camp management, despite UNHCR’s advocacy.”

The porous border between Iraq and Syria and the thousands of IS operatives detained in eastern Syria with links to Iraq means that any prison break in eastern Syria would almost immediately have serious repercussions on its eastern neighbor as well.