Tens of thousands of Iraqi nationals, mostly women and children, are “stuck in limbo” in a camp in northeastern Syria as violence against them and regional risks increase. 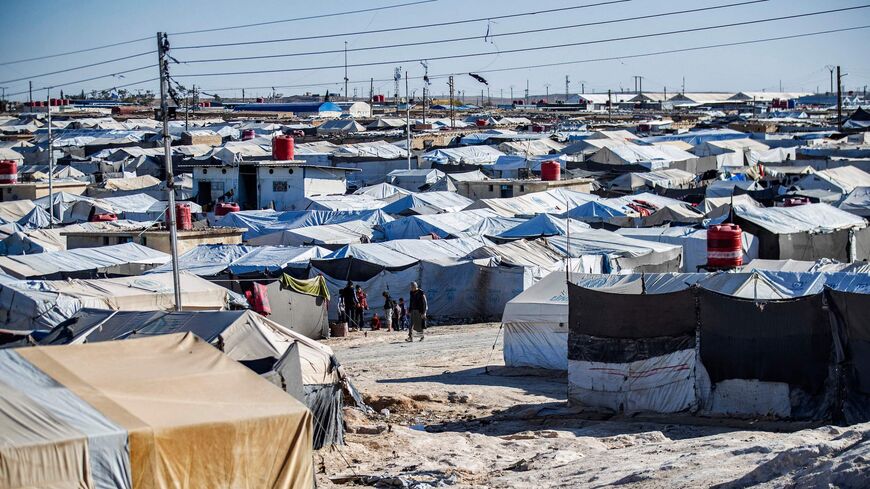 ERBIL, Iraq — Iraqi nationals continue to be killed in the vast confusion of the sprawling al-Hol camp in northeastern Syria as repatriation continues at a trickle.

Many are women being found with gunshot wounds to their heads, while some have been beheaded.

Children have been killed by security forces during operations in the camp, which is under the administration of the US-backed, Kurdish-led Autonomous Administration.

The Lead Inspector General Report to the US Congress on the first quarter of 2022, meanwhile, stated that “at the current pace, it will take nearly 15 years to repatriate all the Iraqis at the camp.”

At least nine people were killed in the camp in April, six of whom were Iraqi nationals; this was reportedly over double the number of people “assassinated" the previous month, allegedly by members of the Islamic State (IS).

On May 9, “The US Department of the Treasury’s Office of Foreign Assets Control (OFAC) designated a network of five Islamic State of Iraq and Syria (ISIS) financial facilitators,” some of whom had been sending money into the al-Hol camp.

It noted that that network had used some of the funds it collected in various countries to smuggle children out of the camps, handing them over to IS “foreign fighters as potential recruits.”

“This action coincides with the 16th meeting of the Counter ISIS Finance Group (CIFG) of the Global Coalition to Defeat ISIS. The United States, Italy and Saudi Arabia co-lead the CIFG — comprising nearly 70 countries and international organizations — and coordinate efforts against ISIS financial support networks worldwide,” the statement added.

During the first ministerial meeting of the international coalition to defeat IS in Morocco this month, Iraq’s foreign minister said that 500 Iraqi families had been repatriated from the al-Hol camp to the Jada’a camp in Ninevah province.

At a Baghdad conference last month, national security adviser Qassem Al-Araji had urged foreign governments to repatriate their citizens from al-Hol, saying that with “each day that passes with the camp still there, hate grows and terrorism thrives.”

The al-Hol camp is believed to currently house an estimated 57,000 people, about 10,000 of whom are non-Iraqi foreigners.

Iraq nationals account for over half of those now held at the massive, largely uncontrolled camp in northeastern Syria.

The Kurdish-led, US-backed Syrian Democratic Forces (SDF) took the last urban area held by IS from the group in the eastern part of Deir ez-Zor province in early 2019.

Iraq declared victory against IS in December 2017 after retaking the last two cities in its western Anbar province near the Syrian border. Many IS fighters and their families and others fled western Iraq into the eastern part of Syria’s Deir ez-Zor province during the fighting.

A Save the Children report noted earlier this year: “During the final offensive against ISIS in Hajin and Baghouz in early 2019, the camp’s population skyrocketed from approximately 9,800 people to over 73,000 people.”

That number has been reduced largely through the release of Syrian nationals through tribal “sponsorship” initiatives. Some Western and other countries have taken back a small number of their citizens as well.

National security advisor Araji noted in the April conference in Baghdad that IS “continues to represent a real threat at al-Hol,” which also negatively impacts Iraqi security.

A major jailbreak in the same Syrian province as the camp, Hasakah, in late January significantly increased security threats to the region.

A local source told this journalist in late January that days after the attack — which continued for about 10 days and left hundreds dead and hundreds missing — some of the fighters who had fled the jail had “arrived in Raqqa and taken control of areas that Syrian government forces have left."

He claimed that “at least four areas are now controlled by IS in Raqqa,” and that plans were being made to get more IS relatives out of the al-Hol camp.

UN envoy to Iraq Jeanine Hennis-Plasschaert had during the April conference in Baghdad noted that about 30,000 Iraqis associated in various ways with IS fighters — many family members, but also victims of IS and others with no association at all to them — had simply been stuck in limbo in the al-Hol camp for years.

Some are believed to be Yazidi and other women who were tortured, enslaved and impregnated by members of the international terrorist group.

Many are children now at severe risk.

A Save the Children report issued in April stated: “In 2021, an average of more than two people were killed per week, making al-Hol, per capita, one of the most dangerous places in the world to be a child.”

“The report comes just four weeks after a child was killed and five more children injured during security operations in al-Hol,” read the report.

Save the Children’s Syria Response director Sonia Khush noted in a statement on the report that “insecurity in the camp needs to be effectively addressed without adding more stress and fear to these children’s lives.”

Many Iraqis, meanwhile, are concerned about the impact that bringing back large numbers of people associated with IS or who in any case have been exposed to their ideology and violence for years may have on areas still struggling to recover.

The hundreds brought back to Iraq in recent months have been housed at the Jada’a 5 camp near the town of Qayyarah in Iraq’s northwestern province of Ninevah.

The first repatriations to this camp occurred in May 2021 after years of discussion and opposition from local inhabitants of the area, as Al-Monitor reported in 2019.

On May 16, Sheikh Abdulrazzaq al-Wagaa, a prominent leader of the Jabouri tribe — one of the two largest in Iraq and to which most Qayyarah inhabitants belong — told Al-Monitor via WhatsApp in response to a request for comment that the repatriation was “not being managed in correct and safe ways.”

He stressed that any camps holding returnees should be “far from cities, towns and villages,” with the inhabitants not coming “into contact with the citizens to avoid problems in general.”