What is stopping the liberation of Mosul?

The liberation of Mosul from the Islamic State will be a complicated task for the Iraqi forces, as several players will be involved in the operation. 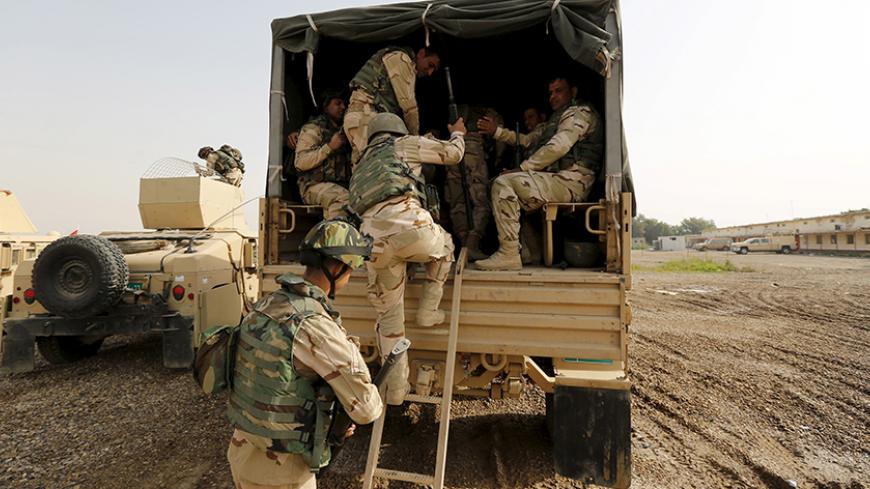 Ongoing preparations are taking place for the coming battle of Mosul, which appears to be getting closer, military sources say. Iraqi forces will face a difficult and costly battle and many obstacles before they can take over the western bastion of the Islamic State (IS).

In a speech praising the army's victory in Ramadi against IS, Prime Minister Haider al-Abadi said Dec. 28, "We are coming to liberate Mosul, and it will be the fatal and final blow to [IS].”

The liberation of the city of Ramadi on Dec. 28 was the first major success of Iraqi forces against IS, which took over large swaths of western and northern Iraq in June 2014.

Iraqi military sources, speaking on condition of anonymity, told Al-Monitor that the Mosul attack would most probably be launched by June. Political bickering may cause the postponing of the operations.

However, constrained by weather conditions, Iraqi and coalition forces will have to capture the city before the coming winter if they are to retake Mosul in 2016, as Abadi suggested. Military sources say the battle for Mosul will have to take place in the spring or in summer, as IS generally uses bad weather and the cover of rainy nights to attack frontlines.

Located 400 kilometers (248.5 miles) north of Baghdad, Mosul, the second-largest Iraqi city, is the self-proclaimed Iraqi capital of IS and home to more than 1 million Iraqis.

The city has become emblematic in the war against IS, and its liberation would not only destroy IS’ center of power but deal a huge moral blow to the organization’s expansionary narrative by marking the end of the caliphate, as proclaimed by its leader Abu Bakr al-Baghdadi.

Retired US Col. Harry Schute, who is currently a senior security adviser to the Kurdistan Regional Government, told Al-Monitor that it is still hard to say when the Mosul attack will take place, noting that “shaping operations is required before such an offensive.”

These preparatory steps, which appear to be starting, include a further attack on IS’ direct and strategic interests and the organization’s supply lines and strategic locations.

On Dec. 10, coalition strikes had killed mid-level IS leaders in Syria and Iraq.

With the takeover of Sinjar last November, west of Mosul, Kurdish forces, backed by US airstrikes, have also worked on cutting IS’ supply lines, namely by controlling Highway 47 that connects Raqqa to Mosul.

Other key cities and regions will have to be taken over before any attack on Mosul can be launched. Schute said that the rest of the Tigris area, namely Baiji and cities such as Gyara and Tal Afar, will have to be liberated before the Mosul offensive. The Fallujah takeover might also be necessary, he added, given the tribal uprising against IS percolating there.

For military expert Ahmad Shawki, Gyara will be instrumental in the Mosul battle as it is an important supply line for IS connecting the city to Hawija. In addition, capturing the city of Hit could also be a prelude to any Mosul operations. Al-Arabiya Al-Hadath reported Feb. 22 that Iraqi and tribal forces were congregating in the Ain al-Assad base, south of Hawija in Anbar, to attack Hit.

Shawki added that after cutting supply lines and taking over strategic areas, the Iraqi forces’ advances toward Mosul will still be problematic because of the high population density; the sheer size of the city makes it a difficult target.

"Mosul is different from Ramadi; it is a very large city with over 2 million people,” Mosul-born political activist Ghanem al-Abed told Al-Monitor.

Abed said that the surrounding areas and the western part of the city, which are less densely populated and more recently built, will be relatively easy to take over. However, Mosul contains other very dense and old areas barely accessible by car, which will complicate the advance of forces and cause high human losses, he added.

IS is also believed to have set up elaborate defenses, booby traps and mines as it did in other cities such as Ramadi.

Retaking the mostly Sunni city of Mosul will be rendered more difficult because of the number of local and regional players in northern Iraq with diverging agendas. “Mosul is not only populous but multiethnic, which means multiple players will be involved in the operation,” Abed added.

The region is comprised of different and often rival ethnic and religious groups including Sunnis, Shiites, Christians, Kurds, Turkmens and Yazidis.

He estimates that a total of 10,000 fighters have been trained for the Mosul battle in the base, where some 150 Turkish military are present. Iraqi newswire Al-Mada reported that 1,000 Iraqi forces had already been moved back to Makhmur, and that 26,000 police forces were ready to fight for the liberation of Mosul.

Shawki added, “There are also the Mosul tribes that will certainly play a role in the battle, as well as Christian and Yazidi Popular Mobilizations Units, amounting to some 1,500 fighters.”

The Popular Mobilization Units consist of a coalition of mostly Iran-backed Shiite militias set up to fight IS.

According to Reuters Dec. 29, Kurdish forces have positions east, north and west of Mosul, while Iraqi security forces backed by Shiite militias have positions in Baiji, south of Mosul. Recent articles by Al-Arabiya and Al-Mada quoted Feb. 22 Abadi and House Speaker Salim al-Jubouri discussing the future involvement of Shiite Popular Mobilization Units in the Mosul battle, which was denounced by members of the Ninevah governorate on the same day.

“Whether Shiite militias will play a role or not in Mosul will be a decisive factor in the next battle and determine whether the local population will cooperate or not with Iraqi forces and facilitate their entry into the city,” Abed said. On US demand, Iraqi military commanders kept Shiite militias away from the Ramadi battlefield, to avoid clashes with Sunni civilians.

The Baghdad government needs to win over local populations to prevail over IS in Mosul. For that, it will have to decide carefully which factions can support the Iraqi forces' advance on the city, while avoiding the exacerbating sectarian sentiments.

IS’ objective will thus be to postpone, as much as possible, the city’s liberation by creating stalemates in areas it already holds and using sectarian fault lines in its favor.