Although the Sunni forces oppose the participation of the Popular Mobilization Units in the battle for Mosul, the Iraqi government has opted for their participation in the absence of a US veto. 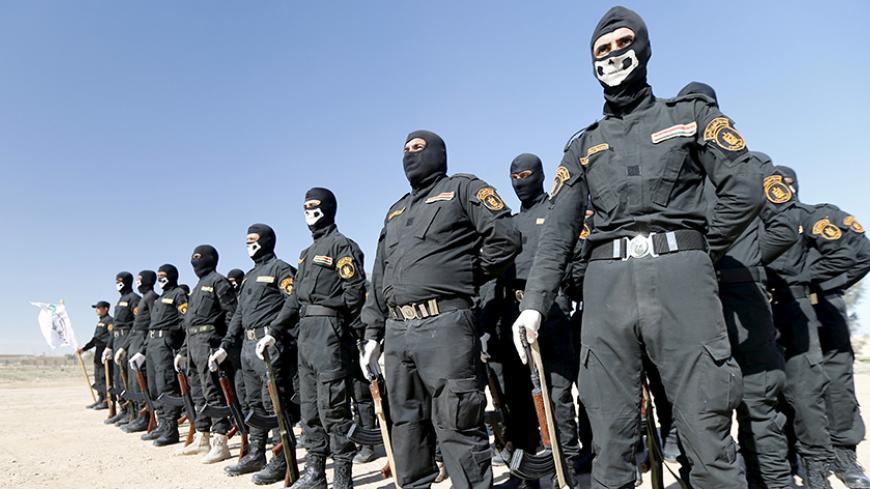 NAJAF, Iraq — On March 24, Brig. Gen. Yahay Rasoul, the spokesman for the Joint Special Operations Command, the special operations task force in the fight against the Islamic State (IS), told Iraqi state TV that the operation to liberate Mosul was jointly launched by the Iraqi forces and the US-led coalition. Prior to the announcement, Iraqi Prime Minister Haider al-Abadi said in a statement in February that the campaign to liberate Mosul would be launched soon. In a TV statement Dec. 28, he said that the mission would be completed in 2016.

However, disagreements between the forces that will be involved in the Mosul liberation continue to prevail in the political scene. This is true particularly since the Arab Sunnis fear the engagement of the peshmerga forces and the predominantly Shiite Popular Mobilization Units in the fighting in Mosul. This fear is understandable since the peshmerga forces represent the Kurds and the Popular Mobilization Units represent the Shiites. Sunni Arabs have warned against the presence of these two forces in Mosul and its surroundings, as the Sunnis fear the repercussions that could occur if Kurdish and Shiite forces enter the city, which has a Sunni majority and other small minorities.

The Sunni-majority Ninevah provincial council voted Feb. 29 to oppose the units’ participation in the battle to liberate Mosul. However, this decision was objected to by the members of the national parliament who represent minority communities in Mosul; Ninevah also includes non-Muslim minorities such as Christians and Shiite-affiliated minorities such as the Shabak and the Turkmens.

These minorities have nothing against the presence of the Popular Mobilization Units in Mosul, as they welcome any force able to liberate them and ensure their survival.

The council has 39 members, the majority of whom are Sunni Arabs and Kurds, and three members representing the minorities. The council’s sessions have been held in Erbil since the fall of Mosul, and the minorities' representatives have not attended the meetings since that time.

On March 17, Abadi defended his decision in a statement issued on the sidelines of a meeting with the units’ leaders, saying, “The Popular Mobilization Units is a state-affiliated institution and any prejudice against it is a prejudice against the state. No party has the right to tell us who will and will not participate in the battle, and no party has the right to ban our citizens from taking part in the liberation of their land.”

In terms of the ground operations, the Popular Mobilization Units’ participation in the battle for Mosul is necessary, given the major losses incurred by the Iraqi army after one-third of Iraq fell into IS hands in 2014. In fact, this battle is one of the biggest and most significant battles against IS, as Mosul is the third-largest Iraqi city and a main stronghold of IS. Retaking Mosul would lead to IS' defeat throughout Iraq.

Hadi al-Ameri, a commander of the units and the Badr Organization, is well aware of the paramount importance of this battle. He said, “Neither the army, nor the police, nor the Hashd [Popular Mobilization Units], nor the tribes can accomplish Mosul on their own. We have to work together as one cohesive team, in coordination also with the [Kurdish] peshmerga forces, to mobilize the whole nation to defeat IS.”

In the same vein, it seems that the United States does not object to the participation of the units in the battle to liberate Mosul. Brett McGurk, US special envoy to the Global Coalition to Counter the Islamic State, said in a March 5 press conference at the US Embassy in Baghdad, “The operation to liberate Mosul, isolating Mosul, is already underway. It will be a mix of forces and it will be very important to ensure it is well planned.” McGurk did not place any red lines on the units' engagement in the battle.

In an interview with the US-based Al-Hurra TV in April, Pentagon spokesman Steve Warren said that the Iraqi government has wisely asked the Iranians to desist from supporting the Popular Mobilization Units fighting on their side.

He said, “The problem [Iranian support to the units] was overcome,” meaning that the United States is satisfied with the current situation and participation of the Popular Mobilization Units in the operations to liberate the various Iraqi territories. It seems that the United States does not object to the participation of the units, but does not want them to be supported by Iran, as it could stir up sectarian strife and delay the elimination of terrorism.

On another note, President Fuad Masum suggested in an interview with IRNA news agency March 16 that the Popular Mobilization Units and peshmerga forces participate in the operations, but do not enter the city, as happened during the liberation of Ramadi.

This proposal does not, however, seem plausible when comparing the two cities, as Ramadi was almost empty of people and is much smaller than Mosul.

Mosul is a major city with a large population, and therefore it requires a greater number of forces to fight IS than was the case in Ramadi. Moreover, the Popular Mobilization Units now include forces comprised of the minorities of Mosul and Ninevah. For instance, the Kata'ib Sayyid al-Shuhada battalions, which is part of the units, includes Shabak fighters, who are part of an important minority in Mosul and neighboring areas. The Shiite Turkmens, hailing from Tal Afar and other parts of Ninevah, have also a significant presence within these units. Based on that, it seems hard to prevent the Popular Mobilization Units from entering areas from which minorities were expelled after IS seized Mosul.

by Ismail BELLAOUALI with Philippe AGRET in Rabat and Marie GIFFARD in Madrid | AFP | Jun 24, 2022
END_OF_DOCUMENT_TOKEN_TO_BE_REPLACED