More than two months after the liberation of Qayyarah from the Islamic State, the oil wells the militants set ablaze continue to blacken the town with toxic smoke. 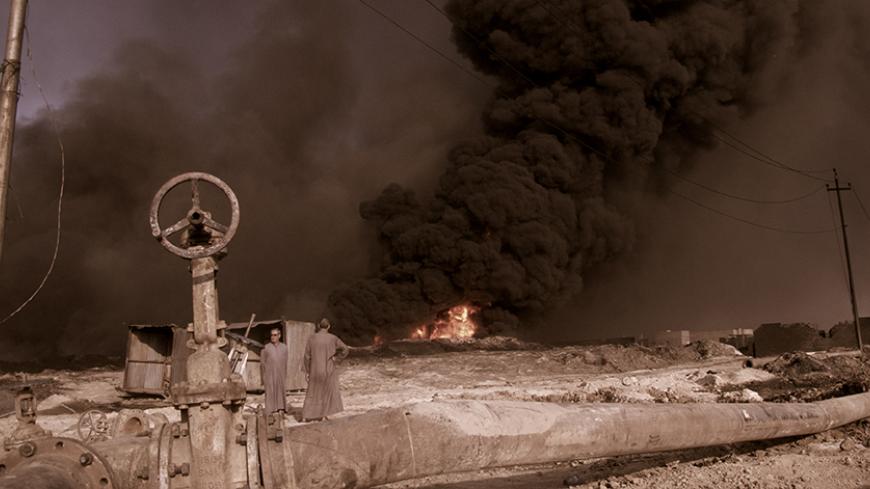 An oil well set alight by the Islamic State near Qayyarah continues to burn months after it was retaken by Iraqi government troops. - Shelly Kittleson

QAYYARAH, Iraq — From the Makhmour military base, the route to Qayyarah crosses the Tigris River via a pontoon bridge that stops service at 6 p.m. and doesn't open again until late morning, after the road has been checked for improvised explosive devices planted overnight.

The town of Qayyarah, located 30 kilometers (18 miles) south of Mosul, and its still-burning oil wells were retaken from the Islamic State by Iraqi troops Aug. 25, after government forces managed to claw back the nearby Qayyarah West Airfield on July 9.

The regaining of the air base about 40 kilometers to the west of town was seen as a key victory in ongoing efforts to take back Mosul. It also enabled control of the road linking Mosul to the IS-held territories of Hawijah and Shirqat.

Months later, after troops entering from the north arrived to the eastern parts of IS-held Mosul on Nov. 1, the sky in Qayyarah continues to be blocked out most days by the billowing, choking black smoke and ubiquitous soot from over a dozen burning oil wells. They were set on fire by the militants as they were pushed back, leaving an environmental disaster and serious health threats to the town's inhabitants.

IS fighters reportedly rigged the wellheads with explosives and then shot them to hide their escape from the aircraft overhead. The blasts destroyed dozens of homes and left many others uninhabitable.

The two main oil fields in the Qayyarah region, Qayyara and Najma, used to produce about 30,000 barrels per day of heavy crude before they were taken over by the jihadi group. IS is thought to have shipped at least 50 tanker truckloads a day to neighboring Syria.

On Al-Monitor's visit to the some of the wells Oct. 29, children could be seen wandering nearby, covered in soot and coughing. A small boy cycled close to the flames, dodging disused hoses, destroyed equipment and puddles of oil. Whether the residents can breathe properly depends on the wind’s speed and direction, one told Al-Monitor.

The United Nations reported that as of Oct. 26, 1,000 people in the area had sought medical assistance for exposure to toxic fumes.

Iraq’s National Oil Company is reportedly working to put out the fires, though Al-Monitor did not see any such presence during its visit.

Meanwhile, alleged IS supporters continue to be arrested in the town and the surrounding area, and distrust hangs heavy in the air.

Upon arriving in the town Oct. 29, Al-Monitor followed a few pickup trucks carrying armed young men in camouflage beating others roughly their age and yelling in seeming jubilation. They took their captives to a makeshift military base in the town, where Col. Zahar Addin al-Jabouri was sitting with the head of a local tribal group, part of the Popular Mobilization Units (PMU). Both groups of young men are from the Jabouri tribe, as is the commander of Ninevah operations, Maj. Gen. Najm al-Jabouri. The mukhtar from the captives' nearby village soon joined them.

The officers allowed a number of journalists to photograph the blindfolded young men and said that they had been picked up based on information from locals about their involvement in IS activities. The colonel said that the mukhtar was one of the best sources of information they had.

The mukhtar is a slim, elderly man in a brown dishdasha who gave his name as Sheikh Abu al-Rawas. Letting himself be photographed, cigarette in hand, he said that he had been providing "information on terrorist activities to the Americans since 2004."

He had stayed throughout the years IS had control of the territory, and said he had been arrested and tortured several times for his son’s involvement in the Iraqi military. He added that he had been forced to watch as another of his sons, an adolescent, was dissolved in acid by the group as punishment.

When asked what he thought should be done with the young men who had been taken upstairs, blindfolded and with their hands tied behind them, he said, "The law must execute them," and added that he knew they were guilty through "sources."

The colonel claimed that the young men had all admitted their guilt, but the local PMU commander — who told Al-Monitor he had been a businessman prior to the war — said that investigations would need to be conducted to see whether they indeed were guilty.

Though the district is predominantly Sunni, there is a heavy presence of government-aligned Shiite armed PMU groups, along with their insignia, Shiite religious slogans and graffiti.

Depictions of Shiite cleric Ayatollah Ali al-Sistani, Iran’s Supreme Leader Ayatollah Ali Khamenei and the Prophet Muhammad's grandson Imam Hussein figure heavily on posters and flags hung at checkpoints and waved from passing military vehicles. Many men from the Shiite-dominant southern regions are here, and some of their brigades stopped to hand out bags of candy to children along the road.

At the last checkpoint on the road before the Qayyarah air base, where American troops are also stationed, the banner of the Shiite PMU-affiliated Asaib Ahl Al-Haq hangs just below that of the Iraqi national flag. Men in blue-and-black police uniforms whooped in support when asked what they think of the militant group, which is known to be also fighting across the border with the Syrian regime against local opposition groups. The PMU are now on the payroll of the Interior Ministry and are playing a key role in recapturing territory from IS in the western axis toward Mosul.

At the pontoon bridge on the evening of Oct. 31, a household appliance floating down the Tigris caused a scare and delays. Security forces rushed to push back journalists and shot at the object in the river to detonate what might have been an ideal container for explosives.

Everything and everyone could be viewed with suspicion here. Meanwhile, the oil wells continue to burn and choke Qayyarah.