Local Iraqi police officers who joined the Popular Mobilization Units to fight the Islamic State seem to have no intention of returning to their old jobs. 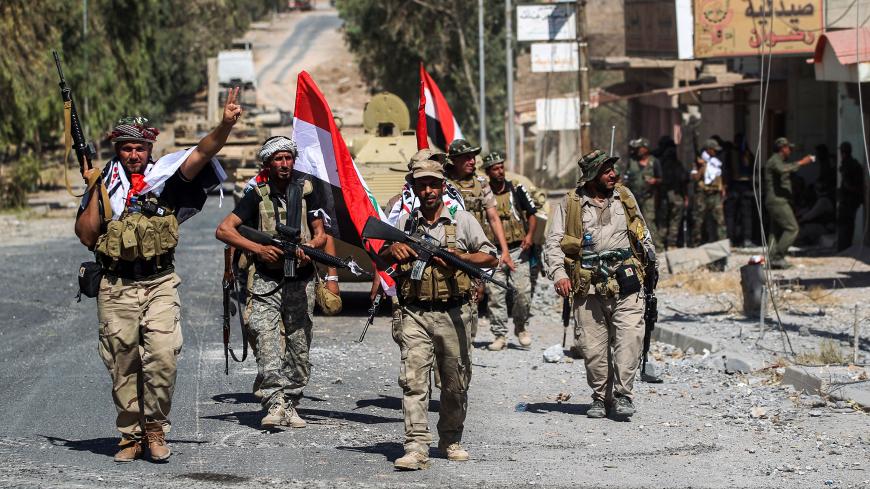 SHIRQAT, Iraq — Along the Tigris River cutting through the town of Shirqat, where attacks from Islamic State fighters occupying the eastern section were frequent until late last year, taillights of vehicles heading to buy bootleg liquor now light up the western bank at dusk.

The eastern side of the city was retaken in late September, roughly a year after the western bank. Recent attacks near Shirqat on the family of a local sheikh and others, however, underscore persisting risk.

Several of the men in the local Sunni-majority Popular Mobilization Units (PMU) told Al-Monitor in an interview at their base that they had left the local police forces to fight under their tribal sheikh. They said they would not go back to being part of the Interior Ministry police forces.

The PMU was incorporated into the national security forces and officially answer to the prime minister’s office, but often much power remains in individual leaders’ hands.

Lt. Col. Salah Hassan Zalit, the deputy commander of the local Brigade 51 — also known as Liwa Salahaddin — told Al-Monitor during a March 31 interview in his headquarters in Shirqat in the north of Salahuddin province that "IS has mostly been defeated." He said the PMU was responsible primarily for providing security at checkpoints outside of cities and conducting anti-IS operations, often in collaboration with PMUs from the south called "when we need them."

The commander mentioned the Shiite-led Jaysh al-Mu’ammal, Harakat Nujaba and Badr as those with whom they had conducted some of the most recent joint anti-IS operations. A large poster of PMU commander Abu Mahdi Al-Mohandes greets visitors to the local PMU’s headquarters.

He stressed that though there are still dangers, especially unexploded ordnance and improvised explosive devices, IS fighters "hiding in the Makhoul and Hamreen mountains come down to get food and we strike them when they do," implying that those with the terrorist group that until last year controlled vast swaths of terrain in the country are now limited to minor attacks and scavenging to stay alive.

Last year, just as the nine-month battle for Mosul was winding down in early July, IS fighters managed to retake the town of Imam Gharbi and cut a key highway between Shirqat and Qayyarah, which houses an air base used by the international anti-IS coalition.

Al-Monitor reported from that front on July 15 at a time when significant terrain was still under the insurgents’ control. The land was retaken July 20 only after a US-trained SWAT team from another province was called in and numerous coalition airstrikes were conducted, pushing IS fighters back to the eastern side of the river, where they would remain until the battle for Hawija in adjacent Kirkuk province in October.

Many US air assets have been moved to Syria and Afghanistan since the end of major operations in Iraq, and "with fewer coalition troops on the ground, Iraqi forces are not getting the large amounts of intelligence they did at the height of the fight against IS," the Associated Press reported late last month.

Security in Shirqat is now under joint control of the police and the local PMU, most of whose fighters are from the dominant Jabouri tribe and answer to Sheikh Asham Subhan Khalaf al-Jabouri.

The sheikh told Al-Monitor in an interview last year that during Saddam Hussein’s regime, he had been in exile in countries that included Syria, the Netherlands and the United States but had chosen to return to Iraq. He said there was a prewar population of 240,000 people in the city and a total of around 4,000 local PMU fighters in Salahuddin province.

In an interview with a number of the fighters March 31, Al-Monitor was told that those who had left the police forces when the PMU was formed now have no intention of returning to their previous jobs.

Battalion commander Anas Malek Subhan al-Ashem said while puffing on a hookah in his office that they are "no longer police" and that they would not go back to being ones even if the government stopped paying PMU salaries: "We are fighters now."

Several of the men under him said that they regularly drank alcohol but referred to themselves as "muhajedeen," laughing at the apparent discordance.

In numerous trips to the front during the nine-month battle to retake Mosul, Al-Monitor stayed on Iraqi federal police bases and traveled with recruits from Baghdad several times. Some of the young ones had previously fought as part of PMUs and only later joined the federal police, while the opposite seems to have occurred in Salahuddin: Many who had been in the police left to join PMUs under a local sheikh.

One local dignitary, Sheikh Wennas al-Jabouri, leads Brigade 88 from al-Alam. His area of control reaches from the eastern bank of the Tigris to the restive Hamreen mountains area south of Shirqat and Iraq’s largest, and heavily damaged, oil refinery in Beiji.

Regional loyalties seem to have shifted significantly in the area, where many former officers and those who translated for US forces in the post-2003 period speak fondly of US support for them in their fight against al-Qaeda but are now looking elsewhere for backing.

Sheikh Wennas told Al-Monitor in an interview in early April that though he had been part of the US-backed "Sahwa" during the fight against al-Qaeda, he no longer trusted the American government. "In the beginning, I asked them for help. But all I got were promises and no action," he said. "Iran helped us immediately."

Another former member of both the police forces and the Sahwa, Husssein Ali Najm al-Jabouri, commands the 56th PMU brigade in Hawija, on the other side of the Hamreen mountains.

Meanwhile, the current interior minister is Qassim al-Araji, who spent years in exile in Iran and is believed to still be close to the Islamic Republic.

"Our leaders know who helped us — whether it was Iran, how much. We don’t care. We just want our families safe, food, services. They will decide what countries to have friendly relations with," PMU battalion commander Ashem said.

Both the families of PMU fighters and those of the police now receive compensation for deaths in battle, one fighter who worked for years as a translator for the US forces said. Asking to be referred to as Omar, he lamented, "The [Iraqi] government only cares about us when we are dead," claiming that the monthly payout for the families of fighters and police who die is higher than the fighters’ salaries when they are alive.

His father ordered all his six sons to join up to avenge an uncle’s death at the hands of IS, he said, claiming that "the vast majority of the work against IS" was done by the PMUs.