IS killings and kidnappings in central Iraq raise questions

The desert area west of Salahuddin and other depopulated areas have faced a spate of kidnappings and killings claimed by the Islamic State. 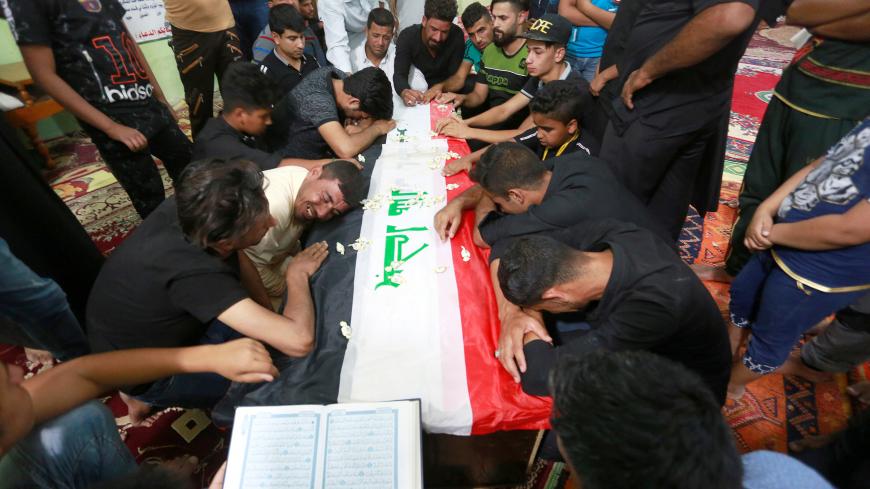 Mourners attend the funeral of the security men who were kidnapped and killed by Islamic State militants, Karbala, Iraq, June 28, 2018. - REUTERS/Alaa al-Marjani

TIKRIT, Iraq — A rash of kidnappings and killings in rural and depopulated areas in Iraq claimed by the Islamic State (IS) have led to debate over whether and where the international terrorist group may attempt resurgence in the country and how best to prevent it.

The finding of six more corpses of kidnapped individuals on June 27 in the Salahuddin province after several similar incidents has meanwhile reinforced speculation that the province may be prone to a budding insurgency for historical, geographical and political reasons.

At least 30 people had reportedly been taken hostage, and seven bodies were found in the northwestern part of the province earlier in the month.

Power lines in Dour and al-Alam were sabotaged by IS on June 26, Al-Monitor was told by a source from the area, and on June 28, the two towns in the province were still without electricity.

Salahuddin, the birthplace of former Iraqi despot Saddam Hussein, is largely Sunni but was assisted greatly by Iran-backed, Shiite-led Popular Mobilization Units (PMU) in taking back their areas from IS. Some of these areas, however, remain under the control of nonlocal PMUs that locals claim are more beholden to Iran than the Iraqi government.

The province flanks the vast desert stretching to the Syrian border to the west — bordering on both the Ninevah province to the north and Anbar below that — the restive, notorious Hamreen Mountains, Kirkuk and Diyala to the east, and Baghdad to the south.

The eastern bank of the province’s town of Shirqat continued to be held by IS for months after Mosul was retaken by the Iraqi security forces, enabling the terrorist group to take back part of Imam Gharbi and other nearby villages in southern Ninevah province in the final throes of Mosul in July 2017.

Weeks were needed for the Iraqi security forces to regain the villages, even with the Salahuddin US-trained SWAT team taking part in the operation, which Al-Monitor reported on from the front.

This reporter later traveled with local police into the Hamreen Mountains on Christmas Day 2017 as they attempted to root out remaining IS cells after victory against IS had officially been declared. The police chief whom Al-Monitor accompanied during that operation and on previous ones in the mountains was killed by a roadside bomb on May 26.

When Al-Monitor entered Hawija — on the opposite side of the Hamreen Mountains from Salahuddin — on the day of its liberation after three years under IS, a mural showing a smiling little girl and boy holding hands hinted at less religious extremism in the city than in places like Aleppo, where all pictorial representations of humans were blacked out, but the violence toward those disagreeing with it was the same.

“It’s because the IS fighters in Hawija were mostly locals,” an inhabitant of nearby al-Alam, who has relatives from villages near Hawija, told Al-Monitor.

The inhabitant of the town, who like others who discussed the nonlocal PMUs in the area did so on condition of anonymity, voiced concern that locals who feel disenfranchised in the area are still prone to recruitment by insurgent groups.

He noted that many of his relatives had been taken by IS due to their affiliation with the Iraqi security forces and are assumed dead, but that the nonlocal armed groups nonetheless tend to see all locals as close to IS.

Preventing inhabitants from returning to their homes has exacerbated the problem. More than a year after it was liberated, for example, the Siniya area west of Baiji, the home to Iraq’s now destroyed but formerly largest oil refinery, is still inhabited only by nonlocal, Shiite-led PMUs, according to the town’s mayor.

Al-Monitor traveled with the nonlocal PMU Jaysh al-Muammal in late March to Siniya and the vast desert area west of Baiji stretching to the Syrian border, where the group holds several outposts.

Jaysh al-Muammal, like many PMUs that existed as armed groups prior to Grand Ayatollah Ali al-Sistani’s fatwa in 2014, was originally a splinter group from Muqtada al-Sadr’s Jaysh al-Mahdi.

Unlike Sadr’s current Saraya al-Salam (Peace Brigades), however, it has fought on the side of the Iran-backed Syrian regime across the border.

During a visit to an outpost in the Siniya area, a field commander from Jaysh al-Muammal spoke to Al-Monitor about his time in the Shiite section of the notorious US-run Camp Bucca prison in the post-2003 period and said that he had fought across the border in Syria as well.

Sabhan Mullah Jihad, a member of the Salahuddin regional council from Siniya and who was deputy chairman of the council between 2009 and 2013, said in an interview with Al-Monitor in Tikrit on June 21 that “there are no major problems with the [nonlocal, Shiite-led] PMUs right now. There were problems before in the beginning, though, with houses being blown up.”

He stressed that the homes had been blown up indiscriminately by nonlocal PMUs, who had not just targeted the families of IS members.

The regional council member added that he had long been advocating for the inhabitants to be allowed to return, but that the counterargument was always that the town was open to the still partially uncleared desert area stretching toward Syria.

Mayor Azzam Tiwaison told Al-Monitor, "We have tried many times to get permission to bring inhabitants back” to Siniya by speaking to "the prime minister’s office, the Defense Ministry, etc.,” but they had not received permission.

A complete lack of services in Siniya is a major problem there, but some local inhabitants now living as internally displaced persons in Tikrit complain more strenuously about nonlocal PMUs not allowing them back. The town was retaken from IS in late 2015.

Siniya is near the area west of Shirqat where at least 30 members of the Shimmari tribe were reportedly taken hostage in mid-June and the corpses of seven were later found.

A call was immediately made by tribal leaders for weapons from the government after the news came out.

There is concern, however, that the constant handing out of weapons to various local groups contains within it the seed of future conflict.

Hisham al-Hashimi, an expert on terrorist groups who works as an adviser to several security departments in the country, told Al-Monitor in an interview in late March that it was important to prevent sleeper cells from operating in rural areas and to concentrate on reducing the authority of local tribes and armed groups while increasing a sense of Iraqi national identity.

As Al-Monitor reported in April, some of those who switched from the police force to the PMU during the war against IS now refuse to go back to the police, preferring a more tribe-oriented group that still enables it to receive a government salary.

The call for more weapons comes just as some of Iraq’s most powerful urge disarmament of nonstate armed groups operating in the country.