IS remains a threat in Iraqi desert, tribal villages 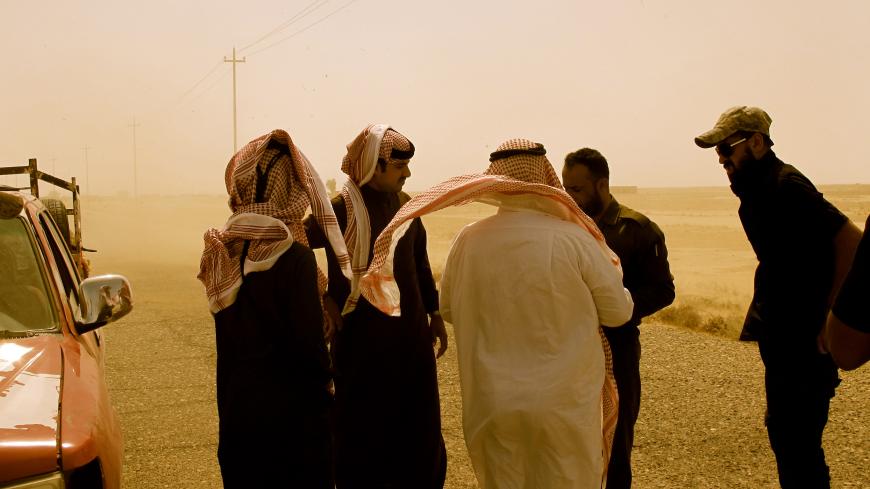 Shimmari tribesmen are stopped along a desert road west of Beiji, Iraq, by non-local Popular Mobilization Units, who say civilians are not allowed on the road for security reasons, July 6, 2018. - Shelly Kittleson

However, "It’s simply too vast of an area" for outposts, said Ahmed al-Debi, head of the PMU Waleed al-Kaaba.

Abu Jaafar, the head of security for the PMU in Salahuddin province, sat down for an interview with Al-Monitor in his office in the provincial capital of Tikrit on July 6. He said he doesn't "trust the anti-IS international coalition. They have the technology to hit a specific window if they want. And they can’t hit cars in the desert?"

Several non-local PMU have operated in the province of Salahuddin, yet it is unclear which PMU remain.

The name references the Kaaba, the sacred site in Mecca toward which Muslims pray. Many PMU use religious symbols or terms in their names.

Waleed al-Kaaba operates only in Siniyah and Sinjar, according to Debi, who wears a bracelet saying, "My blood is not worth more than Hussein’s," in reference to the Prophet Muhammad's grandson who is revered by Shiite Muslims.

An interview with Debi took place in Tikrit's Siniyah district, a predominantly Sunni area that houses a refinery. The inhabitants of the town are not allowed to return, even though Siniyah was retaken from IS years ago.

Farther west is a flat barren expanse and a bridge over a small waterway, where shepherds bring their herds to drink. Then comes the desert, where sand whips one’s face amid scorching temperatures. Bullet casings and other signs from the fight to retake the area litter the ground.

While traveling through the desert with fighters from the PMU, Al-Monitor encountered cars carrying members of the Shimmari tribe. They traveled on a road that "civilians have been prohibited from being on after the recent kidnappings and killings" in an area north of it, a PMU member said.

The PMU stopped the tribesmen and checked them before letting them through "for humanitarian reasons." One of the vehicles transported a pregnant woman who needed medical care.

The PMU took Al-Monitor to sites that they described as former IS schools and hospitals. There were few conclusive signs to show that the buildings had been used by IS, but they contained dusty weaponry made in the former Yugoslavia and the Soviet Union and a large supply of medication, mostly cortisone produced by Syrian pharmaceutical companies in 2016 and 2017. Crude graffiti referencing IS also covered one wall.

Inhabitants have not been allowed back into the Siniyah area, but the town’s refinery has been partially running since 2017, Debi said.

However, oil production and refining "is not my sector. We are simply providing protection. We have been accused of stealing gas and oil," but this is not true, the non-local PMU leader stressed.

In the eastern part of Salahuddin province, many of the Shimmari villages are still unsafe for civilians, said Hilal al-Shimmari, a well-known poet from the tribe who has been engaged in battles in recent months to protect villages near his home in the city of Dour.

He said several IS members in two vehicles took over a school building one night in late June in this area. Hilal said that he and six others fought against IS at the scene, but that the IS fighters had already slipped away before regular Iraqi forces arrived four hours later.

Hilal has been a member of the Dour City Council since 2005, the last time local elections were held, he said.

During an interview, he took out a crumpled sheet of paper listing the names of six Shimmari villages in his area that had been fully secured and over 20 others that had not.

He said that a non-local PMU had taken 47 innocent men from his tribe on March 8, 2015, shortly after the liberation of the area, and that they had not been heard from since. Though he reached out to the government for help, the government responded that it did not know the whereabouts of the men. Hilal said it was possible they were arrested by Kataeb Hezbollah or Asaib Ahl al-Haq, but he was unsure.

Though he has an "old Kalashnikov" he uses when traveling in a convoy responding to calls for help, he said he cannot travel alone through checkpoints with the weapon because it would be confiscated. He and his fellow tribesmen need official permission to carry weapons, he said, especially after recent incidents, noting that IS and al-Qaeda consider villages and rural areas prime targets.

In June, IS executed seven shepherds in a nearby area. The shepherds had found IS weapons caches in the desert and informed the PMU. Once IS heard of their actions, it targeted the men.

Recent operations by security forces seek to root out remaining IS sleeper cells in Salahuddin, Kirkuk and Diyala, but several security sources told Al-Monitor that the nearby Hamrin Mountains and the desert will likely continue to provide refuge for some insurgents for the time being.