As the Syrian Democratic Forces pull out of positions along the Syrian-Iraqi border and civilians return to the nearby town of Qaim, several remaining security forces are coordinating to maintain the peace. 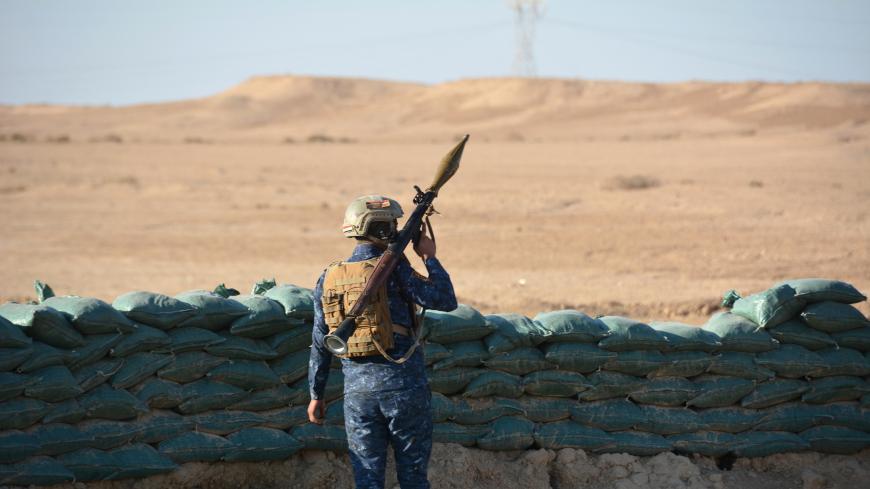 QAIM, Iraq — Though no major attacks have occurred in months in the border town of Qaim, which was retaken from the Islamic State (IS) in early November 2017, there have been several reports of the militant group's vehicles and fighters entering Iraq through the country’s porous western desert border with Syria.

In a Feb. 14 interview at the Husaybeh border crossing, Lt. Col. Aqeel Adnan from the Iraqi Army’s 8th Division told Al-Monitor that some IS fighters are still across the border in Soussa and Hejin, but they are confined to an area of some 60-70 square kilometers (23-27 square miles).

"The [Syrian Defense Forces] are north of the river, and the Syrian regime is south of it," he noted, saying that he was aware of the SDF withdrawing from several border positions to move toward the northwestern parts of the territory that it's held since the start of the Afrin offensive. He denied knowledge of any non-local Popular Mobilization Units (PMU) in the town of Qaim or across the border.

Several civilians and members of the security forces confirmed to Al-Monitor that non-local PMUs are still in the city. The Asaib Ahl al-Haq flags that had lined the main bridge into the city for weeks after its liberation from IS are gone, but multiple sources say that various non-local PMU factions are in the town and not just south of it in Akashat and near the phosphate mines.

In local police chief Gen. Ayad Ahmad Hamid’s office, Al-Monitor was told the first phone call of the day Hamid received was from a member of the Tufuf PMU asking to meet with him at the group's headquarters in the city.

A meeting was held Feb. 18 between tribal leaders, the army and some members of local PMUs to coordinate a joint demand that the non-local PMUs leave, according to two different security forces on the ground who spoke on condition of anonymity.

Al-Monitor spoke to the head of the local Liwa Aaly al-Furat (Upper Euphrates Regiment) PMU, Col. Moussa Hamad Karbouly, a former police intelligence officer from Qaim. He said in a Feb. 14 interview in the city that some of the non-local PMUs "such as Kataeb Hezbollah and Harakat Nujaba are problems because they are in conflict with the US and the coalition forces. We are afraid that there might be a battle between them here" if they were to stay, he said, adding that there was no reason for them to be there any longer.

Liwa Aaly al-Furat was trained by Danish special forces at the Ain Al-Asad air base in Anbar, has members from several local tribes and is led by the son of a Karbouly tribal sheikh who died at the hands of relatives who had joined al-Qaeda in Iraq. It worked alongside the Iraqi army to retake several cities in the province from IS as well as the border area.

The local PMU now clears homes of explosives and monitors the area from several border positions in the Iraqi Bagouz area north of the Euphrates River, across from sections of Syrian territory held by IS and from border positions recently withdrawn from by the SDF.

Meanwhile, a local 19-member SWAT team has recently received training in Ramadi from Spanish forces, its new commander told Al-Monitor. The team consists mostly of former SWAT members who fought with the local Kataeb al-Hamza PMU during anti-IS operations. There is a plan to raise their number to 31, according to Anbar regional police chief, Maj. Gen. Hadi Rizej Kessar.

They were formerly led by Col. Rabaa, also known as Abu Aya, who until recently received a salary from the Interior Ministry as head of the local SWAT team while also acting as head of Kataeb al-Hamza.

Abu Aya left the position of local SWAT team commander "about a week ago," the current head, Jassim Mohamed, said in a Feb. 14 interview at the headquarters in Qaim, a fresh coat of pink paint on the interior walls and Turkish brand names still stickered across the frames of imported doors and windows.

The headquarters is along the main road running through the city, not far from where a bright white wall bears in red letters, "Al-Qaim intelligence and counterterrorism unit."

Abu Aya told Al-Monitor in an interview that he had refused to go to the 20-day training course in Ramadi because he did not feel he could leave at such a precarious time. He said intelligence that had prevented several recent attacks in the city had come from his men.

When asked about Abu Aya, the police chief called him a hero.

Security sources working in the border area had told Al-Monitor that members of his PMU engaged in extrajudicial killings of individuals they said were affiliated with IS in mid-December. Abu Aya denied the allegations.

Two women from the same tribe as most of its fighters — Albu Mahal — were reportedly killed in late February by other members of the tribe, who allegedly accused the women of having links to IS, according to the same security forces. The killings took place in the Saada area, where Al-Monitor was told the non-local PMUs have a base.

Women wearing black abayas and niqabs can be seen in the main streets of Qaim again, fruit and bread shops are open in various areas, and children sell small perfume bottles in the market and cycle down the main road. Schools are open again.

Many buildings have been destroyed and some have still not been cleared of unexploded ordnance, but "over 13,000 families" had returned to the town as of Feb. 12, said Hamid. Security is currently good, he said, but close coordination between all the various forces on the ground is essential to keep it that way.