As the second phase of the operation to retake the last major pocket of territory held by the Islamic State across the border continues, local Iraqi forces in the western Anbar city of Qaim are wary but hopeful that some of their disappeared may soon be found. 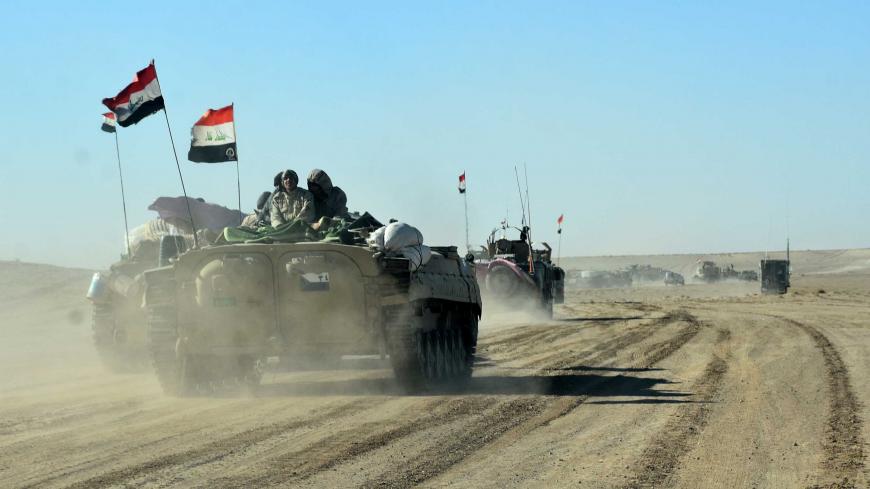 Members of the Iraqi forces and the Popular Mobilization Units ride on infantry-fighting vehicles near the Iraqi-Syrian border, about 50 miles west of the border town of Qaim, Iraq, Dec. 9, 2017. - STRINGER/AFP/Getty Images

ERBIL, Iraq — Iraq has launched the second phase of the operation to retake the last major pocket of territory held by the Islamic State (IS) across the border from the western Anbar city of Qaim.

The international anti-IS coalition, Kurdish-led Syrian Democratic Forces (SDF) and Iraqi forces are all collaborating in the operation.

"Last week, the SDF finished the first phase of Operation Roundup, which culminated in the clearance of Baghuz, the southeastern-most village along the Middle Euphrates River Valley near the Syria-Iraq border," Col. Sean Ryan, US spokesman for the anti-IS coalition, told Al-Monitor on May 30 in an email exchange.

He noted that the "operation has demonstrated effective coordination with the Iraqi Security Forces on the other side of the border."

There are concerns, however, that the offensive may lead to some IS fighters fleeing into Iraq and that — once the fight against IS is over — tensions between groups that have hitherto collaborated may result in armed conflict.

Meanwhile, some believe that many individuals taken prisoner by IS during the group's time in Qaim may still be detained in Hejin.

The head of one of the two main Popular Mobilization Units (PMU) in the town of Qaim, a former police intelligence officer named Col. Moussa Hamad al-Karbouly, told Al-Monitor that, during the liberation of his city, "some of the population as well as IS families fled. Prisoners that had been held there were taken with them" across the border into eastern Syria.

Karbouly is the head of Liwa Aaly al-Furat, a local PMU trained by the Danish special forces that was instrumental in retaking Qaim from IS.

"We have a list of 1,730 people from the city who disappeared at that point," he said. "Some of the prisoners had been in the Iraqi army, the police, the Anbar Awakening or were tribal figures who refused to pledge allegiance to [IS leader] Abu Bakr al-Baghdadi."

The leader of the other major local PMU, known as Abu Aya, has told Al-Monitor on multiple reporting trips to the city in recent months and in Whatsapp conversations that large numbers of Iraqis and Syrians are still being held in prisons there.

"According to the information we have, they are in Hejin in underground prisons," Karbouly said. "There's unconfirmed information that there are a total of 4,000 prisoners from Iraq and Syria. A month and a half ago one person got out of one of the prisons and is now in Qaim. He has said there are 70 to 80 people in each hall, all in the same area. He said that there is a large number of prisoners and they are extremely thin due to malnutrition."

He added that he had received information that near Hejin "there was previously a secret prison for [Syrian President Bashar] al-Assad's Palestine Branch [military intelligence]," which is where they may be held.

Meanwhile, residents of the border town who returned from internal displacement are finding it difficult to cope with high unemployment and a lack of basic services.

Al-Monitor traveled to Erbil to meet with Karbouly, who was on leave to visit his family for a few days during Ramadan. Like many from Qaim, he is hesitant to take his family back before there is reliable electricity, running water and other services.

He said that about 110,000 internally displaced persons originally from Qaim had returned to the city since it was liberated on Nov. 3, but that many of them had left during Ramadan to Erbil and Baghdad and they might not go back until basic services are restored.

The dire lack of employment in the area is a serious issue, he noted, since daily commuting to any other urban center is impossible due to the long distances and that "the area is an agricultural one, not one in which many are on the government payrolls."

The local PMU leader also expressed concern about potential future conflict, both between the Arabs and the Kurds across the border and between the local Sunni PMUs and non-local Shiite-dominant ones in his area.

The governor of the Sunni-majority Anbar province, Mohamed al-Halbusi, told this reporter in an interview in January that he had instructed his point of contact with the non-local, Shiite-dominant PMUs earlier that month to "send them a message. They must go home. We don't like the message that we are under their control."

If "Abu Mahdi al-Muhandis would like to come to Anbar, I will hold a meeting with him. I will tell him 'thank you, now take your men,'" he said, in referring to the PMU deputy chief and head of the Kataib Hezbollah faction.

However, both the local PMU leaders and other sources who have been to the area in recent weeks confirmed to Al-Monitor that the non-local PMUs are still in the city and refuse to leave.

North of Qaim, in the vast area west of Baiji and stretching to the Syrian border, there are also many non-local PMUs, as well as south of it in Akashat.

Tensions between Kurds and Arabs on other side of the border may also prove to be a serious issue once anti-IS operations end entirely.

"Now battles are taking place near the Iraqi-Syrian border. We, as Iraqi security forces, including both the 8th division of the Iraqi army and the local PMUs, don't have orders to enter into Syria" to fight IS, Karbouly said. "We only provide covering fire from the border using artillery and mortars and evacuate the wounded."

Small contingents of forces from Denmark, Norway and the United States continue to be stationed in Qaim but have tightly restricted movement in the area, Al-Monitor was told, and do not seem to have any intention of staying for the long term.

The mix of forces has strong reasons to work together at the moment. However, concerns remain about what will happen when their common enemy ceases to be a threat.