What next for PMU in Iraq's Anbar province?

The flags of a powerful Shiite fighting force still fly from the main bridge into the Iraqi border town of Qaim weeks after it was retaken from the Islamic State. 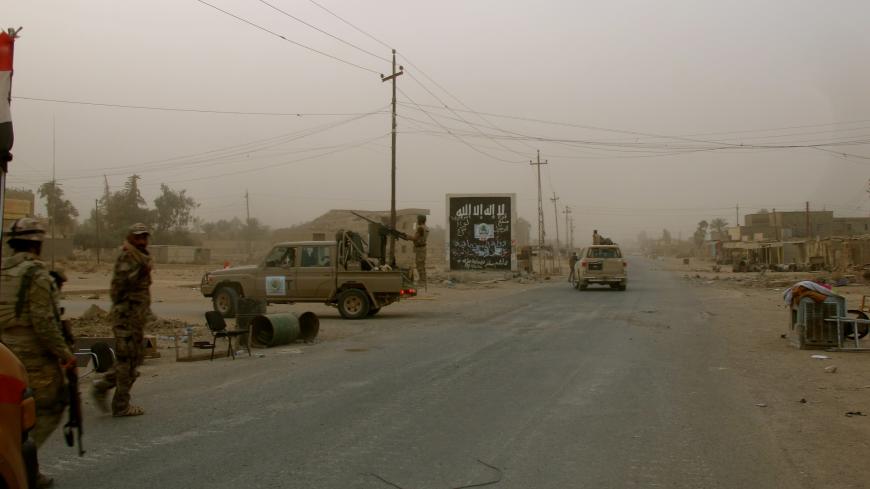 QAIM, Iraq — Flags of Iran-backed Asaib Ahl al-Haq (League of the Righteous) — with their distinctive arm thrusting a gun upward over a green Iraq against a white background, a strip of red and a Quran below — fluttered at the checkpoint into Qaim, above a dusty, barren wadi below. When Al-Monitor visited the area Nov. 6, the checkpoint was manned by Asaib Ahl al-Haq fighters and members of the fellow Popular Mobilization Units (PMU) militia Kataib Hezbollah, also long backed by Iran and a part of which continues to fight on the Syrian side of the border alongside the Syrian regime.

Referring to the capture of the Karableh and Saada areas of Qaim from the Islamic State (IS), Col. Moussa Hamad al-Karbouly told Al-Monitor in Karableh, “PMU fighters from the south were the first to enter.” Karbouly leads the local Sunni PMU force, Liwa Aaly al-Furat (Upper Euphrates Regiment). Many local forces in the area have taken to using the terms “main PMU,” “southern PMU” and “Shiite PMU” to distinguish among outside paramilitary groups and local fighters, who are often somewhat inappropriately referred to as “tribal forces.”

Aaly al-Furat has members from several different tribes and receives monthly salaries from the Baghdad government, as do other PMU factions. It does not answer to any tribal leader, although it does maintain good relations with the various sheikhs in the area. Anbar province is a predominantly Sunni region, and tribal traditions and links are strong.

Aaly al-Furat has 500 men, who were trained by Danish Special Forces at the al-Asad air base farther east, also in Anbar, and equipped by the United States, Karbouly said. Other local forces have received training from the international coalition as well, while many non-local PMU forces have received support from Iran and Iranian advisers. Attempts to identify the vast number of Shiite and Sunni PMU forces in terms of brigade numbers designated by the PMU Commission have thus far resulted in more confusion than clarity.

Karbouly said IS lost Karableh and Saada to the primarily southern, Shiite PMU forces: Kataib Hezbollah, the Imam Ali Brigade, the Abbas Division, Asaib Ahl al-Haq and the Ali Akhbar Brigade. While these southern PMU factions took control of the two areas near a damaged but accessible bridge over the Euphrates River that would later be used for the subsequent Rawa operation, Aaly al-Furat fought alongside the army to retake the T1 area, some 25 miles southeast of Qaim, phosphates facilities and then the border area of Husaybah.

Karbouly fought alongside Col. Ali Fendi, an Iraqi army commander of the 28th Brigade's 1st Regiment and with whom he had worked for many months on previous operations in the Anbar cities of Sagra and Anah.

On Nov. 6, three days after Qaim was declared retaken, Karbouly said he was disappointed that his group had not been designated to be the first to enter his native Karableh, because, he believes, it would have fostered greater trust among the civilians, most of whom had left for internally displaced persons camps or to elsewhere, where they would be screened prior to being allowed back into the city.

Aaly al-Furat entered Karableh only after it was taken. Karbouly said his main priority was to check homes for possible improvised explosive devices and booby-traps, a major danger in IS areas that in some places has led to more deaths than the fighting itself. Asaib Ahl al-Haq had retaken the area and set up checkpoints, but had not bothered to clear the homes of explosives, Karbouly said. Asked whether problems had arisen with Asaib Ahl al-Haq, Karbouly told Al-Monitor, “We haven’t had any problems with them, yet. So long as they leave.”

Non-local PMU forces left prior to the subsequent operation that began Nov. 11 to retake Rawa, the last IS-held town in Iraq, Lt. Gen. Qassem Mohammedi, the head of the Jazeera Operations Command, told Al-Monitor on a nearby desert front Nov. 14, roughly a week after Al-Monitor’s first meeting with Karbouly in liberated Qaim. Later that day, Karbouly said in an interview at a temporary base his forces were using in Karableh that a number of non-local PMU forces were still there, but that Asaib Ahl al-Haq had “gone back to Baghdad.”

Several Asaib Ahl al-Haq flags, insignia and graffiti still covered the walls throughout the Karableh district and its still mostly uninhabited streets. According to Karbouly, only 10 families had remained in the area. Only a few dozen more had returned by mid-November.

Aaly al-Furat has taken part in all the major battles in western Anbar since receiving training and weapons. In late September, just after the Iraqi army and local PMU forces retook the city of Anah, Karbouly had told Al-Monitor, “When I met with Prime Minister Haider al-Abadi in July, he told us that his intention was to have the tribal forces on the front line [during the fight to win back the western Anbar].”

As for the battle for Anah, Karbouly said, “Even the Norwegian, Danish and US special forces were 500 meters [0.3 miles] behind us. The Iraqi army and local PMU forces were on the front line. There were no non-local PMU forces or Counterterrorism Services involved.”

Anah, about 62 miles east of Qaim, became the base where many of the officers involved in the Qaim battle would meet, sleep and use the internet, in part because it was the only place in the area that got cellphone reception. It is considered one of the safer parts of western Anbar. Al-Monitor's reporter spent the nights of Nov. 13-14 with local families in the city.

Aaly al-Furat searched about half the city of Anah, Karbouly said. “[Initially,] some 250 vehicles of Anbar tribal forces from all areas and over 1,000 men [from local PMU forces had taken part],” he said. “But Lt. Gen. Qassam Mohammedi expelled the others from the city after there were some cases of theft. Also, we were afraid acts of revenge might be carried out on the population, which had just been under IS for over three years.”

He voiced special concern about possible transgressions by fighters from Haditha, a nearby city that lost many fighters and civilians during a lengthy siege but never fell to IS. Due to tribal traditions, revenge is sometimes exacted on the relatives of those who killed if the killers themselves cannot be found.

“Parts of the Iraqi army’s 7th Division and Aaly al-Furat then took control of security for the city,” Karbouly said. “We built a good relationship with the population. The civilians were very helpful because we gave them security, but they were scared. IS had told them that we were all Shiites and that we would kill them and ‘take their women.’ So when we went to their homes, we introduced ourselves. We gave our full names, said where we were from. We used local fighters to liberate their own areas.”

This then resulted in better intelligence about IS — where they had been, who had been with them, and so forth, said Karbouly, who had worked as a police officer in Qaim prior to the IS takeover of the city. This did not happen in his own area, he said, as Mohammedi had told him that they “didn’t need them” there. Some officers who spoke to Al-Monitor on condition of anonymity said the decision was instead most likely made by the international coalition, which wanted the nonlocal forces they had trained to take the strategic area near the border.