Iraqi security forces launched an offensive in Anbar province in early September to cleanse the key Islamic State-held town of Qaim on the Syrian border. 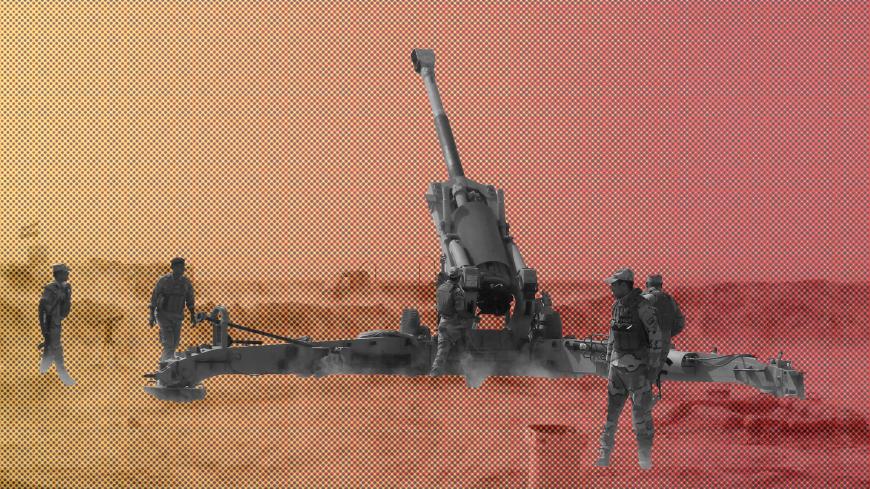 Iraqi forces fire preliminary shells from the area of al-Sakrah during a military operation to push out the Islamic State from a nearby village in Anbar province, Iraq, Sept. 12, 2017. - MOADH AL-DULAIMI/AFP/Getty Images

Iraqi security forces have moved toward the key Islamic State-held town of Qaim on the Syrian border, meeting with scant resistance. The operation is ongoing, and they will likely clear the remaining IS-held areas in Anbar province, Iraq’s largest, in the near future.

Moving northward from Rutba, the Iraqi army, police and Popular Mobilization Units (PMU) successfully retook part of a key highway and the small phosphate-rich mining town of Akashat on Sept. 16.

A few days later, Iraqi security forces and groups of local tribal fighters being trained by international coalition troops at the nearby Ain al-Asad base — where British, US and Danish military are stationed — began pushing westward toward the towns of Anah, Rawa and Qaim along the Euphrates River on Sept. 19.

Al-Monitor spoke to the officer in charge of Mohammedi, a gateway town to the Badiya and Jazeera area of operations of western Anbar, on Sept. 18.

Lt. Col. Abd Hussein noted that the town, which has fewer sleeper cell attacks than nearby Hit, “is less dangerous and easier to manage than some in the region due to its tribal homogeneity,” since almost all of the inhabitants from the town are from the Albu Mahal tribe.

Many of the members of the tribe who fled IS-held Qaim came to Mohammedi and are being housed with distant relatives. One tribe member, a former bulldozer driver who is close friends with many of the local dignitaries in the town, expressed concern to Al-Monitor about what will happen after his native town along the Syrian border is retaken.

“If Iran gets a direct route through Iraq to Lebanon and Syria that goes through Qaim, this will be a very big problem,” he said.

Hussein said that the worst area he and fellow security forces had to deal with in the border town of Qaim in 2006 was the Obeidi area, which was heavily populated by members of the Albu Mahal tribe.

The complexity of navigating tribal affiliations is well-known to anyone who has worked in Iraq’s western regions or Syria’s eastern ones. Al-Qaeda in Iraq (AQI) and IS have long used grievances between tribes to garner support and allegiance in exchange for help, including between Qaim’s two largest tribes: Karabila and Albu Mahal.

Hussein, originally from Baghdad’s Shiite-dominant Sadr City, was stationed in Qaim in 2006 to fight IS’ progenitor, AQI.

In the northern axis of the operation toward the border, no non-local PMUs are involved in the fighting.

Various units in the southern operation that recently took Akashat, however, reportedly include Asaib Ahl al-Haq, Al-Monitor was told by a Counterterrorism Services officer on condition of anonymity.

Asaib Ahl al-Haq, which has been heavily supported by Iran since its creation in 2006, has been criticized for acting as a proxy force for Iran and for alleged extrajudicial killings both before and throughout the ongoing fight against IS. Between 2006 and 2011, the group claimed responsibility for over 6,000 attacks on US forces.

The group has been fighting opposition groups in Syria alongside the Bashar al-Assad regime since 2011 and worked alongside Kata’ib Hezbollah to form Harakat Hezbollah al-Nujaba, a “front organization used to channel [Asaib Ahl al-Haq] and [Kata’ib Hezbollah] fighters into Syria,” according to the Mapping Militants Project.

Iraqi security and terrorism analyst Hisham al-Hashimi told Al-Monitor in an interview in Baghdad that he did not expect the battle on the Iraqi side of the border to be difficult.

He added that many of those who collaborated in some capacity with IS would likely be “reintegrated into the community,” and that “the only IS members who will not be pardoned are the fighters, commanders and members of IS media.”

“In reality, in Ninevah [the province in which Mosul is located], the Iraqi government didn’t hold those involved in IS administration and logistics responsible” for IS crimes, he said. “Only if they pledged allegiance and used weapons, or were media workers who filmed battles and produced propaganda” are they being held responsible.

A former fisherman originally from Anah, who spent over a year in the town after IS took control of it, told Al-Monitor that many in the town had effectively welcomed the arrival of IS. He fled after he was taken across the border and tortured for several months in a prison in the Syrian city of Abu Kamal on accusations of selling cigarettes.

The man fled after being granted leave from IS offices to visit his wife’s family in Hit, which was also occupied by IS at the time. He then paid a smuggler to get him to Baghdad.

Hashimi added that there are “at least 8,000 fighters in Wilayat al-Furat,” the IS administrative district spanning both sides of the Iraqi-Syrian border, and there are “fighters and equipment similar to what they had in Mosul.” However, the reports of IS fighters fleeing to Iraq across the Deir ez-Zor desert after being evacuated from western Syria as part of an agreement with the Lebanese Shiite Hezbollah, which fights alongside the Syrian regime, were inaccurate.

He noted that, in any case, “defeated fighters, such as those from Qalamoun, cannot spearhead new fights,” according to IS practices. “They are automatically moved to logistics and administrative positions.”

The Iraqi security forces’ push toward Qaim has come at the same time as US-backed, Kurdish-led Syrian Democratic Forces and the Russian-backed Syrian regime and allied militias, most of which are funded by Iran, seem to be competing to gain territory across the border in IS-held areas of Syria’s easternmost, oil-rich Deir ez-Zor region.

Baghdad-based former air force pilot and strategy analyst Ahmed Sharifi told Al-Monitor that the fight to “restore the border” between Syria and Iraq was a major strategic aim of the fight to retake the cities in western Anbar province.

This is not only to ensure that supply lines from IS-held territory in Syria are severed, he stressed, but also because “IS followed a strategy of breaking the borders of nation states and establishing its own wilayat."

Restoring this key border, after it effectively had not existed for the past three years, is a way to achieve both symbolic and practical objectives, he said.

The ignoring of the same border by Iran-backed Iraqi paramilitary groups operating on both sides of it may, however, nullify at least some of these hard-won objectives.