With the liberation of the city of Qaim, along Iraq’s westernmost border with Syria, IS has been eliminated almost completely from Iraqi territory. 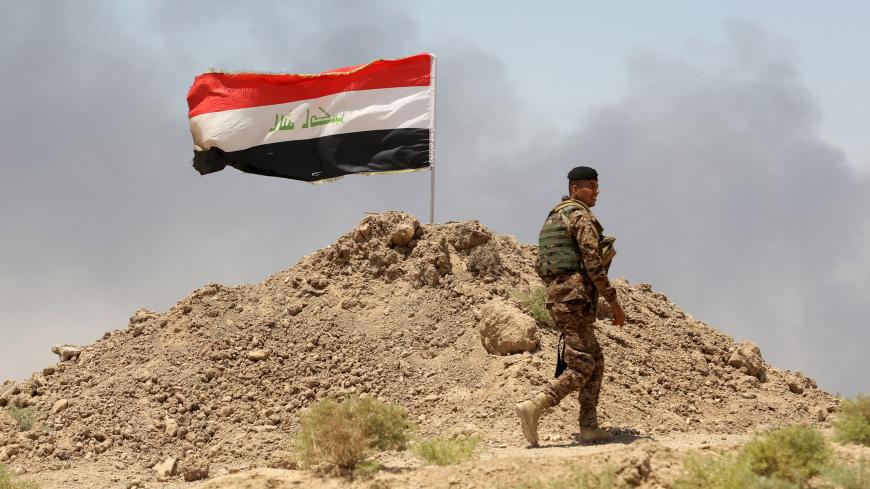 A soldier walks past an Iraqi flag in Husaybah, near Ramadi in Anbar province, July 22, 2015. On Nov. 3, 2017, Iraqi security forces and local tribal fighters also raised the Iraqi flag when they liberated the western border city of Qaim, also in Anbar province. - REUTERS

QAIM, Iraq — Iraqi Prime Minister Haider al-Abadi raised the Iraqi flag Nov. 5 after climbing a sandy berm from which Islamic State (IS) flags could be seen about 200 meters (656 feet) away on the Syrian side of the border.

Al-Monitor’s reporter was the only Western journalist reporting from the border area at Qaim with the Iraqi forces in the first few days after the town's liberation, according to several officers on the front. No Western media were present during the actual operation, they said, during which access to even the surrounding area was severely restricted.

The city of Qaim, along Iraq’s westernmost edge, was proclaimed liberated Nov. 3, even though some of the nearby areas were not cleared until the following day.

Al-Monitor saw no civilians in the central areas or near the Syrian border while driving through the dusty, heavily damaged wasteland of Qaim’s streets Nov. 5. In the days following the liberation, Al-Monitor visited the only three families said to have remained in one area of the city.

A Nov. 6 sandstorm covered Qaim with a copper-colored layer of dust, severely limiting the visibility in the town and along the entire road toward it from the Jazeera operations headquarters in Haditha, roughly 150 kilometers (93 miles) away along a road torn up by improvised explosive devices (IEDs) that dips through wadis and passes by destroyed bridges.

A long string of knocked-down electricity transmission towers, still seemingly fully intact otherwise, can be seen from the road. There is no cellphone reception of any kind in the area. Frequent firing could be heard from the Iraqi side of the border at Qaim toward al-Bukamal in Syria on Nov. 6.

One officer near the Husaybah border crossing at Qaim told Al-Monitor, "It is normal — they are still shooting at us from over there," while another, tasked with accompanying Al-Monitor, said, "They are just testing their weapons. It is not actually fighting."

An officer and soldiers deployed in the area told Al-Monitor that numerous mortar shells were still being fired at Iraqi frontline positions from across the border in the days following the victory announcement. No mortar attacks occurred while the reporter was in the area.

Col. Ali Fendi, an Iraqi army commander of the 28th Brigade's 1st Regiment, told Al-Monitor, "But none of our men have been injured [in the cross-border mortar attacks]. We have been fighting IS for many years. We know how they operate."

The troops were stationed at a home with a damaged satellite dish on the roof, despite IS having banned these. Syrian territory could be seen from the roof through binoculars.

The border city, inhabited only in the past century, lies in an area of highly fertile land alongside the Euphrates River and is strategic for several reasons. It was where Iraq reportedly extracted uranium for its nuclear weapons program in the 1980s, though the site was destroyed by bombings in 1991. A compound continued to produce fertilizer using phosphates from the nearby Akashat mine in subsequent years.

Prior to the IS invasion, Qaim had an estimated population of 150,000 and was long seen as a major entry point for foreign fighters into Iraq from Syria during prior insurgency movements.

Shortly after the city’s liberation Nov. 3, IS drones dropped a bomb on a local Sunni force fighting alongside the Iraqi army, killing one fighter as he was getting out of an armored vehicle and injuring several others.

Fendi told Al-Monitor on Nov. 6 that eight IS drones had attacked the Iraqi joint forces but that international coalition forces had managed to thwart subsequent attempts by conducting surveillance and destroying the drones via airstrikes in Syria.

In the nearby Obeidi district, mostly inhabited by the Albu Mahal tribe and located farther east along the road toward the now-besieged and IS-held town of Rawa and the recently liberated city of Anah, Col. Ali al-Jabouri told Al-Monitor that four suicide bombers had been discovered Nov. 6 just as they were about to carry out attacks. Three were reportedly killed and one was injured.

An officer who had been in charge of Qaim and the surrounding area in 2006, when there was a heavy al-Qaeda presence, told Al-Monitor in an interview in September that the Obeidi district was the most difficult for his forces to deal with.

Parliamentarian Adel al-Mahalawi, who lives in Mohammedi but is from the powerful Albu Mahal tribe, visited Obeidi on Nov. 5. In between meeting with a number of local dignitaries and public officials who had spent years outside the area while IS was in control, he told Al-Monitor that he felt the most urgent issue to be addressed in the area was access to education, if Iraq wanted to avoid similar catastrophes in the future. Children whose families had been unable or unwilling to pay smugglers to get them out of the area have not attended schools for several years.

The entire area south of the Euphrates River to the Syrian border, including Qaim, has now been liberated by Iraqi forces working in tandem with coalition airstrikes, while parts of the desert area north of the river and the town of Rawa are still under IS control.

The clearing of Rawa is not expected to pose major difficulties, Fendi said, adding that it was mostly a matter of clearing IEDs around the city to enable troops to access it safely.

Staff Brig. Gen. Qutaiba Muwafiq Asaad, interviewed by Al-Monitor in the Obeidi area, said his troops were ready, whenever the decision comes.

Whether the area is left ripe for any IS remnants to put down roots and what happens on the other side of the border — where US-backed Syrian Democratic Forces have been racing the Syrian regime and its allied militias, many of them foreign and Iran-backed, to take over the remaining bits of land there under IS control — will determine what comes next.