Following the introduction of a new electoral law and with many of the region’s population still looking more toward their tribes for protection than the central government, Iraq’s Sunni-dominant Anbar province is likely to be highly affected by tribal relations and figures in the October elections. 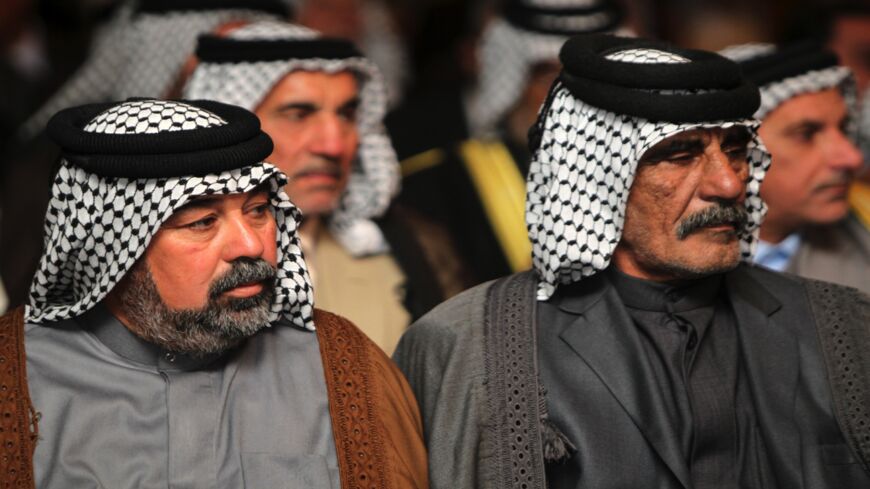 Iraqis attend a conference gathering Shiite and Sunni tribal leaders and clerics on November 8, 2014, in the capital, Baghdad, to discuss support to Sunni tribes in their fight against the Islamist State (IS) in Anbar province, west of Baghdad. - AHMAD AL-RUBAYE/AFP via Getty Images

AL-OBEIDI, Iraq — Sheikh Sabah’s face showed signs of weariness that became more marked as the evening wore on, as members of his tribe arrived to request assistance.

Tribal leaders serve as mediators and advocates for their tribal brethren toward other tribes, security forces and the government. In the western part of Iraq’s westernmost province, they are often the first port of call for those in need.

In return, there is to some extent an implicit expectation that those they back in elections will be supported by members of their tribe as well.

The foremost sheikh of the Albu Mahal tribe, one of the largest in the Qaim district along the Syrian border, told Al-Monitor during a visit to his home in early April that parliamentary elections slated for October 10 would see a “a lot of new faces from Anbar,” as the population wants more focus on and funds for the western part of the province.

According to a new election law passed Dec. 24, 2019, and ratified 11 months later, there will be 83 electoral districts this time.

This sharply diverges from the single electoral district in the 2005 elections — the first after the 2003 invasion — and the treating of each of Iraq’s 18 regions as individual electoral districts, as was the case in the three subsequent ones.

The change came after the massive government protests that brought down the previous government in late 2019 and was intended to reduce a “monopoly of power” held by political parties.

“It will not be only [Mohammad al-] Karbouli and [Mohamed al-] Halbusi” in the coming elections, Sheikh Sabah said in reference to a prominent parliament member from a rival tribe and the parliament speaker from the town of Garma near Fallujah in eastern Anbar.

Halbusi holds the highest position that an Iraqi Sunni politician is seen as being able to aspire to in Iraq, as the country’s president has since 2005 always been Kurdish, the prime minister Shia and the parliament speaker Sunni.

He is widely credited with helping to bring some improvements to Anbar. But here in the western part of Iraq’s largest region — encompassing a massive part of the country’s territory but mostly desert outside of the Euphrates River Valley — some say that almost no money has been used to help reconstruct the war-damaged region outside of the eastern section closest to Baghdad.

During his time as regional governor, Halbusi focused on a number of issues that had long plagued his region’s population, such as previously expensive and exhausting waiting times at the Suqour checkpoint between Fallujah and Baghdad. Since he became parliamentary speaker, significant investment seems to have flowed to at least the eastern part of the region.

“We have seen small groups of politicians from the region grow wealthy, and they are always the same people,” Sheikh Sabah claimed, stressing that there is a great deal of poverty and joblessness in the western part of the province and that this is not being addressed properly.

The leader of the Albu Mahal tribe said his son Harith plans to run as an independent in the elections slated for October.

Sheikh Rabaa from the Karabla tribe, the other largest tribe in the Qaim area, told Al-Monitor in a WhatsApp message on April 19 that it was true that tribal affiliation heavily influenced voting in the region.

He added that “in most cases, candidates are chosen from the same tribe even if they are not the best for the position,” and he cited Sheikh Sabah’s son being nominated to run as an example, claiming that his Karbouli tribe had instead put forward the names of others who had political experience and would thus, he implied, be more likely to serve the needs of their community.

The Karabla (Karbouli) and Albu Mahal (Mahalawi) tribes are traditionally rivals in the key border area of Qaim. Many of the issues between them date back decades, Al-Monitor has been told on various reporting trips to the area, while some of them are connected with how the two tribes initially dealt with al-Qaeda in Iraq in the post-2003 period and members of both tribes who joined the Islamic State (IS).

Support from the government and/or the international coalition during the fight against IS also had an effect. Both the Karabla and the Albu Mahal tribes have tribal Popular Mobilization Units (PMU).

The Aaly al-Furat Brigade led by Col. Moussa Hamad al-Karbouly received training from an elite Danish force and was equipped by the United States, this journalist was told in interviews with the group in the lead-up to the 2017 operations to liberate western Anbar and afterward.

There are three tribal PMUs consisting mainly of Albu Mahal tribesmen active in the area, those close to Sheikh Sabah say: One mostly provides protection for Sheikh Sabah and his family; another is led by a man commonly referred to only as Col. Jamal in the al-Obeidi area; and Kataib al-Hamza, which has a history dating back to the post-2003 “resistance” against the Americans. Many of the Interior Ministry forces in Qaim, the police and SWAT are also from the Albu Mahal.

In the post-2003 period, Kataib al-Hamza started out by fighting against the US “occupation” but later switched and cooperated with it against al-Qaeda, for which many of its members paid dearly.

Security in Anbar often depends on the tribes and their willingness to cooperate with the security forces and fight against extremism.

A tribal PMU commander also from the Albu Mahal tribe but from the town of al-Soufia near Ramadi told Al-Monitor in an interview in his home in early April that “tribes are much more important than political parties here” in the eastern part of the province as well.

He noted that many from the Albu Nimr and other tribes had “disappeared” at the Razaza checkpoint in 2015 when fleeing IS, an incident that still weighs heavily in the region. Relatively few people from the Albu Mahal were among them, however. Hundreds of Anbar residents, mostly men and boys, have not been heard from since, and their families continue to seek information. Many claim that Iran-linked armed groups probably killed them for sectarian reasons.

Thousands of other men, typically the main provider in Anbari families, also disappeared during the years IS occupied the province, between 2014 and 2017, and their relatives usually make recourse first and foremost to tribal leaders in the attempt to get information on their possible whereabouts and/or recognition from the government of their state of widowhood or pension.

This, in turn, further strengthens tribal ties and the likelihood that they will feel indebted to tribal leaders more than the government in Baghdad, which can feel very far away for many of them.