Non-local Popular Mobilization Units seem to be quietly gaining influence on Iraq’s border with Syria against a backdrop of attacks on local facilities now under the control of the Iraqi army. 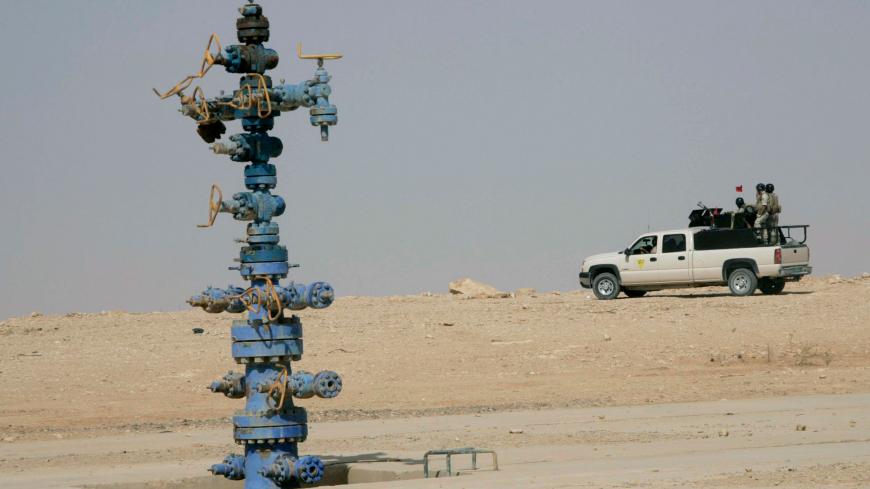 An Iraqi army vehicle sits near the Akkas gas field in the western desert of Iraq, Oct. 19, 2010. - REUTERS/Ali al-Mashhadani

KARBALA, Iraq — Two recent attacks have killed four members of the Iraqi army at or near the Akkas gas field near the Iraqi border town of Qaim.

An Oct. 11 attack on the gas field allegedly conducted by the Islamic State (IS) resulted in the death of at least two Iraqi army officers. Akkas was retaken from IS almost a year ago. On Oct. 16, a freshly planted IED on a road near the gas field killed one more officer and a soldier and injured two others while Al-Monitor was in Qaim.

The Akkas gas field is one of the largest in Iraq. After the field was retaken from IS, it was placed under the control of a Popular Mobilization Units (PMU) militia, Kata’ib Hezbollah (Hezbollah Brigades). Recently, however, it was transferred to Iraqi army control.

The western Anbar commander for the PMUs, Qassim Musleh, told Al-Monitor in an interview in his office in the Karbala shrine complex Oct. 11, “This [attack] only happened because they took it away from us and gave it to the army, which is under the Americans.’’

Musleh, who is also head of the Tufuf Brigade, added, “The army is weak. It can’t control anything.’’

Local security sources contacted by Al-Monitor in Qaim claimed that non-local PMUs were actually behind the attack. The sources said the move was in retaliation for cutting the route used by PMU fighters to bring supplies into Syria, and to prevent investment during a crucial period for the region.

Anbar, Iraq’s westernmost and largest province, is overwhelmingly Sunni, while the non-local PMUs are mostly Shiite. The long-standing reluctance of the army to admit that non-local PMUs are still active in the area, including in Qaim, has given way to quiet admission.

This Al-Monitor correspondent was the only Western journalist to accompany Iraqi troops on the operations to liberate both Qaim and Rawa, the last major IS-held cities in the country, late last year, and has repeatedly reported about the continued presence of non-local PMUs in the area.

Local Sunni PMUs, including the Aaly al-Furat Brigade and Kata’ib al-Hamza, work more closely with the Iraqi army. Aaly al-Furat was trained by Danish special forces and equipped by the United States.

During the Oct. 11 interview in the Karbala shrine complex, Musleh told Al-Monitor, “The time has come for a fatwa against America.’’

A fatwa issued in June 2014 by Iraq's top Shiite cleric, Grand Ayatollah Ali al-Sistani, resulted in the formation of the volunteer PMU forces, some of which were later incorporated into Iraqi security forces and now receive government salaries. The fatwa came after IS had made major gains in the country.

Musleh saw a grand conspiracy behind the security changes at Qaim. “The Americans want the Iraqi army to have control of the road between Iraq and Syria because if the PMUs do, they won’t be able to control us and they won’t be able to move the terrorists across the border,’’ Musleh said, insinuating when not explicitly stating repeatedly throughout the interview that the United States “created and continues to support’’ IS in order to “to control the country.’’

An incident in late September led to a much lower profile for Danish special forces in western Anbar, if not their withdrawal. Sources whom Al-Monitor had contacted before about the Danes' presence in the area were reluctant to discuss the matter and whether or not any Danish troops remain there.

Musleh said Danish forces shot at the PMU headquarters in Qaim and spoke of the United States as the enemy throughout the entire interview, barely mentioning IS at all except to claim that the Americans were supporting it.

“America and the [Iraqi] government didn’t allow us to advance for months sometimes in areas that would have taken only a few days [to clear out],’’ he said.

The government and US forces “agreed to stop the PMUs,’’ he added, indicating that there was a concerted effort to reduce and downplay the role the PMUs had in saving the country.

The PMU brigade commander said he had “never heard of the Razaza checkpoint incident’’ in which hundreds of men from Anbar reportedly disappeared at the hands of the non-local PMUs there.

Mohammed al-Halbusi, the former governor of Anbar who was recently elected speaker of the parliament, told Al-Monitor in two previous interviews that he believed the men were being held in Jurf al-Sakr, in the Babil region bordering Anbar and Karbala, by Kata’ib Hezbollah.

Kata’ib Hezbollah has taken part in many battles alongside the Tufuf Brigades and the two groups are considered closely linked.

Musleh made some easily disputed claims throughout the interview, such as that the city of Rawa had been liberated before Qaim.

He said he had “called the Karbala mosque before the Friday prayers to make the announcement that we had retaken the last IS-held city in Iraq’’ when the border city was entered.

“When the PMUs entered Abu Kamal’’ just across the border in Syria, he added, grinning, “that was the final blow to the US.’’

Musleh also claimed to “have helped the people in Qaim more than the government.’’

As an example, he said that he had “sent a retired gynecologist to the city and her daughter, who is a dentist’’ and that he is paying for all their needs.

When Al-Monitor visited the city early this year there had not been a single gynecologist or obstetrician at the one functioning hospital. By June one had been sent from Baghdad who came for 10 days every month.

The deputy director of the Qaim hospital, Dr. Abd al-Jabbar, confirmed that a retired female doctor originally from Qaim was being financially supported by Musleh in exchange for being unofficially on call for emergency cases when no other doctor was around.

He added that all the security forces were helping the hospital a great deal but that Musleh had personally been especially helpful, including by hauling rubble from the destroyed areas of the hospital away.

Whether this was an attempt to gain support among a distrusting population in an area crucial for supply lines into Syria or done as a “religious duty’’ is up for debate. Western aid organizations also continue to help the city.