Danish elite forces left the Iraqi-Syrian border area in late October against a backdrop of tension between Denmark and Iran. 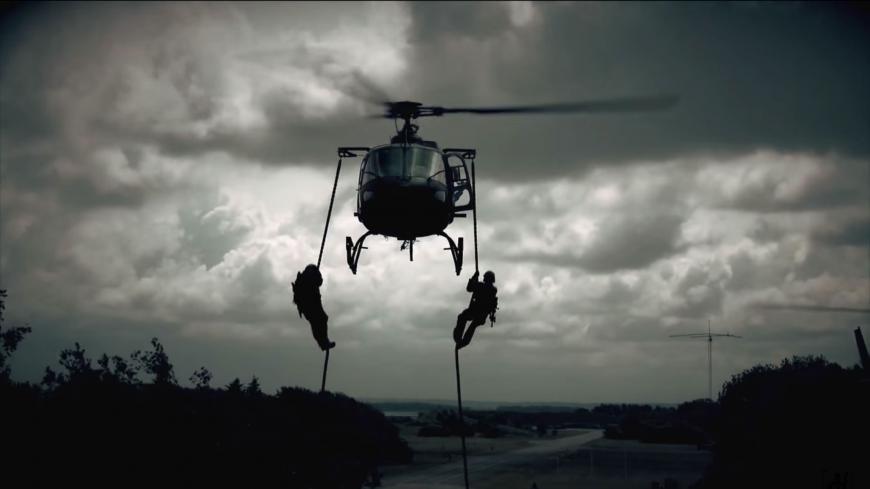 The Danish special forces group known as Jaeger Corps carries out maneuvers in a still from a video uploaded May 13, 2018 - YouTube/Military Tech UPDATE

AiN AL-ASAD AIR BASE, Iraq — In Iraq, tension between the US-led coalition and armed groups linked to Iran has risen in recent months. For example, the United States sanctioned key representatives of Lebanese militant group Hezbollah on Nov. 13, saying they had moved money, acquired weapons and trained fighters in Iraq. Problems have also arisen with some factions of Iraq’s Popular Mobilization Units (PMU).

As a whole, the PMU are part of Iraq’s security forces, but some of its dozens of factions are Shiite armed groups with ties to Iran. There has long been tension between some of the local Sunni population and those Shiite-majority PMUs from southern and central Iraq.

Recently, one of these Shiite factions claimed that elite Danish troops — members of the US-led coalition fighting the Islamic State (IS) in Iraq — fired rockets at them. The PMU unit also alleged the Danes’ guilt prompted them to leave the border area in last September.

The Danish unit, part of an elite fighting force known as Jaeger Corps, denied any connection with the event. The day before they left in late October, Al-Monitor was granted an exclusive interview with Kaare Jakobsen, commander of the highly secretive Jaeger Corps.

The corps had created Task Force 61, the team that partnered with local Sunni PMU fighters in Qaim. For two years, the task force had been training, advising and assisting the PMU militia known as the Aaly al-Furat (AAF) Brigade. Task Force 61 was with AAF on the front lines in the fight to take back western Anbar from IS last year.

It was this Danish/AAF team that allegedly fired on a non-local PMU group, according to the southern Shiite PMU leader, Qassem Musleh, who spent years in exile in Iran before returning to the country in 2003. Musleh told Al-Monitor in an Oct. 11 interview that the Danes had shot at them in September in Qaim.

But Jakobsen said his men had already pulled back in September to Camp Brink at the Ain al-Asad air base in line with a decision that had been made in August that their mission had ended.

He said AAF is the only brigade his men had partnered with in Iraq, though “we have also been training units of the 8th Division from the Iraqi army” under Maj. Gen. Qassem al-Mohammedi, the officer in charge of western Anbar.

“But we work in coalition” forces, Jakobsen stressed, “whether that be with the Americans or other NATO partners.”

Besides the Iran-backed PMU faction’s allegations against the Danes, tension between Denmark and Iran has been rising for other reasons as well.

On Sept. 22, armed gunmen attacked a military parade in Ahvaz in southwestern Iran, killing dozens of people, including civilians. Iran blamed the separatist group the Arab Struggle Movement for the Liberation of Ahvaz (ASMLA), which has members in exile in Denmark. Both ASMLA and IS were said to have claimed responsibility, though ASMLA since has decried the violence and claims to have had no part in it.

Tehran accused Denmark of harboring ASMLA members. On Sept. 28, the Iranian regime allegedly tried to assassinate ASMLA leaders on Danish soil. When Danish authorities discovered the alleged plot, they shut down the streets of Copenhagen and sealed the borders as part of a massive, but unsuccessful, manhunt. On Oct. 21, one suspect was detained in Sweden and extradited to Denmark. The man is a Norwegian national of Iranian descent.

Iran denied there was any assassination plot, but Denmark has recalled its ambassador to Iran and urged new EU sanctions against Tehran.

On Nov. 7, Denmark did detain three individuals thought to be ASMLA members, but released them the same day after police interviewed them. They had been accused of condoning terrorism for publicly praising the Sept. 22 attack.

Meanwhile, during Al-Monitor’s Oct. 11 interview with Musleh in Iraq, he also voiced suspicion of Iraqi forces, claiming members of the army's 7th Division were “spying” on them.

The non-local Shiite PMU factions under Musleh, who commands the PMU’s Tufuf Brigade, now have their area headquarters in the Karabla district of Qaim, a fact that rankles some residents. Musleh is also a PMU leader for western Anbar, but both the non-local and local PMUs operating there officially answer not to Musleh, but to the Iraqi army’s Mohammedi, according to Col. Moussa Hamad al-Karbouly. Anbar province is predominantly Sunni.

In recent months, Tufuf moved its PMU health facility from further south in Akashat to the Karabla headquarters. Tough fighting against IS in recent weeks in eastern Syria, after IS advanced against the Syrian Democratic Forces, may hint that the move is possibly part of preparations for more cross-border activity by the PMU. When dozens of dead and wounded fighters were killed in a June airstrike on Iraqi Shiite militias in Syria, the casualties were taken back across the border to the nearby state-run hospital in Qaim. The mysterious attack hit a base used by the pro-Iranian militias, including Katai'b Hezbollah, which were backing the Syrian regime.

Meanwhile, the Danish elite forces have withdrawn, but “there will be a different Danish battalion of conventional forces at the Ain al-Asad base for training, at least until the end of 2018,” Jakobsen said.

As to which forces the Danish will train, the Jaeger Corps commander said, “If the Iraqi government sends them here, [the battalion] will train them.” However, “the [US-led] coalition will have to approve it, so I don't think that the PMU will be included,” since many of the factions are close to Iran.

“But to be clear on this, we don’t have any problem with the PMU or the Tufuf Brigade,” Jakobsen stressed. “The decision was made in August that the mission we were here on had been completed. It wasn’t because of an incident [the alleged September rocket attack in Qaim] we weren’t a part of.”

Since the Danes’ withdrawal, and as IS has advanced dangerously close to the Iraqi border with Syria in recent weeks, the PMU reportedly has sent reinforcements to strengthen defenses there.

Earlier this year, the Anbar governor at that time asked non-local PMU to leave the region. Instead, they now seem to be bolstering their presence.