Attacks continue to target bases in Iraq hosting international coalition and Iraqi forces. The Danish parliament has, meanwhile, voted to take leadership of the NATO training mission beginning in December and send a frigate to the Strait of Hormuz, a waterway through which much Iraqi oil passes, beginning in late summer. 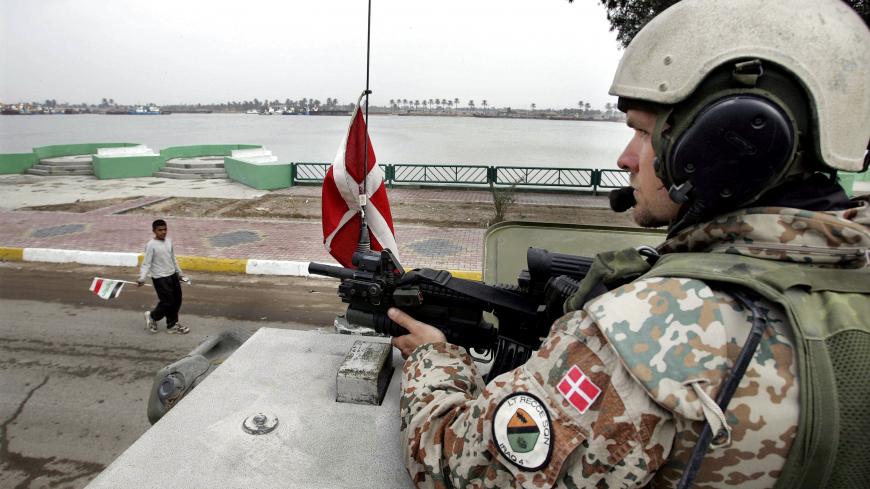 Rockets targeted Iraq’s Camp Taji north of Baghdad on June 13, the latest in a string of attacks widely believed to have been perpetrated by Iran-linked armed groups operating in the country.

No casualties were reported in the latest attack. Two Americans and one British soldier were killed in a previous rocket attack on Camp Taji in March.

The base hosts Iraqi and international forces and is expected to be used by a NATO training mission under Danish command starting in December.

The Danish parliament voted June 11 to take over the mission. Some 285 more Danish military personnel will be sent to Iraq for a year and a half as part of the mission, along with up to three transport helicopters for a year beginning in May 2021.

Meanwhile, a Rudaw news agency report June 10 quoted the US-led coalition as saying that Spain would pull its forces from the Besmaya Range Complex southeast of the capital by the end of the summer. The complex has been one of those used by the training mission.

Coalition spokesman Col. Myles B. Caggins III told Al-Monitor in a June 14 WhatsApp voice message that, in 2018 and 2019, “Military trainers from more than a dozen nations focused on training the Iraqi security forces — and the security forces in Kurdistan Region — on training the trainers. This meant taking junior military leaders and putting them through master instructor courses that were several weeks in length, observing them and evaluating them.”

Now, he said, “We have transitioned from training to mentoring and the next step of this will be with NATO Mission Iraq.”

Denmark will also be sending a frigate to the Strait of Hormuz — the only route to the open ocean for much of Iraq’s oil production and flanked by Iran — four months ahead of taking command of the NATO mission at the end of the year. The frigate will be part of the European-led Maritime Awareness in the Strait of Hormuz, among whose stated objectives is to contribute to regional de-escalation. The ship will have a crew of about 195 and a helicopter.

Attacks on tankers near the strait last year and Iranian threats to close the waterway entirely if Iran is prevented from exporting oil have led to regional tensions.

This journalist was granted an exclusive interview with Jaeger Corps commander Kaare Jakobsen at the Ain al-Asad base in western Anbar the day before the team, which had partnered with the local Sunni PMU fighters, left the country in October 2018. Other Danish forces continued to train Iraqi military troops at the base until early this year.

The Aaly al-Furat Brigade was instrumental in the battle to retake the western Anbar towns of Zawiyah and Sagra from the Islamic State (IS) in January 2017. The brigade went on to help retake all the major cities in the Euphrates River valley stretching to the Syrian border in late 2017.

Iran fired over 20 missiles at the Ain al-Asad base Jan. 8. Denmark is reported to have been warned several hours beforehand that the attack on the base in Iraq’s western Anbar region would take place.

On June 11, the joint statement on the US-Iraq Strategic Dialogue said that over the coming months, the United States would “continue reducing forces from Iraq and discuss with the Government of Iraq the status of remaining forces as both countries” and the “Government of Iraq committed to protecting the military personnel of the International Coalition.”

The statement noted that another meeting a Strategic Dialogue Higher Coordination Committee meeting will be held in Washington, “likely in July.”

The same day, the Danish Defense Command issued a mission update saying, “The packing up of the Danish areas at the Al Asad air base in Iraq has now entered the final stage” and “most of the areas that the Danish soldiers have used for five years in training the Iraqi security forces have been fully prepared. They will soon be transferred to the US coalition partners when the Danish presence on the base is over.”

The statement added, “Since 2014, Denmark has participated in the international coalition fighting the IS terrorist organization in Iraq and Syria. The contribution, which was primarily based at the Al Asad air base in Iraq, is closing down, so Denmark is ready to take over NATO Mission Iraq.” The statement said Denmark would maintain a reduced contribution in Operation Inherent Resolve.

The NATO training mission website says, “NATO’s advisory activities are conducted in Baghdad” and that “training activities are carried out at the Iraqi military schools in the Baghdad area, Besmaya and Taji.”

In his voice message the following day, he said that the coalition had trained over 240,000 troops in the past five years and that it had “divested more than about 5 billion dollars’ worth of equipment.” He also said, “This includes things that are readily identifiable, including Humvees, weapons, ammunition, uniforms and repair parts to keep the vehicles up and running.”

Caggins stressed that the transfer of equipment is “done on a conditions basis,” requiring that “the units receiving the equipment have missions and operations against Daesh (IS)” and that “the leaders of those units have to be vetted for any human rights violations. And then of course there has to be a plan to secure the equipment and make sure that it is handed over properly and accounted for by the government of Iraq.”

Though much focus has been on the anti-US rhetoric and attacks on US forces in Iraq, other Western forces continue being a potential target for both IS and Iran-linked armed groups as well.

A Danish May 26 unclassified Situational and Threat Assessment noted that the “general situation” had worsened in much of Iraq over the previous eight months, citing Shiite militias as being a “political and military threat to Western interests and presence in the country”.

The assessment noted that “the Taji base in northern Baghdad is particularly vulnerable.”