US forces pulled out of the strategic Qaim area on the Iraqi-Syrian border in mid-March, citing success in preventing IS resurgence; locals agree that the Islamic State presence has been significantly weakened but warn the move may lead to nonstate actors gaining more power over official Iraqi security forces. 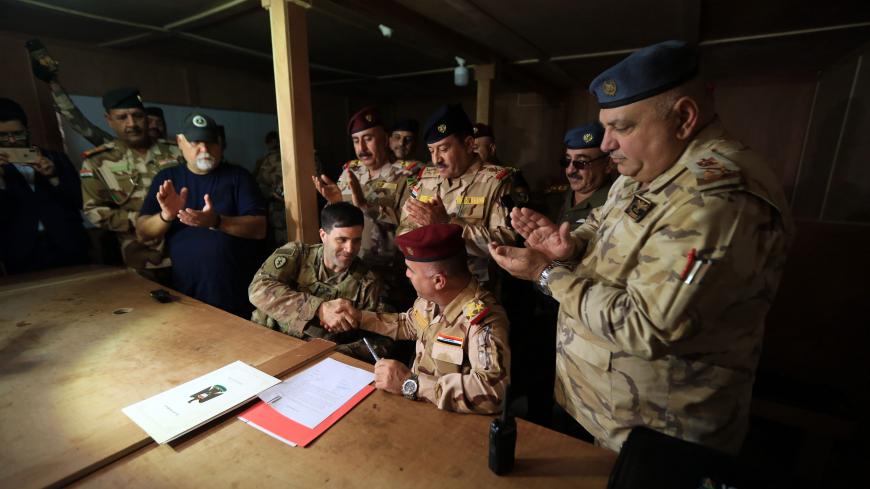 The handover ceremony of Qaim military base in Anbar province on the Iraq-Syria border, March 19, 2020. - Murtadha Al-Sudani/Anadolu Agency via Getty Images

The United States handed over its base near a disused train station in Qaim, along the Iraqi-Syrian border, to Iraqi security forces March 17, almost 2½ years after the international coalition helped Iraqi forces retake the city from the Islamic State (IS).

The city has long been seen as key to influence in this strategic area, with Iranian-backed militias in control just across the border in the Syrian city of Albu Kamal south of the Euphrates River and US-backed, Kurdish-led Syrian Democratic Forces (SDF) in control of Syria's Deir ez-Zor region north of it.

The border, flanked by a vast desert and wadis long used by insurgents as a hideout and traversed by shepherds that have been used both by them and against them, is considered hard to control.

The city itself has been relatively calm for years and subject to occasional attacks only. Residents continue to be wary of the Shiite-led, non-local Popular Mobilization Units (PMU), but have over the years largely become resigned to their presence.

The head sheikh of one of the largest tribes in the area, Sheikh Rabah al-Karbouly, told Al-Monitor that the coalition forces that withdrew had not actually been operating in Qaim.

“They stayed on the base, especially after the military operation in Baghouz [across the border in Syria in early 2019]," he said in a March 22 WhatsApp conversation, adding that the role of the coalition forces had been mainly limited to air support for Iraqi forces.

Karbouly noted, however, “The effect of this withdrawal, I think, will be the expansion of militias at the expense of the [official] Iraqi security forces.”

The Karbouly sheikh told Al-Monitor that though he believes IS has been significantly weakened, he and his children continue to receive threats from them and he must be very careful about his movements and appearing in public.

He noted that though there had been the issue of the PMU arbitrarily arresting local men just after the liberation of the city from IS, tribal leaders had played a major role in getting many released and that the PMU were “very responsive” to their requests.

Karbouly added, however, that the local population is still unhappy about alleged seizure of land in the area by the PMU, the balance of power in their sharing of checkpoints with other Iraqi security forces and ongoing smuggling.

Al-Monitor had interviewed Karbouly in his Qaim diwan the night before a Jan. 8 Iranian attack on the Ain al-Asad base in western Anbar in January, when Iranian and Iran-linked media proclaimed that over a hundred foreign troops had been killed in the act of retaliation for the US’ earlier assassination of Iranian general Qasem Soleimani as he was leaving the Baghdad airport.

None of Al-Monitor’s local sources confirmed a single death in the attack on the base, however, and it later emerged that the forces had been forewarned and thus able to prevent casualties.

This reporter had interviewed PMU chief for western Anbar Qassim Musleh twice in recent years in the shrines complex in Karbala, where he also holds the position of deputy security chief.

In one interview, Musleh said that an elite Danish special forces unit in Qaim had left in 2018 after pressure from the nonlocal PMU. The unit commander told Al-Monitor in an interview at Ain al-Asad that the decision had been due to other considerations.

The unit had trained a local PMU, the Aaly al-Furat Brigade. The brigade works closely with the Iraqi army and not with the Shiite-led PMU, whose commanders are from southern and central Iraq.

Musleh had stressed that the army was too weak to protect the city from IS and claimed Qaim had been “the last city in Iraq to be taken from IS” — though Rawa, further east, was actually the last.

The operation for Rawa, on the northern banks of the Euphrates, required trucking vehicles west to Qaim and bringing them across a damaged bridge — which was, on Al-Monitor’s last visit in January, finally being repaired — and then back eastward across the Roumana desert.

This Al-Monitor reporter was the only Western journalist to accompany the Iraqi forces on both the operation to liberate Qaim and the subsequent one to retake Rawa in late 2017.

Although some sectors of the PMU claimed the March withdrawal from Qaim by the United States was also due to pressure from them, the coalition said it had been planned prior to the surge in Iran-US tension in early January.

Col. Myles B. Caggins III, spokesman for the anti-IS mission, told Al-Monitor, "[The coalition] does not need to be at Qaim any longer because the Iraqi security forces are successfully preventing Daesh [IS] resurgence in western Anbar province."

He added that “one year after the battle of Baghouz, we do not need an artillery firing position at Qaim” and that “we have repositioned some artillery assets to eastern Syria where we are partnered with the SDF to defeat ISIS [IS] remnants.”

On pulling out of some of the other Iraqi bases still hosting US troops, Caggins noted, “We are coordinating closely with the government of Iraq to transfer Q-West and K1 base to the Ministry of Defense in the weeks ahead.”

Al-Monitor discussed the possible effects of the US move with several local security sources who cannot be named for security reasons. The conversations were held via WhatsApp due to the difficulty to access Qaim in this period. This reporter had previously met them during multiple trips to the area over the past two years.

One noted that “there are concerns” among locals and local security forces about the US withdrawal, adding "[The PMU are not a direct threat to us but many of the population and local merchants have not returned because of their fear of militias.”

Shiite-led armed groups in the Sunni province “have tried to strengthen relations with the tribes but the tribes are very afraid of them,” he said, noting that he was referring mainly to Kataib Hezbollah.

Kataib Hezbollah “is a militia that does not answer to anyone else” and still has a heavy presence in the area alongside the Iran-linked Harakat Hezbollah al-Nujaba and Saraya al-Khorasani, he added.

The local security officer said he believes more airstrikes will likely be carried out “on the militias” after the withdrawal.