Iraq's western Anbar province getting back on its feet, eyeing autonomy

Iraq’s Sunni-majority Anbar province has in recent months completed a number of infrastructure works in the hope of attracting more investment as the US troops' presence winds down, amid debate over the possibility of carving out an autonomous region. 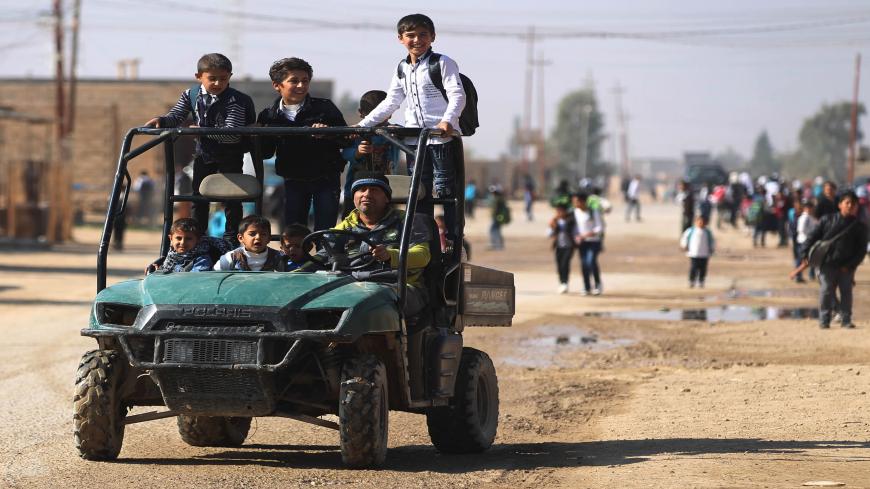 A man drives a group of pupils to school in al-Qaim in Anbar province, opposite Albu Kamal in Syria's Deir ez-Zor region, Iraq, Nov. 13, 2018. - AHMAD AL-RUBAYE/AFP via Getty Images

Three years after the last city held by the Islamic State (IS) in Iraq fell to Iraqi troops with the help of international coalition support, a bleak economic situation with low oil prices and continuing regional instability have for the most part blighted hopes for the rapid reconstruction of areas severely damaged by IS or during the fighting to defeat it.

However, a number of projects have recently been completed in Iraq’s largest and westernmost Anbar province, one of the worst hit by both IS violence and the battles to rid the country of the transnational terrorist group. Others are underway.

As part of stepped-up attempts to bring in more investment, Anbar Gov. Ali Farhan al-Dulaimi told a TV station Sept. 30 that all the money disbursed as part of a $20 million World Bank loan had been spent on projects in his Sunni-majority province, Turkish companies were working in the desert, the Anbar airport “will be operational soon” and “large investment projects” were coming to the province.

Talk of creating a Sunni federal region has recently been heard again in political circles, an option allowed by Article 119 of the Iraqi Constitution if the move were to be approved by one-third of the provincial council and one-tenth of the electorate, as US forces continue to draw down and locals are concerned about undue influence by Iran when and if they leave entirely at some point.

The Anbar region shares a long, porous border with Syria and is the country’s largest as well as its most sparsely populated, with vast deserts and numerous wadis making it difficult to secure properly.

US troops have handed over several facilities in Iraqi military bases this year and most of those remaining are in Baghdad, the Kurdistan Region of Iraq or at Ain al-Asad base in western Anbar, the spokesman for the international coalition at that time, Col. Myles B. Caggins III, told Al-Monitor in September.

In recent years, the Kurdish and Sunni populations have often been seen as closer allies for the United States in Iraq than the Shiite component, part of which has longstanding ties with Iran and involvement in armed groups that regularly attack Western embassies, logistics convoys and military facilities.

Prominent Sunni lawmaker Mohammed al-Karbouli told this journalist in an interview in January in Baghdad that an autonomous Sunni region “could be a way to rebuild the country,” noting that Anbar is rich in untapped resources.

Both Karbouli, who is close to parliament Speaker Mohammed al-Halbusi, and Sunni politicians who would like to see Halbusi replaced both have spoken in favor of such a region.

On Oct. 26, the United Nations Development Programme announced that the reconstruction of the Roumana bridge — a structure that had been heavily damaged in the fighting against IS but was nonetheless used by the army to retake the final IS-held city in Iraq, as it was the only serviceable one in the area at that time to reach the northern banks of the Euphrates — had been completed and that 75,000 people would “benefit from improved accessibility.”

Rawa, almost 90 kilometers (56 miles) east of the border city of al-Qaim but difficult to access due to its position north of the major waterway, was finally retaken on Nov. 17, 2017, by forces that had to go to al-Qaim, cross the damaged bridge and then circle back north of the Euphrates through the desert to get to the city.

Located in al-Qaim district near the Syrian border, even in its previously damaged state the bridge was also used to bring in border reinforcements on the Iraqi side of the Baghouz area during the operation against IS’ last territory across the border in Syria, a year and a half later in early 2019.

This journalist accompanied the Iraqi army during the late 2017 operation to retake Rawa and reported from the Iraqi side of the border during the early 2019 Baghouz operation. Both times, we witnessed the slow, complicated moving of heavy vehicles across the bridge — which were given precedence over the lines of civilian cars and trucks that also had this as their only way to cross the river — and then the improved efficiency already in January of this year.

Sunni tribal leader and Anbar native Sheikh Hamid al-Hayis told Al-Monitor via WhatsApp Oct. 12 that security in the region was mostly good. He noted the rehabilitation of the Haditha oil refinery also in western Anbar, which he said had been completed the previous week, as a sign of progress and a potential spur for further growth.

On Oct. 25, an engineer working on another bridge some 50 kilometers (31 miles) east of Rutba was reportedly kidnapped. Media outlets noted that such an occurrence, once very common, has this year been rarely seen in Anbar province due to the improved security situation.

Local officials and dignitaries have long warned that without significant reconstruction efforts and increased employment, Anbari youth may be at risk of recruitment by insurgent and terrorist groups.

The head sheikh of the prominent Karbouly tribe in al-Qaim told Al-Monitor that smuggling also remains a bane of the local economy and contributes to instability in the area.

On Oct. 14, Sheikh Rabaa al-Karbouly, who this journalist has interviewed several times in recent years in al-Qaim, wrote via WhatsApp that “smuggling is conducted in coordination with forces guarding” the Iraq-Syria border, including nonlocal Shiite-led Popular Mobilization Units (PMU), of “sheep, grains, foodstuffs” and other goods.

He stressed that there is “a complete lack of control over the vast desert” near al-Qaim and that “information is circulating about the presence of small groups of IS in this desert who engage in extortion against shepherds.” He urged the use of “drones to monitor these groups in the desert and the assignment of more tasks to the well-trained security forces to go after them in the desert.”

The sheikh did not specify which security forces he was referring to, but many members of his tribe were trained, advised and assisted by the Danish contingent of the international coalition in previous years, as part of the local Sunni PMU called the Aaly al-Furat Brigade.

In interviewing the then-governor of Anbar in early 2018, before he became parliament speaker later that year, Karma native Halbusi told this journalist that over 100 bridges in the province had been destroyed by IS or during the fight against it, and that about two years would be needed to render Anbar “fully operational.”

With many bridges now fully rehabilitated and other infrastructure works underway, Anbar's residents hope that the province will see enough investment to provide jobs for its youth and may also look into the possibility of forming that long-discussed Sunni autonomous region.