Dozens of Iraqi Sunni lawmakers have met to discuss forming a new alliance after eight youths were killed with alleged involvement by Shiite-led factions in Salahuddin province. 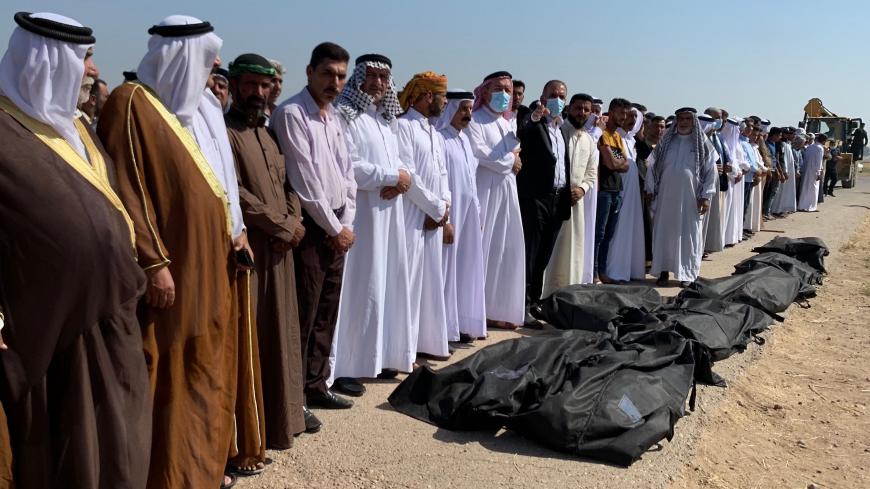 Sunni Muslim men pray over the bodies of eight Iraqis who were reportedly kidnapped on Oct. 17 and later found shot dead, during their burial ceremony in the Farhatiya area of the Balad region north of Baghdad in Salahuddin province, Oct 18, 2020. - AFP via Getty Images

A recent massacre of Sunni youths in central Iraq and concerns that sectarian violence may pull the country back into dark times seem to have fostered plans for a new sect-based political bloc and rekindled talk of an autonomous Sunni region.

The names of those involved in the nascent bloc have raised a number of eyebrows due to their alleged ties. Some see the move as potentially divisive for the community.

On Oct. 23, several sources confirmed to Al-Monitor that dozens of Sunni lawmakers were meeting for the purpose of furthering common aims and setting up some sort of political alliance to do so. The gatherings continued over the two following evenings, with at least one of the politicians flying in from abroad to attend.

Some claim that the envisioned political alliance is an attempt to exploit anger within the Sunni community in the name of personal grievances, especially against Sunni parliamentary speaker Mohammed al-Halbusi, and most likely aims to unseat the speaker.

Halbusi was a controversial choice among longstanding Sunni political leaders in many ways from the time he was sworn in and called an “upstart” due to his young age.

The Baghdad-based website Nas News reported that Atheel al-Nujaifi and his brother Osama, the head of the Salvation and Development Front and a former vice president and parliamentary speaker, both attended the meetings that began on Friday and continued through Sunday.

Atheel is a former mayor of Mosul who was sentenced in absentia to three years in prison in 2018.

The Iraqi news site quoted Osama as saying that one of the matters to be discussed was the Oct. 17 Farhatiya massacre in Salahuddin province, where the bodies of eight Sunni youths were found with gunshot wounds and hands tied behind their backs, and that Halbusi was another. The meetings, according to Osama, were to “coordinate positions,” but “it is important that we do not rush to announce an alliance.” At least 30 parliamentarians reportedly took part in the meeting. Various sources reported the names of some of those present.

There are a total of 329 seats in the Iraqi Parliament, for which the last elections were held in May 2018. The next elections are expected to take place in June 2021, according to a timeline drawn up by Prime Minister Mustafa al-Kadhimi after he was sworn in earlier this year.

The move to form the new bloc was reportedly led by Ahmed al-Jabouri, a parliament member who governed Salahuddin province from 2013 to 2014 and is more widely known as Abu Mazen. The Sunni politician was one of four Iraqis sanctioned by the United States on July 18, 2019, for working with Iran-based proxies operating outside of state control.

Jabouri, like many Iraqi politicians, has been widely accused of corruption. Earlier this year, Reuters published an in-depth report on what it called a “proxy battle” being waged on Iraq by Iran and said that the neighboring country was able to wield considerable influence over Nineveh, largely due to two Sunni politicians’ efforts, naming Jabouri and the Anbar millionaire-turned-politician Khamis al-Khanjar.

Khanjar, one of those who took part in the meetings, left Iraq in the 1990s and only returned in recent years. On Dec. 6, 2019, he was sanctioned by the United States along with three leaders of Iran-linked armed groups including Asaib Ahl al-Haq, which was allegedly involved in the Oct. 17 massacre.

This Al-Monitor correspondent reported frequently from the Salah al-Din governorate during and since the fight against the Islamic State. Many of the local armed groups in the province openly spoke about receiving support from Iran after their attempts early on to get backing from the United States failed. The situation is starkly different from that in Anbar, the population of which is also predominantly Sunni.

Some of the same men who once fought as part of the US-backed Sahwa, or Arab Awakening, against al-Qaeda in Salahuddin over a decade ago are now instead with local Popular Mobilization Units (PMU) that have received support from Iran.

In numerous reporting trips to Anbar in recent years, this reporter has seen increasing distrust of Iranian-linked and Shiite-led armed groups in general there.

One of the local tribal PMUs operating in the strategic border area of al-Qaim, Aaly al-Furat, was trained by the Danes at Iraq’s Ain al-Asad base in western Anbar and equipped in part by the United States. The faction has also received support from the prominent parliament member Mohammed al-Karbouly. Most of the fighters in its ranks are from the Karbouly tribe, of which the lawmaker is a member.

This reporter has interviewed the commander of the PMU several times before, during and after the liberation operations for their native area of Western Anbar as well as the parliamentarian.

In an interview with him in his Baghdad home in January, Karbouly said that he had been the one to strongly encourage Mohamed al-Halbusi to run for parliament speaker in 2018.

In response to questions via Whatsapp, Salahuddin representative Muthanna al-Samarraie told Al-Monitor that he refused to take part in the talks for the potential bloc, saying, “I believe these are attempts to achieve personal aspirations that have nothing to do with reform and are instead merely a reaction to differences of a personal nature” and not “conflicting visions about how to manage and reform the legislative institution as claimed.”

He added that the gatherings “include people accused of corruption and some have more than 200 cases against them,” mostly involving “the plundering of public money.”

Samarraie stressed that the political movement “reflects a much larger conflict at both the local and the regional levels” and is “a tool in this struggle and is not independent of external influence.”

He also noted that although he hopes for a Sunni autonomous region “in line with the law and the constitution,” the lawmaker lamented “the lack of a unified, clear and solid vision on how to form such a region, how to manage it and what should be its future.”

He added, “I also believe that its formation on a sectarian basis will lead to more complications in an already complex situation,” which instead needs “wise leaders, mature mindsets, ambitious visions and sincere and constructive wills.”

Iraq is a Shiite-majority country with mostly Shiite populations in the southern and central regions. Sunni-majority provinces are for the most part further west and north and suffered particularly badly during the years of IS occupation and from the damage wrought by the fighting to retake them.

It is unclear for the moment whether the move to bring together several Sunni political factions will unify or divide and distract an already fractured sect-based part of the Iraqi political scene.