The main Sunni lists that won seats in Iraq's parliamentary elections are negotiating to form one Sunni alliance in order to participate in the formation of the new government. 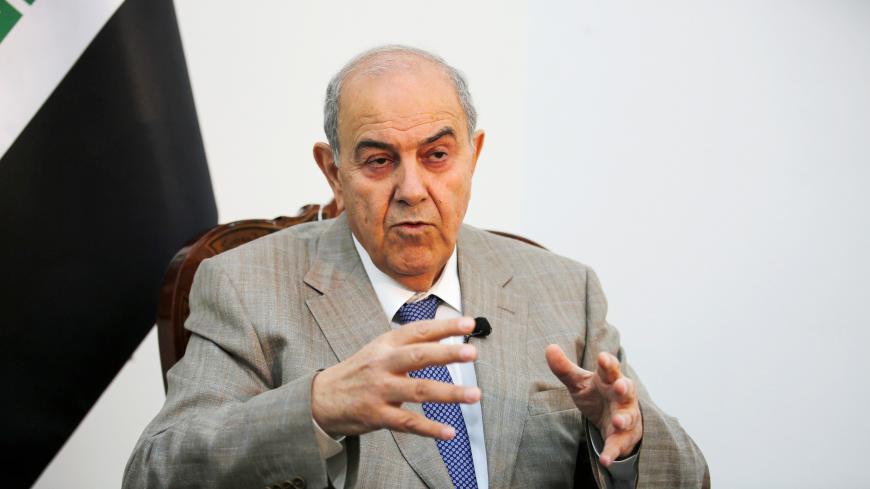 The Wataniya alliance led by Vice President Ayad Allawi has announced that it has agreed to form a Sunni parliamentary coalition capable of leading the parliament with the Al-Qarar alliance led by Khamis al-Khanjar.

Raad al-Dahlaki, a parliament member representing Wataniya, told Al-Monitor, “Both lists have the same orientations and objectives. Therefore, we agreed on unifying ourselves into a parliamentary bloc that may include other lists from Sunni provinces who won in the May 12 legislative elections.”

“Although the majority of those on the lists are Arab Sunnis, we believe in national principles and objectives and we do not adopt a sectarian platform. Moreover, the Iraqi fait accompli necessitates that we take part in the next government by agreement with Shiite and Kurdish blocs,” Dahlaki said.

“The Sunni bloc is holding on to assuming the speakership of the parliament and has no interest whatsoever on who would assume prime minister, especially since the biggest Shiite bloc has not been formed yet and so far no other name has been brought forward to us,” Dahlaki said.

Leaders of the Sunni blocs held their first post-election meeting May 22 at the house of Osama al-Nujaifi, who is among the vice presidents. The meeting was attended by Sunni leaders, a number of ministers and representatives who won seats in the elections, political leaders and candidates from Sunni provinces who did not win seats. During the meeting, Nujaifi demanded that the attendees have a unified voice, unanimity and share the same burdens and expectations as their masses and to speak honestly and seriously, his media office said in a statement. It also said, “The opportunity is still open to realize goals of concern to all citizens such as the return of the displaced and migrants, reconstruction … and execution of a governmental platform through genuine partnership based on a wide national consensus.”

The Baghdad-based Al Mada newspaper quoted Zaid al-Janabi, leader in the Civil Society for Reform under the leadership of parliament Speaker Salim al-Jabouri, as saying May 22, “There is a move to gather the largest number of Sunni representatives in one parliament bloc leading toward a coalition with the Shiite bloc holding the biggest majority and establishing a new government.”

Janabi said most Sunni blocs prefer the Nasr coalition, led by Prime Minister Haider al-Abadi, which finished in third place with 42 seats, and support a second term under his Cabinet.

Even though Allawi is a liberal Shiite, he will apparently head the largest Sunni bloc in the elected Iraqi parliament, given that Wataniya has the largest number of Sunni seats. Allawi’s bloc will be the natural heir of official Sunni state offices under the quota system. As has been customary since the first elected government in 2005, such Sunni posts include the speaker of parliament, vice president and various ministries.

Al-Qarar leader Dhafer al-Ani told Al-Monitor, “A coalition with lists from provinces liberated from the Islamic State depends on how close or far each list is from Qarar's platform, whose top priorities are rebuilding the provinces, returning the displaced and providing services and security.”

“The Qarar coalition puts no red lines whatsoever on any list that won or person running for prime minister. Our only criteria is the platform submitted by blocs and their candidates running for executive posts,” Ani added.

He said, “Negotiations are still under way with everyone without exception.”

It is remarkable that there had not been, until today, many announced meetings for Sunni lists that won seats in parliament; Shiite groups have been holding a lot of meetings, the most important of which were led by the head of the Sairoon Alliance, Muqtada al-Sadr, in Baghdad. Sairoon won the most seats of any alliance in the election.

The Sunni bloc will not likely have the numbers it had in the past, as a number of Sunni candidates are participating on Shiite lists. For example, Khaled al-Obeidi, a former member on the now-defunct United List representing Sunnis, is now a Nasr leader. The list he headed won seven (Sunni) seats in Ninevah. He also has his own party, the Flags of Goodness, which won two seats in Ninevah, and has links with the Baghdad Coalition, which includes a female candidate from the Patriotic Union of Kurdistan. It is unclear how many Sunni parties that used to form part of wider Sunni coalitions will do so this year or whether they will integrate into other Shiite lists.

However, due to the complex nature of sectarianism, racism and absence of national parties in Iraq, it is highly unlikely that sectarian quotas will be done away with in forming the next government, as Sadr has spoken of doing. The largest three blocs, Shiite, Sunni and Kurdish, will join forces based on minimum conditions for a coalition, despite accumulating internal disputes. It also could be that once a government is formed, and top positions are handed out, parties that wind up disappointed will withdraw from the governing coalition.