Iran is pushing its allies in Iraq, particularly the State of Law Coalition and the Fatah coalition, to form the largest bloc in the parliament in order to prevent Muqtada al-Sadr from leading the formation of the new government, which would affect Tehran's influence in the country. 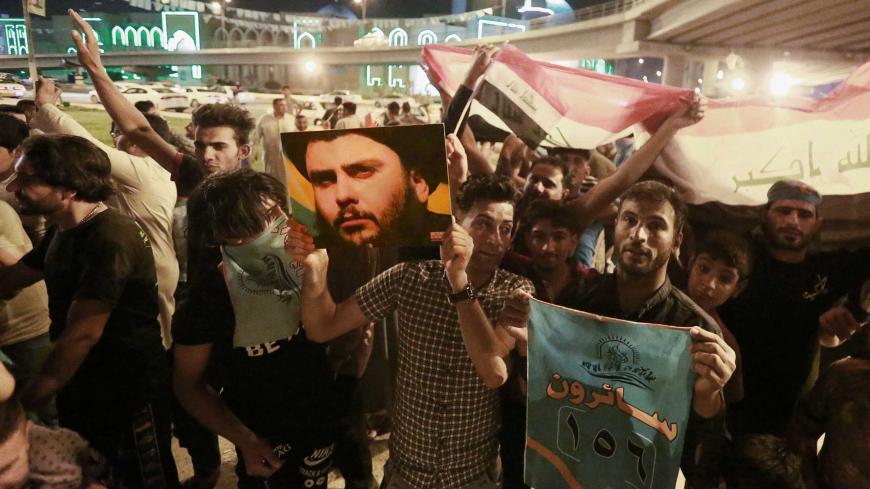 Iraqi supporters of Sairoon celebrate with Iraqi flags and a picture of Shiite cleric Muqtada al-Sadr after the results of Iraq's parliamentary election were announced, in Najaf, Iraq, May 15, 2018. - REUTERS/Alaa al-Marjani

The Sairoon (On the Move) Alliance formed by Muqtada al-Sadr and the Iraqi Communist Party is ahead in the preliminary results of the Iraqi elections. More than 90% of the votes in all of Iraq's provinces have been counted so far, with the exception of Dahuk and Kirkuk, where counting was postponed.

Sairoon has so far secured 54 out of a total of 329 parliamentary seats, while the Al-Fatah Alliance, formed by the Iranian-backed Popular Mobilization Units, has won 44 seats, followed by 39 seats for Prime Minister Haider al-Abadi's Al-Nasr Alliance. The State of Law Coalition led by former Prime Minister Nouri al-Malik has secured 25 seats, and the Al-Wataniya Alliance of former Prime Minister Ayad Allawi has obtained 22 seats.

“The door is open” for Sairoon to work with any of the rival blocs, said Dhia al-Asadi, head of the political bureau of the Sadrist Movement, on May 14 after the announcement of the preliminary results of the elections. “Sairoon has the right to claim the post of prime minister,” he said. On May 16, Sadr, the head of the Sadrist Movement, confirmed his wish to form a government of technocrats free of partisanship and sectarianism.

In a May 14 tweet, Sadr hinted at the alliances and broad nature he hopes will characterize the new government. Using a play on words derived from the meaning of various political entities' names, he wrote: “We are Sairoon (On the Move) with Hikma (Wisdom) and Al-Wataniya (Patriotism) to make the people's Iradah (Will) our demand, to build Jilan Jadidan (a New Generation), to witness Taghir (Change/Gorran) toward reform and for the Al-Qarar (Decision) to be Iraqi," continuing the puns with, "So we raise the Bayariq (Banners) of Al-Nasr (Victory), and to make Baghdad, the capital, our Hawiyatuna (Baghdad is Our Identity) and our Hirakuna (Democratic Movement) move toward the formation of a paternal government from among technocratic Kawadur (Cadres) free of partisanship.”

If Sadr can achieve an alliance that includes the aforementioned forces, he would form the largest bloc and isolate his rivals, the Al-Fatah Alliance and the State of Law Coalition.

Arab powers opposing Iran, led by Saudi Arabia, welcomed Sadr's victory and expressed hope that it will undermine Iran’s influence in Iraq. Thamer al-Sabhan, the minister of state for Arabian Gulf affairs at the Foreign Ministry and a former Saudi ambassador to Iraq, commented on Sadr’s tweet and retweeted, “You are really Sairoon (on the move) with Hikma (wisdom), Wataniya (patriotism) and Tadhamon (solidarity). You have taken Al-Qarar (decision), toward Taghyir (change) to have Iraq raise the Bayariq (banners) of Al-Nasr (victory), to [secure] independence, Arabism and identity. I congratulate Iraq for having you."

But this does not prevent Sadr's rivals from seeking to sideline Sairoon by forming a larger bloc in a rival axis.

State of Law Coalition spokesman Abbas al-Musawi expressed skepticism May 16 that some electoral lists (in reference to Sairoon) will be able to form a government, stressing that “historic leaders” will be the key drivers in this matter. State of Law Coalition parliament member Mohamed Sahyoud said May 15 that efforts are near completion to form an alliance between the State of Law, Al-Fatah and Al-Nasr coalitions, which would secure more than 100 seats and account for the largest bloc in parliament. If this occurs and the bloc gets support from some Kurdish and Sunni forces loyal to Iran, the next government could be formed by the axis opposing Sadr.

Al-Monitor learned from sources who asked not to be named within the State of Law, Al-Fatah and Al-Nasr coalitions that the commander of Iran's Quds Force, Qasem Soleimani, who has been in the Green Zone in Baghdad since May 14, is leading efforts to strike an alliance deal between the State of Law Coalition's Maliki and Al-Fatah Coalition leader Hadi al-Amiri, and then to encourage Al-Nasr's Abadi and Al-Hikma's Hakim to join this alliance. If Soleimani succeeds, this could prevent Sadr from forming the largest bloc.

Soleimani was said to have proposed that these alliances refrain from nominating any of their leaders. Other names are being put forward as a consensus prime minister, including Muhammad Shayya al-Sudani, who is one of the Dawa Party leaders and the minister of labor and social affairs in Abadi’s government.

An earlier report by Al-Monitor indicated that negotiations by Soleimani in Erbil led to an agreement with the Kurdistan Democratic Party not to support Abadi as prime minister. Nechirvan Barzani, the prime minister of the Kurdistan Regional Government (KRG), revealed upcoming plans for a visit by a KRG delegation to Baghdad to participate in talks aimed at forming the next government.

Hisham al-Rekabi, who heads Maliki's media office, said May 16 that all discussions to form the largest bloc “will be completed within the next 48 hours.” Dawa Party leader and parliament member Kamel al-Zaidi spoke of “semifinal” understandings between the State of Law and Al-Fatah coalitions, in addition to current attempts to include other [parliamentary] blocs in this larger bloc. Zaidi added, “There are ongoing contacts with the National Union Front and Barham Salih's party, as well as with Sunni political authorities to form an alliance that guarantees a national political majority.”

On May 15, US State Department Spokeswoman Heather Nauert answered a question about Soleimani’s interference in the ongoing consultations to form the Iraqi government. “That is certainly always a concern of ours, but we have a great deal of trust and faith in the Iraqi people and whoever ends up governing, whatever the structure is, the governing of that country going forward,” she said.

Iran appears to be in a hurry to strike a deal between its loyalists for fear of Sadr's success in dominating the next government, which would curb its influence in Iraq.