Muqtada al-Sadr, whose alliance got the most votes in the May 12 elections, has been meeting with leaders of other alliances in the hope of forming form a nonsectarian "national" government that includes all components of Iraqi society. 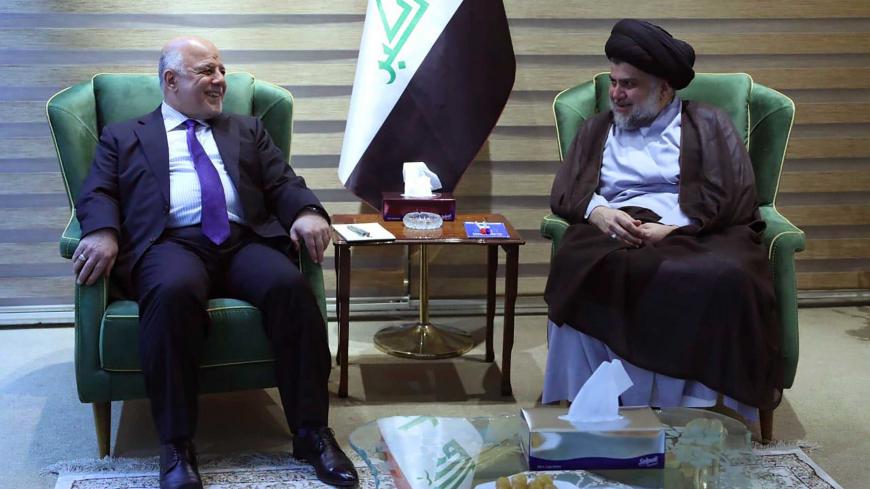 After the Sairoon (On the Move) Alliance emerged victorious in the May 12 Iraqi elections, its leader, Muqtada al-Sadr, has been seeking meetings with the leaders of the other top-vote-getting alliances to discuss the possibility of forming the largest bloc in the new parliament and ultimately form the new Cabinet.

At a May 19 joint press conference after talks with Sadr, Prime Minister Haider al-Abadi, whose Al-Nasr (Victory) Alliance came in third, said, “During our meeting, we agreed to work together and with other parties to expedite the process of forming a new Iraqi government.” A few days later, on May 22, Al-Nasr spokesman Hussein al-Adeli said Abadi had reached an agreement with Sadr on a map for forming a new government. Abadi himself, in his weekly press conference the same day, said his coalition was close to reaching an understanding with the Sairoon Alliance “to form a strong technocratic government.”

In a May 20 meeting with Hadi al-Amiri, leader of the second-place Fatah Alliance, consisting of the political wings of the pro-Iran militias of the Popular Mobilization Units, Sadr had said, “The process of government formation must be a national decision, and importantly, must include the participation of all the winning blocs along a national path.” Sadr appeared to select the phrasing “national decision” and “national path” especially for Amiri, who had days earlier met in Baghdad with Qasem Soleimani, commander of Iran's Quds Force, in an attempt to form a pro-Iranian parliamentary bloc.

Sadr also held talks with Ammar al-Hakim, leader of the Hikma Alliance, on May 21 and spoke of the importance of forming the upcoming government in a way that ensures “fixing the path of the political process to suit the aspirations of the Iraqi people who reject sectarianism and corruption.”

Sadr also met May 21 with Iyad al-Allawi, leader of the predominantly Sunni Al-Wataniyah Alliance, and two days earlier had received a letter from Kosrat Rasoul Ali, first deputy for the secretary-general of the Patriotic Union of Kurdistan, in line with discussions on potential alliances requiring Sunni and Kurdish participation alongside the Shiite majority to form a government.

After failing to assemble a parliamentary bloc under Iranian auspices consisting of the four largest Shiite lists — the State of Law Coalition and the Al-Nasr, Hikma and Fatah Alliances — Iranian Ambassador to Iraq Iraj Masjedi attempted to lure Sadr to his side to prevent the formation of an anti-Iran government. Masjedi told Iran's Al-Alam TV May 21, “Iran has constructive relations with all parties, blocs and coalitions that won the majority of parliamentary seats in the fourth elections.”

Masjedi also denied rumors of a dispute between the Iranian leadership and Sadr, saying, “Iran’s relations with Sadr are historical and deep-seated. The country had close relations with the martyrs Mohammed Baqr and Mohammed Sadeq al-Sadr [Muqtada's uncle and father, respectively].” Masjedi added, “Iranian officials’ relations with Sadr are friendly and brotherly, and many of them, including Soleimani, appreciate Sadr greatly.”

In fact, Sadr’s father and Iranian officials were not friendly at all. His representative in Iran, Jaafar al-Sadr, son of Mohammad Baqr, was arrested and his office shuttered in Qom in 1998. In addition, everything indicates that relations between Muqtada and Iran have gone downhill as well in recent years.

Sadr had made several statements critical of Iranian interference in Iraqi decision-making, and his alliance competed against the pro-Iran lists — Al-Fatah and the State of Law Coalition — in the elections. In the preceding years, Sadr’s supporters chanted slogans against Iran at protests calling for reform. Sadr, unlike his rivals Maliki and Amiri, has not met with Soleimani in recent years.

Sadr greeted a group of ambassadors from neighboring countries May 19 after his list's victory was confirmed. In attendance were the ambassadors of Saudi Arabia, Jordan, Kuwait, Turkey and Syria. Official Iranian websites, including Al-Alam's, criticized Sadr’s relations with Saudi Arabia and charged that Riyadh had been behind Iran's exclusion from the meeting.

On May 21, Sadr tweeted, “I am Muqtada. I am Shiite, Sunni, Christian, Saebean, Yazidi, Islamist, civil, Arab, Kurdish, Assyrian, Turkmen, Chaldean and Shabak. I am Iraqi. Do not expect me to side with any sect against the other to renew enmities and lead to our demise. We are headed toward a comprehensive Iraqi alliance.”

Al-Hayat newspaper on May 21 cited Iraqi sources close to Sadr discussing efforts to bring together Abadi, Allawi, Kurdistan Democratic Party leader Massoud Barzani and Sunni Al-Qarar Alliance leader Khamis al-Khanjar to explore forming the leading parliamentary bloc with all their parties’ participation. If Sadr succeeds, Iraq might overcome sectarian quotas in forming a government, and Iranian influence would dwindle with its political allies, Al-Fatah and the State of Law Coalition, excluded from the bloc.