Sadr allies with Iran-backed coalition to form government in Iraq

In an unexpected move, the Sairoon Alliance led by Muqtada al-Sadr formed a coalition with the pro-Iranian Fatah Alliance, getting them close to a majority needed to form a new government. 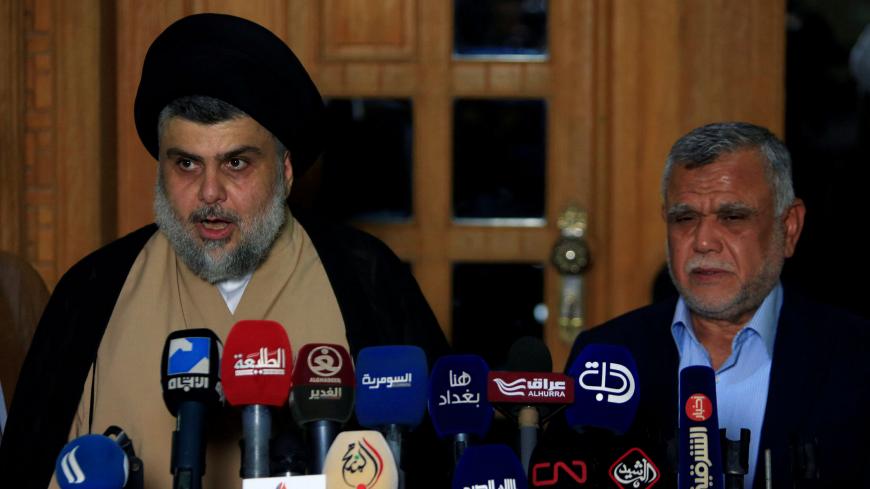 In the wake of the sudden coalition deal struck between Muqtada al-Sadr's Sairoon Alliance and the pro-Iran Fatah Alliance on June 12, the allied parties seem to be trying to soften the reactions of the opposing parties both inside and outside Iraq.

In an official statement aimed at reassuring Washington that the new coalition would not adopt a policy hostile to the United States in Iraq, Karim al-Nuri, a leader in the Fatah Alliance, denied June 13 that his alliance is facing US opposition, saying, “The new coalition is in tune with the vision of Iran and the United States,” meaning that the new government that will result from this coalition will maintain the post-2003 moderate policies adopted by the Iraqi governments in keeping the balance of power between Iran and the United States, work to satisfy the two parties in Iraq and seek to keep their rivalry from affecting the country.

The new coalition is also trying to reassure the religious authority in Najaf that it will be following the directives the authority issued before the recent elections. Nuri said that the new coalition would also “satisfy the religious authority.” Top Shiite cleric Grand Ayatollah Ali al-Sistani had expressed his outright opposition to the participation in the elections of the Popular Mobilization Units grouped under the Fatah Alliance.

In a joint news conference held by Sadr and Fatah Alliance leader Hadi al-Ameri following the agreement on the coalition deal, Sadr said, “Fatah’s alliance with Sairoon maintains the tripartite alliance between the Sairoon Alliance, the National Wisdom Movement and Al-Wataniya Alliance.”

Sadr had signed a coalition deal with both Al-Wataniya Alliance led by Vice President Ayad Allawi, which includes a large number of Sunni members of parliament, and the Shiite National Wisdom Movement led by Ammar al-Hakim.

This deal brings the coalition close to having a majority capable of forming a government, as the Sairoon Alliance has 54 seats, the Fatah Alliance 47, Al-Wataniya Alliance 21 and the National Wisdom Movement 19, which brings the total to 141 seats. A majority of 165 out of the 329 parliament seats is needed to form a government, meaning that the new coalition only needs 24 more seats to proceed.

The two main Kurdish parties — the Kurdistan Democratic Party (KDP) and the Patriotic Union of Kurdistan (PUK) — welcomed in a joint statement the recent coalition deal between the Sairoon Alliance and Fatah Alliance, and described the coalition as a “positive development” that marks the first step on a political road map aimed at breaking the political deadlock. The KDP and PUK indicated that they will be forming a joint delegation to start talks with the new coalition.

If the two Kurdish parties, which won 25 seats and 19 seats, respectively, do join the new coalition, then the latter would have 185 seats, which is more than enough to form the next government.

Also, the State of Law Coalition, which won 25 seats and is led by former Prime Minister Nouri al-Maliki, might join the new coalition between Sairoon and Fatah. Qais al-Khazali, the leader of Asaib Ahl al-Haq bloc within the Fatah list, met with Maliki June 13 to discuss “the political and security developments in the country and the future of the political process in light of the current developments,” according to a joint statement issued by the two. They asserted the “need to form a comprehensive national alliance capable of building state institutions and involving everyone in the development of the next government program.”

All this means that outgoing Prime Minister Haider al-Abadi and his coalition would be excluded from the next government, as there will be no need for Abadi in the new coalition. And even if Abadi does join the coalition, he would not have a major role to play, which means that he would have no chance of maintaining the post of prime minister.

These rapid developments come in the wake of several bombings that targeted Baghdad, most notably the explosion June 6 in the arms depot of Sadr City, which is predominantly loyal to Sadr, as well as the June 10 burning of the warehouse where ballot boxes were kept in the Rusafa district of Baghdad.

The growing differences over the results of the recent elections have deepened the tension plaguing the country, which prompted several political parties, including Sadr himself, to warn against the outbreak of civil war in Iraq.

All indicators show that the recent coalition deal comes following pressure placed on both Sairoon and Fatah, as there had been no previous preparations for such a deal, which was concluded very quickly amid the recent tension.

Nuri confirmed his alliance’s coalition deal with Sairoon is “a big and powerful coalition between two big and powerful alliances that no one can aggravate the situation without. This coalition is a message of reassurance to the Iraqi people before proceeding to form the largest parliamentary bloc concerned with forming a government.”

He explained that this is “a message to all to lift the tension and ward off the specter of civil war, all the while excluding the option of repeating the elections. This message seeks to alleviate the burden weighing on the shoulders of the Iraqi people.”

The new coalition is seen as a victory for Iran's policy in Iraq, as Iran will be able to maintain its influence through the pro-Iran Fatah Alliance. This alliance is allied with the Sairoon Alliance, which shares Iran's hostility toward the United States.

The new coalition has also raised the ire of Saudi Arabia. Saudi writer Jamal Khashoggi called it “frustrating for those who already rushed to spread the news whereby Iraq has returned to its Arab environment. This is what happens to those who anticipate the results and live in the illusion of virtual victories.”

The most difficult choice is in the hands of the Communist Party and the civil movement, which is allied with Sadr in the Sairoon Alliance, as their election promises focused on getting rid of sectarian quotas and regional alliances and looking toward a new government that fights both corruption and the failure to manage the Iraqi state since 2003. It does not look like the new coalition will fulfill this ambition.