As negotiations to form Iraq's next government kick into high gear, Sunni and Kurdish leaders are streaming to the house of triumphant Muqtada al-Sadr. 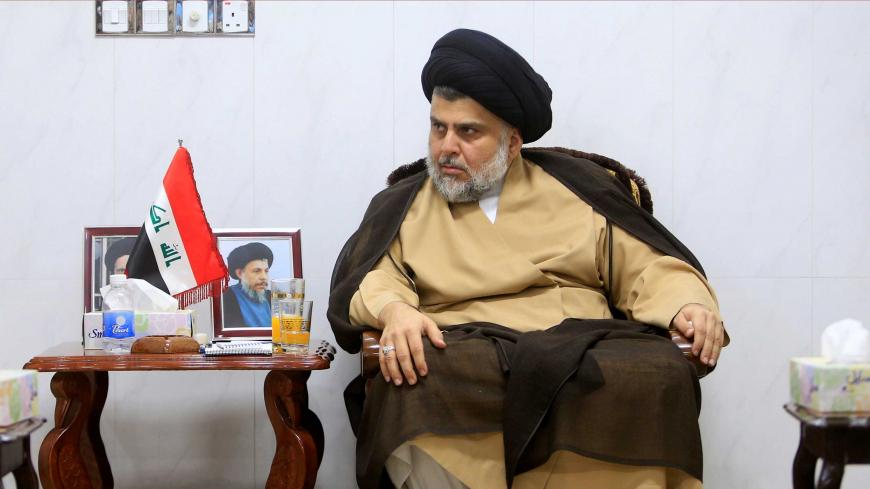 The main negotiations between Sairoon Alliance leader Muqtada al-Sadr and Prime Minister Haider al-Abadi produced “near complete alignment to form a strong technocratic government,” according to Abadi in his weekly conference May 22. In the wake of these negotiations, Sunni and Kurdish delegations flocked to meet with Sadr to join the next government.

Sadr welcomed former speaker and head of the Al-Qarar Alliance Osama al-Nujaifi in Baghdad the same day. Sadr’s political bureau said in a statement that the meeting was part of the negotiations and efforts “to form an inclusive national government.”

Sadr also met with Khaled al-Obeidi, the head of Bayariq al-Khair Bloc allied with Abadi in the Nasr Alliance. During the meeting, read the same statement, “the parties discussed the national goals and principles that are top priority in the inclusive government the Iraqi people look forward to regardless of their affiliations and sects, hoping that the government will pull the people out of their poor economic situation and fight the corruption and sectarianism that bred terrorism.”

Sadr had met with the leader of the Sunni Al-Wataniyah Alliance earlier.

Diyaa al-Asadi, an officer in Sadr’s political bureau, said May 22, “The Sairoon Alliance is communicating with Sunni figures politically and socially.”

He denied that Saudi Arabia has played any role in Sadr’s upcoming alliance with Sunni blocs. He asserted that the alliances will be formed along the lines of Iraq’s national interests. He also rejected allegations that Sadr’s political orientation in forming the new government will include enmity with Iran. He asserted, “Sadr won’t allow Iraq to be used to attack any neighboring country.”

Sadr also welcomed a delegation from the Kurdistan Democratic Party (KDP) headed by Fadel Mirani to discuss the formation of the government and discuss how the Kurds can participate in it. Mirani underlined that the next government should solve all problems with Kurds and work together with all the Iraqi people. Sadr noted the importance of uniting the Kurds following political developments and events in the country.

Sadr met with the head of the New Generation Movement, Shaswar Abdel Wahed, a powerful and influential figure who opposes the two biggest Kurdish parties: the KDP and the National Unity Party.

Many Sunni and Kurdish political forces seem to consider Sadr a reliable partner in forming a new government, setting him apart from competitors like former Prime Minister Nouri al-Maliki, who is accused of breaking many of his political promises to Sunnis and Kurds. In an interview with Rudaw, head of the KDP Massoud Barzani described Sadr as a “man who keeps his word.”

Although Sadr had objected to holding a referendum for the independence of the Iraqi Kurdistan Region last year, he did not support military action to resolve the disputes that followed.

Abadi also enjoys a good reputation among Sunnis and Kurds compared to his rival Hadi al-Amiri, the head of Al-Fatah Alliance, which is composed of pro-Iran factions that Sunnis and Kurds accuse of violating human rights during the fight against the Islamic State and in retaking disputed lands from the Iraqi Kurdistan Region.

Zeid Sweidan al-Janabi, a leader in the Civil Society for Reform spearheaded by Salim al-Jabouri, asserted, “The majority of Sunni powers will back and join any coalition of which Abadi is a member.

Sadr and Abadi's Sunni and Kurdish partners could still be convinced that their partisan interests will best be served by the State of Law Coalition.

With the dispersion and weakness plaguing Kurdish and Sunni forces, it could be easy for a strong Shiite alliance to lure enough Sunnis and Kurds to form a big enough coalition to make up the next government.