Kurds put conditions for allying with Shiites to form government

Shiite parties seek to gain favor with the Kurdish parties to include them in the majority charged with forming the new government, while the Kurds consider this a historical opportunity to impose their conditions on those wishing to ally with them. 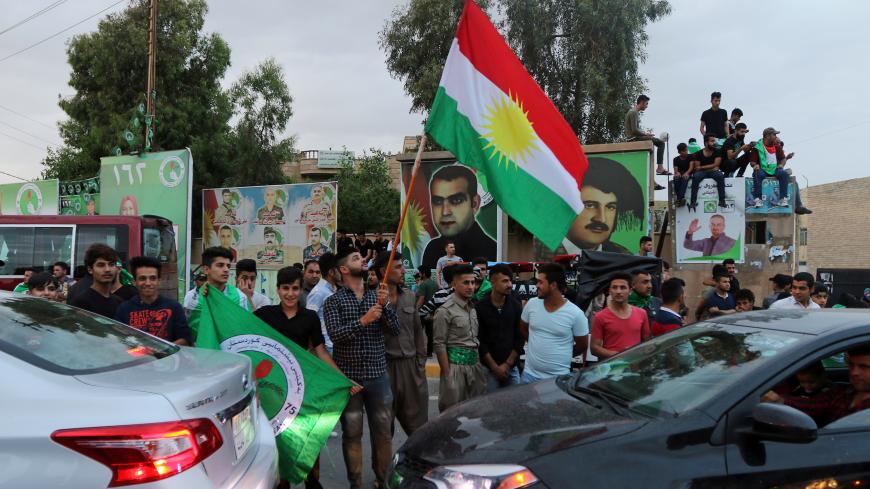 Kurdish supporters of the Patriotic Union of Kurdistan celebrate after the closing of ballot boxes during the parliamentary election, Kirkuk, Iraq, May 12, 2018. - REUTERS/Ako Rasheed

After agreeing Aug. 22 to unite the Kurds within a bloc accounting for the total number of the 55 Kurdish seats, in order to continue conducting dialogues formally with Baghdad, Patriotic Union of Kurdistan (PUK) leader Arez Abdullah announced the Kurds’ conditions for participating in the government.

He also stressed that "our demands are legitimate and we will join forces with the axis that is consistent with our political vision.”

The Shiite parties are currently split along two lines. The first brings together the State of Law Coalition led by Nouri al-Maliki and the Fatah Alliance led by Hadi al-Amiri, while the second includes Al-Nasr Coalition led by Haider al-Abadi, Muqtada al-Sadr's Sairoon Alliance and the Hikma bloc led by Ammar al-Hakim. Each believes it is capable of forming the largest parliamentary bloc separately from the other once they succeed in swaying the Sunnis and the Kurds.

According to Massoud Barzani’s media adviser, Kefah Mahmoud, the Kurdistan Democratic Party (KDP) led by Barzani considers itself closer to Maliki's coalition so far, but is not drawing red lines on Abadi's coalition. Mahmoud told Al-Monitor that the KDP has agreed with the PUK on the prerequisites for joining forces with any Shiite bloc, and those include “achieving balance between Iraqi components in state institutions, maintaining a real partnership in state administration and implementing the Iraqi Constitution regarding the status of the disputed areas, including Kirkuk.”

He said, “The normalization of the situation under Article 140 of the constitution is the only solution to the disputed areas. Otherwise conflicts and problems shall persist.”

Mahmoud added, “The Kurds are looking this time for pledges with international guarantees and time frames for fear of false promises as in the past.”

The Kurds are seeking to change the status quo in Kirkuk that followed the Iraqi Kurdistan independence referendum on Sept. 25, 2017, and allowed Iraqi security forces and Shiite Popular Mobilization Units (PMU) to take over the oil-rich province expelling peshmerga forces. Therefore, the Kurds are now having reservations about Abadi whose actions came as "punishment to the people of Kurdistan,” according to Mahmoud, and about the Fatah Alliance that represents the PMU factions in control of Kirkuk.

PUK member Saadi Birah told Al-Monitor, “The PUK has set up a joint project with the KDP that states the conditions for allying with the largest parliamentary bloc to form the government. This project consists of 27 clauses, most of which are related to the disputed areas.”

He also noted that “negotiations with other Iraqi parties will take place immediately at the conclusion of discussions between the Shiite blocs.”

The Kurdish parties seem for the time being hesitant or unwilling to favor Maliki or Abadi. Before stating their final position, they are waiting to see the pledges and guarantees that both parties will provide. Shiite parties do not dare make any concessions regarding Kirkuk and other disputed areas in Ninevah, Diyala or Salahuddin, so as not to be accused afterward of “waiving” federal gains made by the current government.

Naim Aboudi, spokesman for Asaib Ahl al-Haq (League of the Righteous) belonging to the Fatah Alliance, said, “The Sunnis’ or Kurds’ conditions on the largest bloc in the next government will push the Shiite blocs to realign themselves because the Iraqi street will not show any mercy."

He added in a tweet, “Fatah is a tenacious ally, but it has rules for agreeing or disagreeing,” underlining that it maintains dialogues “with everyone without compromising our principles and rights.”

It is not unlikely to revive the Shiite alliance again, especially since Qasem Soleimani, commander of the Islamic Revolutionary Guard Corps' Quds Force, arrived last week in Iraq, at the same time as Iraq's Federal Supreme Court ratification on the final results of the election. Soleimani is known to have strong relations with all the Shiite parties, and Tehran might seek to unite the Shiite parties allowing them to impose their own conditions on the other Iraqi parties.

On the other hand, the political parties are aware that US envoy to Iraq Brett McGurk, who also arrived in Iraq at the same time as Soleimani, is urging the Kurds and Sunnis to join the Sadr-Hakim-Abadi alliance. Fatah Alliance member Jassem al-Bayati said in a statement to Almaalomah news agency, “Washington is trying through Trump’s representative, Brett McGurk, to pressure the Shiites, Sunnis and Kurds to support Abadi for a second term."

He noted that “Abadi's position on the US sanctions against the Islamic Republic of Iran has increased his chances in Washington for a second term.”

Negotiations for the formation of the largest parliamentary bloc are likely to take more time than expected, perhaps exceeding the time frame stipulated in the constitution, due to the huge complexities on the Iraqi scene that coincide with the height of the US-Iranian conflict. Therefore, the Kurds will not engage in any negotiations with the Shiite parties before the formation of the "largest bloc" and the nomination of an agreeable figure to head the new government, especially if Tehran's support for the Maliki-Amiri axis was established, against Washington's support for the Sadr-Hakim-Abadi axis.