Why Massoud Barzani returned to Baghdad

After a long breakup, KDP leader Massoud Barzani returned to Baghdad to strengthen Kurdistan's position in the capital. 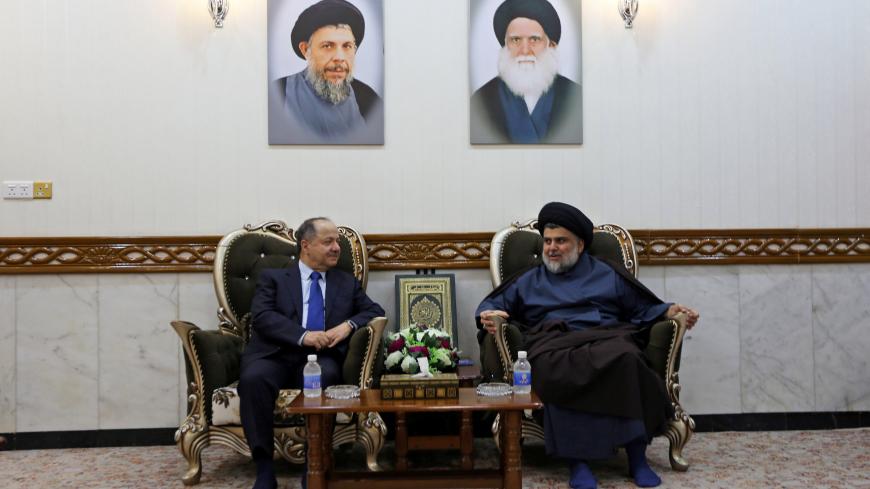 BAGHDAD — Kurdistan Democratic Party (KDP) leader Massoud Barzani visited Baghdad Nov. 22. With that visit, he ended an entire year of accusations and threats between himself and federal authorities that followed the September 2017 referendum on the independence of the Kurdistan Region.

Shortly after his return from Baghdad, Barzani said new Prime Minister Adel Abdul Mahdi was more understanding and cooperative than Haider al-Abadi was when it came to Kurdish issues and resolving them.

Barzani then headed to Najaf to meet with Muqtada al-Sadr, leader of the Sadrist movement. This let slip a new policy that Barzani might be planning to adopt in light of the current changes represented by the federal forces imposing control on Kirkuk, the disputed areas and border crossings, in addition to the coming adoption of the 2019 general budget and Baghdad's insistence on reducing the Kurdistan Regional Government's (KRG) share to less than 17%.

KDP leader Muhsin al-Sadoun told Al-Monitor, “Barzani discussed with Abdul Mahdi and leaders of the parliamentary blocs outstanding issues between Baghdad and Erbil, but the main reason for the visit is his desire to activate the role of the political party in the negotiations between the blocs. His meeting with Sadr was to mediate and put an end to the deadlock in negotiations in order to form the government.”

Speaking about the possibility of forming a political alliance that includes Barzani, State of Law Coalition leader Nouri al-Maliki and Fatah Alliance leader Hadi al-Amiri, Sadoun said, “The current understandings do not rise to the level of an alliance, but Barzani intends to open an office in Baghdad to keep communication channels open — especially since his party is a key partner in the new government.”

Sadoun pointed out, “Through Barzani’s visit to Baghdad, the KDP wanted to give importance to the idea of participating in the state administration by taking part in the government and playing the largest political role in the country.”

While Barzani wanted to move past disputes with Shiite parties, tension with the Patriotic Union of Kurdistan (PUK) arose since the latter saw a connection between the timing of Barzani’s visit to Baghdad and President Barham Salih’s flight to the Italian capital of Rome, which means Barzani might have chosen this specific time so he can avoid meeting with Salih.

Barzani’s party strongly opposed Salih's candidacy for the presidency and considered it an abuse of the partnership between the two parties in the administration of the KRG — especially after Barzani’s candidate for the same post, Fouad Hussein, lost.

PUK leader Ghiyath al-Surji told Al-Etejah TV, “Barzani's visit came in order to serve the KDP’s interests and strengthen its influence. He took advantage of President Salih’s absence so he would not have to meet with him.”

He noted that Barzani does not want to achieve the interests of the Kurdish people and instead chose to be devious. The PUK does not fear any action or conspiracy against it because it only asks for its own entitlement and gains in Baghdad, Surji said.

The agreement on activating the Kirkuk oil pipeline to the Turkish port of Ceyhan through the KRG is only common interest between the federal government and the KRG. Up until recently, this oil would be exported to Iran by road through the province of Sulaimaniyah where the PUK headquarters are located. Meanwhile, the PUK strongly opposed the export of Kirkuk oil to Turkey, saying that Barzani’s party controls all financial benefits and does not evenly distribute them.

However, the recent US sanctions on Iran restored the pipeline’s importance and thus rebuilt the relationship between the federal government and the KRG.

Although Barzani received a warm welcome both in Baghdad and Najaf, his demands are far from being met — at least in the foreseeable future. He is asking to increase the KRG’s share of the general budget from 14% to 17%, and for the federal forces and the Popular Mobilization Units (PMU) to withdraw from Kirkuk and the rest of the disputed areas so peshmerga forces can return. However, the majority of political parties in the federal parliament are from PMU factions, which opposed the referendum on the KRG’s independence; its military factions remain present in those areas.

Hunain al-Qaddo, a parliament member for Al-Binaa Alliance, told Al-Monitor, “The demands to withdraw the federal forces contradict the [Iraqi] Constitution, which stipulates in Article 121 the right of the federal forces to move freely in all areas of the country and that the peshmerga forces move within the KRG exclusively.”

He added, “The rest of the demands, such as the KRG’s share and the distribution of imports, are subject to the equivalence of the ratios and statistics available to the population, and there is no room for manipulating them at the expense of the disadvantaged areas.

Qaddo noted, “The disputed areas need to amend the constitution instead of going into political negotiations.”

However, Barzani is convinced that it would be difficult to restore the status quo that prevailed before the referendum and implement or amend Article 140 concerning the disputed areas.

He seeks to achieve political influence in the capital, which could allow him to obtain the possible gains he desires instead of resorting to confrontation.

This is particularly convenient since Barzani felt a bit left out when the overwhelming majority of parliamentary blocs preferred Salih, a PUK candidate, over his candidate, Hussein.

KDP leader Riban Salam revealed the proposal that Barzani presented to Baghdad leaders to form a “supreme policy council,” including the leaders of the blocs and the three presidencies to plan the country's policies. Salam said this was an attempt to give a more effective role to Barzani’s party, particularly following the recent elections, after which new political alliances emerged and kind of steered clear of the usual sectarian and national division that has plagued Iraq since 2003 and which over the past years has allowed Kurds to be an “equilibrium” for the political process.