Baghdad and Iraqi Kurdistan representatives have held a series of high-level meetings to try to resolve their longstanding issues, but so far without much apparent success. 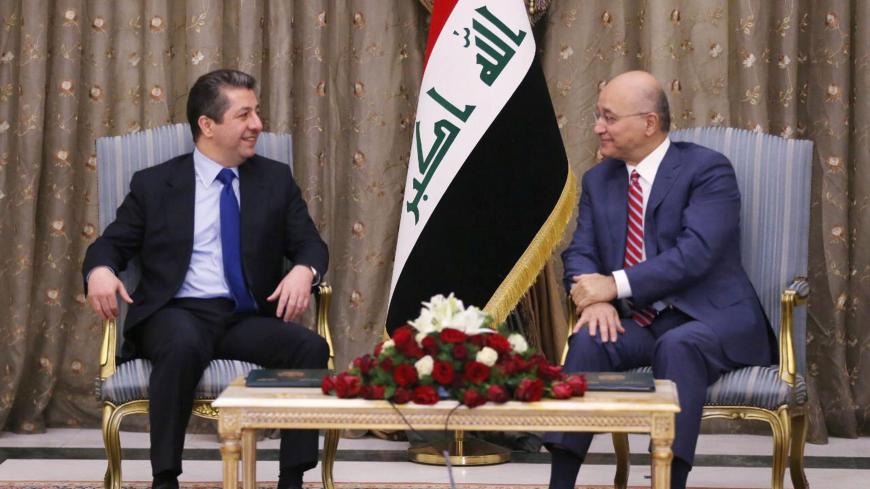 Iraqi President Barham Salih meets with Masrour Barzani, prime minister of Iraqi Kurdistan, in Baghdad, July 16, 2019. - The Presidency of the Republic of Iraq Office/Handout via REUTERS

BAGHDAD — Meetings last month between representatives of Iraq's federal government in Baghdad and the Kurdistan Regional Government (KRG) in Erbil failed to produce any clear resolutions of their ongoing differences.

A high-level delegation from the Baghdad government visited Erbil on July 25 for talks with the newly elected government there. Discussions focused on KRG oil exports, its share of the federal budget and control of disputed, oil-rich Kirkuk. The Baghdad representatives included Oil Minister Thamer Ghadhban and Finance Minister Fouad Hussein, national security adviser Faleh al-Fayadh and the director of the prime minister's office, Mohammed al-Hashemi.

Masrour Barzani had begun his tenure as KRG prime minister by leading a senior Kurdish delegation on a visit to Baghdad on July 16, less than a week after the KRG Cabinet received a parliamentary vote of confidence. Barzani met with President Barham Salih and various ministers and parliament deputies to discuss various potential solutions to their disagreements that would satisfy all sides, especially with regard to the KRG’s inability to fulfill its oil quota under the current year’s budget. The KRG is obliged to provide 250,000 barrels a day to the federal government in return for Baghdad funding KRG employee salaries.

“The federal government praises the spirit of cooperation and understanding with the KRG and local governments to promote integration and solve all problems for the benefit of all Iraqis in line with the Constitution and the unity of our people and our country,” Iraqi Prime Minister Adel Abdul Mahdi said in a statement after meeting with Barzani.

As with KRG President Nechirvan Barzani’s visit to Baghdad in June, the July visits did not yield tangible results. Still, the meetings reflect the Kurds' desire to settle their situation with the central government after the tensions and conflict generated by the 2017 independence referendum in Iraqi Kurdistan.

The visits also revealed the difficulties Abdul Mahdi, known for his good relations with the Kurds, is having in implementing decisions that would be favorable for the KRG due to the conflicting interests of the political blocs in his government. For example, the Iran-backed Fatah bloc refuses to oust the Iran-friendly Popular Mobilization Units (PMU) from the city of Kirkuk, as the KRG desires, so they can be replaced with Kurdish peshmerga. Other blocs from the central and southern provinces object to releasing the KRG from its oil obligations under the federal budget law. They believe this would be unfair to other oil-producing provinces, such as Basra and Maysan, since the Kurds do not share their oil or oil revenues with the rest of the country. Baghdad capitulating on the oil-for-salaries arrangement would lead to some parties raising objections and complicating passage of the next budget law.

The most important outcome of the meetings between Baghdad and Erbil was the announcement of upcoming technical dialogue sessions, at the level of specialized committees, aimed at continuing to try to resolve their differences on the oil exports, the budget and Kirkuk. Haneen al-Qaddu, a member of parliament from Fatah, told Al-Monitor that he does not expect the technical committees to suggest a solution that circumvents the oil-for-salaries structure. He asserted that next year's budget will not include federal payments to the KRG unless Erbil settles its oil dues for 2019.

Parliament member Mahdi Abdul Karim from the Kurdistan Democratic Party (KDP) asserted that resolving this particular issue requires examining the relationship between Baghdad and Erbil for the past decade and considering why, in his and some others' view, the KRG had begun exporting oil directly, without coordinating with the federal government, a move that greatly angered Baghdad.

“The KRG did not get its due share of the budget over the past years, so it had to search for other sources of funding,” Abdul Karim argued, seeming to absolve the KRG and stressing the need to promulgate the oil and gas law based on the Iraqi Constitution to avoid controversy over oil extraction and export in the productive provinces.

Al-Monitor learned from a source familiar with Barzani’s talks in Baghdad that the topic of filling the post of Kirkuk governor was raised in talks. The office has been headed by a caretaker since 2017, when in the aftermath of the independence referendum, Baghdad dispatched the military to seize Kirkuk and remove the separatist governor.

“KDP leader Massoud Barzani [Masrour's father] had proposed appointing a governor in an agreement between Baghdad and Erbil to resolve the dispute between the constituent blocs of the Kirkuk Provincial Council,” the source told Al-Monitor. In the meantime, the Kurdish blocs in the Kurdistan parliament agreed to name Tayeb Jabbar to the post on July 11, as part of a deal to form the KRG Cabinet, subject to the approval of the Arab and Kurdish blocs in Kirkuk province. The other blocs rejected Jabbar and said the Kurdish blocs’ agreement “reflected a policy of hegemony and unilateral decision making.”

According to the source, the parties Barzani met with in Baghdad promised to discuss the nomination of a new Kirkuk governor with the Turkmen and Arab blocs and parties in the province. The blocs, however, are convinced that the discussions will renew tensions in the disputed area and that the best option is to wait for local elections, scheduled for early next year. Meanwhile, Barzani wants to appoint a Kurd close to his party to lead administer Kirkuk.

Erbil has a new trump card that it could probably use in the negotiations on oil and Kirkuk: special grades positions, estimated at 5,000 jobs in the Iraqi state. It is rumored that discussions are being held among the federal parliament blocs to allocate certain positions according to a quota system. According to leaks, Kurdish blocs wan to appoint the chief of staff of the Iraqi army, but might compromise on some other positions in return for oil-related exemptions or Kurdish influence in Kirkuk.

If the crisis between Baghdad and Erbil surges after the 2019 budget law is approved, it will most likely lead the Kurds to withdraw their support for Abdul Mahdi. Meanwhile, the prime minister’s government faces parliamentary opposition and ongoing popular protests that are expected to broaden in light of its continuing failures in the areas of security, reconstruction and water and electric services.