The Iraqi Kurdistan government is trying to calm protesters' demands for the central government's prime minister to be removed. 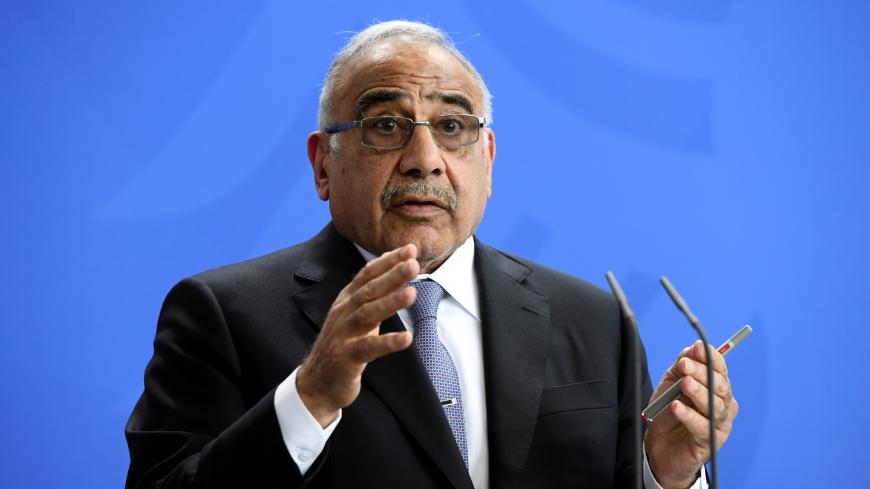 BAGHDAD — As demonstrations against government corruption worsen in Iraq, Prime Minister Adel Abdul Mahdi is calling for a Cabinet reshuffle, and Kurdish leaders are trying to quell protesters' calls for his ouster, at least for now.

Negotiations continue between the Iraqi Kurdistan government in Erbil and federal officials in Baghdad. Erbil opposes the demands of demonstrators in Baghdad and the southern provinces to dismiss the central government. However, Erbil recognizes the legitimacy of the rest of the demands, in particular the need for political and economic reform.

The stated official position of the Kurdistan Regional Government (KRG) on the protests that have been taking place in Iraq since Oct. 1 is support for the "right to peaceful demonstration."

During an Oct. 8 meeting with Wataniya (National) Coalition leader Ayad Allawi, Kurdistan Democratic Party (KDP) chief Massoud Barzani said any change in the political process must come within the constitutional framework and through democratic mechanisms. He expressed support for the current government headed by Abdul Mahdi, despite efforts by certain political forces — such as the Sairoon alliance, the Nasr Coalition and the Iraqi Forces Union — to adopt protesters' demands to change the government.

"Peaceful demonstrations are a constitutional right," the KRG prime minister said. "The escalation of the situation in the country and the region is in no one's interest." He added that dialogue was continuing with the central government in Baghdad.

Rebwar Hadi, who represents the Kurdish bloc in the Iraqi parliament, said, "The current government needs time to prove its seriousness in fulfilling the legitimate demands of the demonstrators and it does not take responsibility for all the failures in the country."

He added, “There are demands we are seeking to meet and the decision of dismissing the government is up to the parliament, but only after giving an opportunity to the reforms package announced by Abdul Mahdi."

This is the same position expressed by Rebin Salam, a member of the KDP, which is the ruling party in Erbil. He told Al-Monitor, "The government still hasn't assumed its true role due to the pressures that the parties are putting on it. Prime Minister Adel Abdul Mahdi is not responsible for the bad situation because he inherited a heavy legacy from his predecessors," as shown by the division among the country's ethnic and religious groups.

Salam said the KDP "supports the prime minister and his government to overcome this crisis, and we believe that the dismissal of the current government would cause chaos and instability in the Iraqi political scene."

Abdul Mahdi has announced a series of reforms to curtail protesters' anger. The most prominent proposals involve the formation of a high committee for the distribution of residential land, and the draft budget law for 2020, which would suspend laws and regulations that allow some government workers to receive more than one salary, pension or grant and instead make people choose just one of them.

However, Kurdish leader and former Iraqi Finance Minister Hoshyar Zebari wrote in a tweet that the government won't be able to fulfill its promises to the demonstrators. "Iraqi anti-government protests are continuing in different districts of Baghdad and the south," he said. "The pledges given by Iraq's three presidencies [Abdul Mahdi, President Barham Salih and parliament Speaker Mohammed al-Halbusi] to meet and quiet demonstrators are unworkable."

Zebari said the pledges would increase Iraq's 2020 budget deficit to more than $30 billion.

"Realism is needed," he added.

Meanwhile, Kurdish committees continue their negotiations with the federal ministries to try to resolve outstanding differences, especially the situation in Kirkuk regarding oil and the region's share of the public budget for the year 2020. Vian Sabri, head of the KDP delegation in the Iraqi parliament, announced that the visit of a high-level delegation from the Kurdistan region to Baghdad, set for Oct. 8, was postponed, as well as the visit of three parliament committees to the Kurdistan region, because of demonstrations in Iraq.

Baghdad and Erbil are about to sign an agreement for the KRG to hand over 250,000 barrels per day to the national oil company SOMO for six years in return for Baghdad's commitment to pay the salaries of the Kurdistan employees and allocate 13% of the coming years’ budgets to the Kurdish provinces.

Therefore, any change in the current government could mean that negotiations would go back to their starting point and that next year’s budget law would not satisfy the Kurdish side. Kurdish parties may take opposing positions if the Shiite blocs succeed in depriving the Kurdistan region of the 13% of the budget and in obligating Erbil to give a larger share of oil to the federal government.